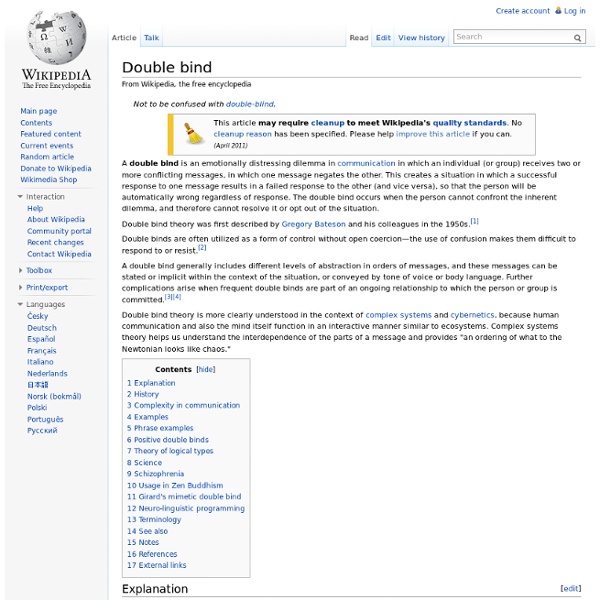 A double bind is an emotionally distressing dilemma in communication in which an individual (or group) receives two or more conflicting messages, in which one message negates the other. This creates a situation in which a successful response to one message results in a failed response to the other (and vice versa), so that the person will automatically be wrong regardless of response. The double bind occurs when the person cannot confront the inherent dilemma, and therefore can neither resolve it nor opt out of the situation. Double bind theory was first described by Gregory Bateson and his colleagues in the 1950s.[1] Double binds are often utilized as a form of control without open coercion—the use of confusion makes them both difficult to respond to as well as to resist.[2] Double bind theory is more clearly understood in the context of complex systems and cybernetics because human communication and the mind itself function in an interactive manner similar to ecosystems. History[edit]

Everything is connected Global warming, global terrorism, food crises, water crises, oil conflicts, culture wars - "civilisation" seems to be accelerating towards self-destruction. These are circumstances in which art and artists tend to get political or, alternatively, resign themselves to insignificance. In literature, the phenomenon is exacerbated by the difficulty many people have reading for anything beyond content and immediately communicated emotion. At such a moment, it may be worth looking at the work of a man who had a rather unusual take on the relationship between art and politics, who saw the two as intimately related and mutually conditioning, art being allowed a certain, perhaps even pervasive, influence, but not in the crass sense of grinding an axe, or even exploring controversial situations; on the contrary, art might be most "useful" when, to all intents and purposes, most "irrelevant". Gregory Bateson (1904-80) was born into a family with a history of spirited scientific controversy.

Petrichor Petrichor (/ˈpɛtrɨkɔər/) is the earthy scent produced when rain falls on dry soil. The word is constructed from Greek, petra, meaning ‘stone’ + ichor, the fluid that flows in the veins of the gods in Greek mythology. In 2015, MIT scientists used high-speed cameras to record how the scent moves into the air.[5] The tests involved approximately 600 experiments on 28 different surfaces, including engineered materials and soil samples.[6] When a raindrop hits a porous surface, small bubbles form that float to the surface and release aerosols.[5] Such aerosols carry the scent as well as bacteria and viruses from the soil.[5] Raindrops that move at a slower rate tend to produce more aerosols; this serves as an explanation for why the petrichor is more common after light rains.[5] Some scientists believe that humans appreciate the rain scent because ancestors may have relied on rainy weather for survival.[7] References[edit] Jump up ^ Bear, I.J.; R.G. External links[edit]

Amor fati Amor fati is a Latin phrase loosely translating to "love of fate" or "love of one's fate". It is used to describe an attitude in which one sees everything that happens in one's life, including suffering and loss, as good. Moreover, it is characterized by an acceptance of the events or situations that occur in one's life. The phrase has been linked to the writings of Marcus Aurelius, who did not himself use the words (he wrote in Greek, not Latin).[1] The phrase is used repeatedly in Friedrich Nietzsche's writings and is representative of the general outlook on life he articulates in section 276 of The Gay Science, which reads: I want to learn more and more to see as beautiful what is necessary in things; then I shall be one of those who make things beautiful. It is important to note that Nietzsche in this context refers to "Yes-sayer", not in a political or social sense, but to the uncompromising acceptance of reality per se. See also[edit] References[edit]

Our Story | Mapping The Human Story The purpose of Mapping the Human Story is to explore and curate humanity’s traditions, wisdom and knowledge to sustain us today and give us every possible resource in the future. Simultaneously we are creating a Cultural Vault, a meta-library of culture to hold in trust and make accessible humanity’s heritage, wisdom and knowledge. Founder Dr. Elizabeth Kapu’uwailani Lindsey (pictured above, with Mau) is the first Polynesian Explorer and female Fellow in the history of the National Geographic Society. Elizabeth’s keen insight and first-hand accounts from the world’s most fragile regions make her international speaking engagements an inspiring call-to-action. On Elizabeth’s most recent expedition, she journeyed to Satawal, Micronesia where she recorded the traditions of the palu, Micronesian non-instrument navigators.

Slippery slope In logic and critical thinking, a slippery slope is a logical device, but is usually known under its fallacious form in which a person asserts that some event must inevitably follow from another without any rational argument or demonstrable mechanism for the inevitability of the event in question. A slippery slope argument states that a relatively small first step leads to a chain of related events culminating in some significant effect, much like an object given a small push over the edge of a slope sliding all the way to the bottom.[1] The strength of such an argument depends on the warrant, i.e. whether or not one can demonstrate a process which leads to the significant effect. The fallacious sense of "slippery slope" is often used synonymously with continuum fallacy, in that it ignores the possibility of middle ground and assumes a discrete transition from category A to category B. Modern usage avoids the fallacy by acknowledging the possibility of this middle ground. Examples[edit]

review_book_chan_canasta Chan Canasta - A Remarkable Man By David Britland Published by Martin Breese Reviewed by Andy Nyman Once in a while a book comes along that, no matter what the cost, simply must be purchased. Before reviewing the book I must state one fundamental problem I have with the publication. Despite my own moral dilemma I couldn't wait to read this book. Every effect in the book is a masterclass in taking an effect and turning it into a mind-blowing experience. The over powering feeling one gets from this book is the image of a man who is prepared to risk everything for the effect. Martin Breese has published yet another magnificent book. © Andy Nyman September 2000

The Tibetan Book of the Dead By Kevin Williams The Tibetan Book of the Dead, whose actual title is "The Great Liberation upon Hearing in the Intermediate State" or "Bardo Thodol", is traditionally believed to be the work of the legendary Padma Sambhava in the 8th century A.D. The book acts as a guide for the dead during the state that intervenes death and the next rebirth. The Bardo Thodol teaches that once awareness is freed from the body, it creates its own reality as one would experience in a dream. The following is a description of the bardo realms that one travels through after death. 1. The first bardo comes at the very moment of death, when there dawns the Clear Light of the Ultimate Reality. 2. If the soul is still not liberated at this stage, it will descend into the second bardo, which is said to last for two weeks. On the second day, there appears the second-highest God in the Buddhist pantheon - in fact, he is actually the Second Person in the literal Buddhist Holy Trinity. 3.

Arthur Tansley Early life and education[edit] Tansley was born in London to businessman George Tansley[6] and his wife Amelia. Although a successful businessman, George Tansley's passion had been education after he started attending classes at the Working Men's College when he was 19. George Tansley later went on to be a volunteer teacher, retiring from his business in 1884 to dedicate himself to teaching at the college. He married Amelia Lawrence in 1863 and had two children – the older a daughter, Maud, followed by Arthur seven years later, in 1871.[2] Tansley's interest in science was sparked by one of his father's fellow volunteer-teachers, who was described as "an excellent and enthusiastic field botanist". Professional career[edit] Tansley taught at University College London from 1893 until 1907. Major contributions[edit] In 1913, the British Vegetation Committee organised the British Ecological Society (BES), the first-ever professional society of ecologists. Personal life[edit] Notes[edit] Hugh M.

The Politics of Experience The Politics of Experience and The Bird of Paradise is a 1967 book by Scottish psychiatrist R.D. Laing, comprising two essays. The work was inspired by Laing’s extensive experimentation with LSD.[1] Summary[edit] Laing examines and challenges the idea of normality in modern society, and argues that it is not people who are mad, but the world.[2][3] He presents psychosis as "a psychedelic voyage of discovery in which the boundaries of perception were widened, and consciousness expanded".[1] Influence[edit] The Politics of Experience is Laing's best-known book.[2] References[edit]

27th Sept - An Ecology of Mind, with Nora Bateson | Gaia Foundation An Ecology of Mind is a film portrait of Gregory Bateson, celebrated anthropologist, philosopher, author, naturalist, systems theorist, and filmmaker, produced and directed by his daughter, Nora Bateson. The film includes footage from Bateson's own films shot in the 1930s in Bali (with Margaret Mead) and New Guinea, along with photographs, filmed lectures, and interviews. His youngest child, Nora, depicts him as a man who studied the interrelationships of the complex systems in which we live with a depth motivated by scientific rigor and caring integrity. Nora Bateson's rediscovery of his work documents the vast - and continuing - influence Bateson's thinking has had on the work of an amazingly wide range of disciplines. This film hopes to inspire its audience to see our lives within a larger system - glistening with symmetry, play, and metaphor.

Mircea Eliade-biography etc. 1 Life Mircea Eliade was born in Bucharest, Romania on 13 March 1907. Although Romanian records give his date of birth as 28 February, this is according to the Julian calendar, since the Gregorian calendar was not adopted in Romania until 1924. In 1925 Eliade enrolled at the University of Bucharest where he studied in the department of philosophy. Eliade's Master's thesis examined Italian Renaissance Philosophers from Marcilio Ficino to Giordano Bruno, and Renaissance Humanism was one of his major influences when he turned to India in order to "universalize" the "provincial" philosophy he had inherited from his European education. He returned to Bucharest in 1932 and successfully submitted his analysis of Yoga as his doctoral thesis at the Philosophy department in 1933. After the Second World War, during which he served with the Romanian Legation in the UK and Portugal, Eliade was unable to return to the newly communist Romania because of his connection with the right-wing Ionescu.