How to Take the 'Con' Out of 'Conflict' Many business leaders don't like conflict and try to sweep it under the rug, albeit unconsciously. 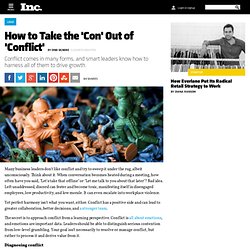 Think about it. When conversation becomes heated during a meeting, how often have you said, "Let's take that offline" or "Let me talk to you about that later"? Bad idea. Left unaddressed, discord can fester and become toxic, manifesting itself in disengaged employees, low productivity, and low morale. It can even escalate into workplace violence. Yet perfect harmony isn't what you want, either. The secret is to approach conflict from a learning perspective. Diagnosing conflict Understanding the source of conflict is helpful because it enables you to separate signal from noise. --Internal, meaning conflict within an individual. --Interpersonal, which occurs between two or more individuals. --Intergroup, which occurs in more mature companies when different departments are competing with each other, such as marketing being at odds with operations. Yes-men need not apply 1. 2. Managing Two People Who Hate Each Other - Liane Davey. By Liane Davey | 2:00 PM June 9, 2014 Managing people is never easy, but when the animosity between two of your direct reports escalates to the level of hatred, how do you minimize the drama and keep your team on track? 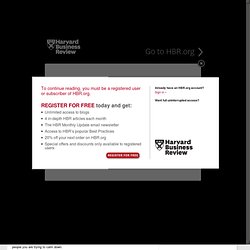 Before you call for a professional mediator, remember that this is a fundamental part of your job as a manager. If you can get to the root of your employees’ fear, you can help them rebuild their relationship. And if you do it the right way, the shared vulnerability will start to foster trust in place of hate. Try the following approach to get at the root of the problem and resolve the conflict once and for all: Before addressing the interpersonal tension between your two direct reports, it’s important to ensure the conflict isn’t stemming from more systemic issues. Then, before you talk to them, spend a moment thinking about your own frustration with and judgments about them.

Use the answers to your questions to uncover clues about the root causes of the animosity. Most Work Conflicts Aren't Due to Personality - Ben Dattner. Conflict happens everywhere, including in the workplace. 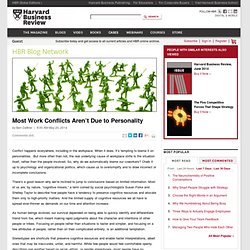 When it does, it’s tempting to blame it on personalities. But more often than not, the real underlying cause of workplace strife is the situation itself, rather than the people involved. So, why do we automatically blame our coworkers? Chalk it up to psychology and organizational politics, which cause us to oversimplify and to draw incorrect or incomplete conclusions. There’s a good reason why we’re inclined to jump to conclusions based on limited information.

As human beings evolved, our survival depended on being able to quickly identify and differentiate friend from foe, which meant making rapid judgments about the character and intentions of other people or tribes. Stereotypes are shortcuts that preserve cognitive resources and enable faster interpretations, albeit ones that may be inaccurate, unfair, and harmful. So what’s the right approach to resolving conflicts at work? How to Recover After a Big Fight at Work. To Resolve a Conflict, First Decide: Is It Hot or Cold? - Mark Gerzon. As a leader, you’re going to face conflict. 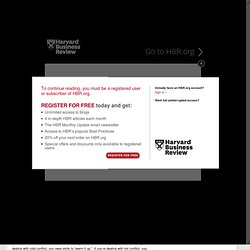 It comes with the territory. But before you try to deal with a conflict, you first need to stop and ask yourself the following question: Is it hot or cold? To help you answer this vital question, consider these two definitions: Hot conflict is when one or more parties are highly emotional and doing one or more of the following: speaking loudly or shouting; being physically aggressive, wild or threatening; using language that is incendiary; appearing out of control and potentially explosive. Cold conflict is when one or more parties seem to be suppressing emotions, or actually appear “unemotional,” and are doing one or more of the following: muttering under their breath or pursing their lips; being physically withdrawn or controlled; turning away or otherwise deflecting contact; remaining silent or speaking in a tone that is passively aggressive; appearing shut down or somehow frozen.

Neither of these types of conflict is constructive. 1. 2. 3.