ISIS Leader Admits to Being Funded by the US. In early 2015, Yousaf al Salafi, a man believed to be the Pakistani commander of the Islamic State, confessed during investigations that he has been receiving money through the United States. 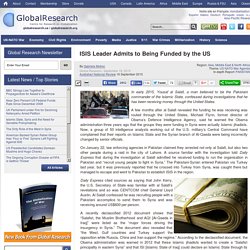 A few months after al Salafi revealed the funding he was receiving was routed through the United States, Michael Flynn, former director of Obama’s Defence Intelligence Agency, said he warned the Obama administration three years ago that the groups they were funding in Syria were actually Islamic jihadists. Now, a group of 50 intelligence analysts working out of the U.S. military’s Central Command have complained that their reports on Islamic State and the Syrian branch of Al-Qaeda were being incorrectly changed by senior officials. On January 22, law enforcing agencies in Pakistan claimed they arrested not only al Salafi, but also two other people during a raid in the city of Lahore. Daily Express cited sources as saying that John Kerry, the U.S. Bombing is immoral, stupid and never wins wars. Syria is the latest victim. The British government will shortly ask parliament to approve its sixth war of overseas intervention in just two decades. 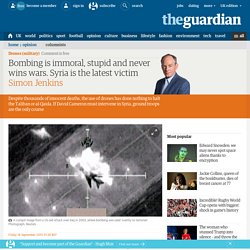 The victim will be Syria. Such a war is incoherent. The “enemy” appears to be both sides in a civil war – Islamic State and the Syrian regime. Worse, the war will be limited to the cruellest, most destructive and strategically most useless of weapons, the airborne bomb. Russia is not the enemy. Real enemies are a threat to any country, but imagined enemies can be even more dangerous. 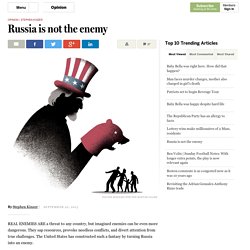 They sap resources, provoke needless conflicts, and divert attention from true challenges. The United States has constructed such a fantasy by turning Russia into an enemy. Our current campaign against Russia was set off by what some in Washington call its “aggression” against neighboring Ukraine. Is the U.S. Secretly Welcoming Increased Russian Syria Involvement? Col. 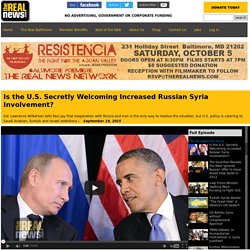 Lawrence Wilkerson tells Paul Jay that cooperation with Russia and Iran is the only way to resolve the situation, but U.S. policy is catering to Saudi Arabian, Turkish and Israeli ambitions - Bio Lawrence Wilkerson is a retired United States Army soldier and former chief of staff to United States Secretary of State Colin Powell. Wilkerson is an adjunct professor at the College of William & Mary where he teaches courses on US national security. He also instructs a senior seminar in the Honors Department at the George Washington University entitled "National Security Decision Making. " Transcript PAUL JAY, SENIOR EDITOR, TRNN: Welcome to the Real News Network. End. “The Russians are Coming“ :    Information Clearing House - ICH. “The Russians are Coming“ By Eric Margolis September 18, 2015 "Information Clearing House" - "Lew Rockwell" - The Russians are coming! 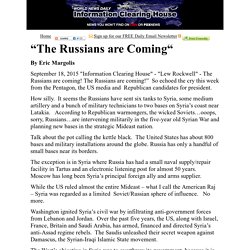 The Russians are coming!” So echoed the cry this week from the Pentagon, the US media and Republican candidates for president. How silly. Talk about the pot calling the kettle black. The exception is in Syria where Russia has had a small naval supply/repair facility in Tartus and an electronic listening post for almost 50 years. While the US ruled almost the entire Mideast – what I call the American Raj – Syria was regarded as a limited Soviet/Russian sphere of influence. Washington ignited Syria’s civil war by infiltrating anti-government forces from Lebanon and Jordan. 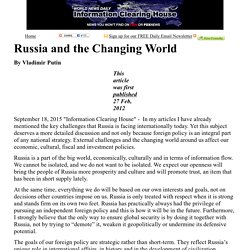 Yet this subject deserves a more detailed discussion and not only because foreign policy is an integral part of any national strategy. External challenges and the changing world around us affect our economic, cultural, fiscal and investment policies. Russia is a part of the big world, economically, culturally and in terms of information flow. At the same time, everything we do will be based on our own interests and goals, not on decisions other countries impose on us. The goals of our foreign policy are strategic rather than short-term. We will also seek to avoid unnecessary shocks as a new world order emerges based on the new geopolitical reality.

Who undermines trust? We often hear that human rights are more important than national sovereignty. Obama’s Fateful Syrian Choice  :    Information Clearing House - ICH. Obama’s Fateful Syrian Choice President Obama faces a choice that could define his legacy and the future of the American Republic: He can either work with Russia’s President Putin to stabilize Syria or he can opt for a confrontation that could lead to an open-ended war with grave risks of escalation, writes Robert Parry. 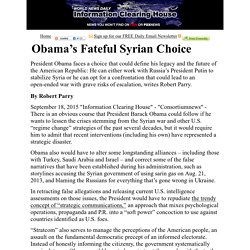 By Robert Parry September 18, 2015 "Information Clearing House" - "Consortiumnews" - There is an obvious course that President Barack Obama could follow if he wants to lessen the crises stemming from the Syrian war and other U.S. “regime change” strategies of the past several decades, but it would require him to admit that recent interventions (including his own) have represented a strategic disaster.