How to Choose Colours Procedurally (Algorithms) 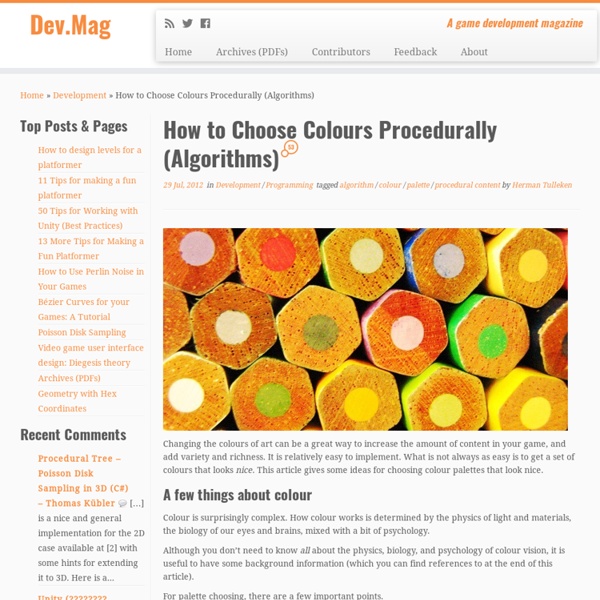 Changing the colours of art can be a great way to increase the amount of content in your game, and add variety and richness. It is relatively easy to implement. What is not always as easy is to get a set of colours that looks nice. This article gives some ideas for choosing colour palettes that look nice. A few things about colour Colour is surprisingly complex. Although you don’t need to know all about the physics, biology, and psychology of colour vision, it is useful to have some background information (which you can find references to at the end of this article). For palette choosing, there are a few important points. Digital colour theory differs considerably from theories based on pigments (or chemicals, or metals in crystals). Vector distances in RGB and many other colour models don’t correspond to differences in perception. Edit: Turns out I have fallen prey to the very thing I talk about. Brightness These greys are equally spaced. Hue differentiation. Colour harmony theory. 1. 2. 3.

Theory Part 1: The Meaning of Color Color in design is very subjective. What evokes one reaction in one person may evoke a very different reaction in somone else. Sometimes this is due to personal preference, and other times due to cultural background. Color theory is a science in itself. Why YouTube buffers: The secret deals that make—and break—online video Lee Hutchinson has a problem. My fellow Ars writer is a man who loves to watch YouTube videos—mostly space rocket launches and gun demonstrations, I assume—but he never knows when his home Internet service will let him do so. "For at least the past year, I've suffered from ridiculously awful YouTube speeds," Hutchinson tells me. "Ads load quickly—there's never anything wrong with the ads!—but during peak times, HD videos have been almost universally unwatchable.

modern color theory (concepts) A Scientific Theory of Color Vision. For many centuries, the behavior of color mixtures was difficult to explain because material color, which seemed to be anchored in "real" objects of the external world, was conceptually distinguished from the "illusory" colors in rainbows or prisms. The two types of mixtures behaved differently, but the reason for the difference was unknown.

On Vision and Colors On Vision and Colors (German: Über das Sehn und die Farben) is a treatise[1] by Arthur Schopenhauer that was published in May 1816 when the author was 28 years old. Schopenhauer had extensively discussed with Johann Wolfgang von Goethe about the poet's Theory of Colours of 1810, in the months around the turn of the years 1813 and 1814, and basically shared Goethe's views.[2] The initial basis for Schopenhauer's color theory comes from Goethe's chapter on physiological colors, which discusses three principal pairs of contrasting colors: red/green, orange/blue, and yellow/violet. This is in contrast to the customary emphasis on Newton's seven colors of the Newtonian spectrum. In accordance with Aristotle, Schopenhauer considered that colors arise by the mixture of shadowy, cloudy darkness with light. With white and black at each extreme of the scale, colors are arranged in a series according to the mathematical ratio between the proportions of light and darkness.

Essential Math for Games Programmers As the quality of games has improved, more attention has been given to all aspects of a game to increase the feeling of reality during gameplay and distinguish it from its competitors. Mathematics provides much of the groundwork for this improvement in realism. And a large part of this improvement is due to the addition of physical simulation. Creating such a simulation may appear to be a daunting task, but given the right background it is not too difficult, and can add a great deal of realism to animation systems, and interactions between avatars and the world. This tutorial deepens the approach of the previous years' Essential Math for Games Programmers, by spending one day on general math topics, and one day focusing in on the topic of physical simulation.

Colour theory explained Colour is such a pervasive part of everything we visually encounter in the world, that for many designers it becomes an intuitive choice. If you think back to primary/elementary school though, you'll recall being told that there are three 'primary' colours – Red, Yellow, and Blue. We were all taught that any colour can be created by mixing these three colours in varying quantities. It turns out this isn't quite right (although it's still workable enough in practice to be taught the world over to five-year-olds). 25 stunning poster designs to inspire you

Kim Jong-il's Sushi Chef Kenji Fujimoto: Newsmakers The sushi chef was leaving his apartment when he noticed the stranger outside. He could tell by the man's suit—black and badly made—that he was North Korean. Right away, the chef was nervous. Even in his midsixties, the chef is a formidable man: He has thick shoulders, a broad chest; the rings on his strong hands would one day have to be cut off. But he'd long since quit wearing his bulletproof vest, and the last time a North Korean made the journey to visit him in Japan, a decade ago, he was there to kill him. The stranger came closer. Understand color theory with these 7 facts - = Designer Blog Color is everywhere – in nature, in cities, in stores, online. We’re so used to it we often don’t notice it’s even there, until we suddenly come across a black and white movie on TV. Then we remember how good it is that we have such a colorful world. For that reason alone, if not for improving your design skill set, knowing how color works is a good thing to do. So let’s dive in!

Fine art Fine art, from the 17th century on, has meant art forms developed primarily for aesthetics, distinguishing them from applied arts that also have to serve some practical function. Historically, the 5 main fine arts were painting, sculpture, architecture, music and poetry, with performing arts including theater and dance.[1] Today, the fine arts commonly include additional forms, such as film, photography, conceptual art, and printmaking. However, in some institutes of learning or in museums, fine art and frequently the term fine arts (pl.) as well, are associated exclusively with visual art forms.[citation needed] The word "fine" does not so much denote the quality of the artwork in question, but the purity of the discipline.[citation needed] This definition tends to exclude visual art forms that could be considered craftwork or applied art, such as textiles.

Glass The hardware looks much better in person than I expected. In fact, I would even say it looks good. The industrial design is solid, and though it is being manufactured in small batches, it has the build quality you might expect from something being mass-produced. I found this pleasantly shocking, especially considering Google’s history of lackluster attention to detail. Color Sphere Color Sphere was one of my 1st HTML5 projects, way back in 2007. Well, the years passed, browsers sped up, my hair grew longer, and nothing changed on Color Sphere… but the time has come! The latest rendition is bigger (easier to see), more accurate (pixel perfect), and looks really cool when you switch it to Websafe mode and move the Saturation slider around The colors in Color Sphere are mapped to HSL. The luminance is the radius from the center, the hue is the angle, and the saturation controls the z-index; that is to say, the zoom into the HSL color space. Technically, it’s more of a color cylinder.

Beyond Pink and Blue: A Look at Gender Colors It goes beyond culture. There is science behind the gender-relationships when it comes to colors. A study by John Hallock compares the color preferences among various demographics and takes into account information collected from 22 countries. Our friends at KissMetrics put together this informative infographic that tears down the gender barriers to reveal what really goes on in visualizations. Click any portion to enlarge. Colors by Gender The inside story of ESGN's fall In early 2013, a 32-year-old Brit named Rory Dickenson moved to Berlin to work a pair of short-term freelance jobs. But he hadn't been there long when he found an opportunity he couldn't ignore. A human resources service put Dickenson in touch with a company calling itself the Esports Global Network.

Goethe on the Psychology of Color and Emotion Color is an essential part of how we experience the world, both biologically and culturally. One of the earliest formal explorations of color theory came from an unlikely source — the German poet, artist, and politician Johann Wolfgang von Goethe, who in 1810 published Theory of Colors (public library; public domain), his treatise on the nature, function, and psychology of colors. Though the work was dismissed by a large portion of the scientific community, it remained of intense interest to a cohort of prominent philosophers and physicists, including Arthur Schopenhauer, Kurt Gödel, and Ludwig Wittgenstein. One of Goethe’s most radical points was a refutation of Newton’s ideas about the color spectrum, suggesting instead that darkness is an active ingredient rather than the mere passive absence of light. YELLOWThis is the color nearest the light.