Dabrowski’s Theory and Existential Depression in Gifted Children and Adults 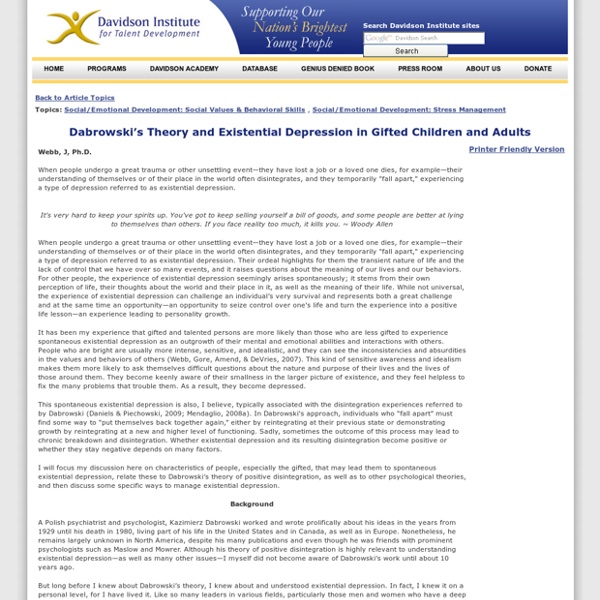 Misdiagnosis and dual diagnosis of gifted children Misdiagnosis and Dual Diagnosis of Gifted Children Authors: James T. Webb, Edward R. Amend, Nadia E. Citation: Abstracted from Misdiagnosis and Dual Diagnoses of Gifted Children and Adults: ADHD, bipolar, OCD, Asperger’s, depression, and other disorders. (2004) Scottsdale: Great Potential Press. Many gifted and talented children (and adults) are being mis-diagnosed by psychologists, psychiatrists, pediatricians, and other health care professionals. In some situations where gifted children have received a correct diagnosis, giftedness is still a factor that must be considered in treatment, and should really generate a dual diagnosis. Despite prevalent myths to the contrary, gifted children and adults are at particular psychological risk due to both internal characteristics and situational factors. Internal Factors First, let me mention the internal aspects (Webb, 1993). Situational Factors Situational factors are highly relevant to the problem of mis-diagnosis (Webb, 1993).

Overexcitability and the Gifted Overexcitability and the Gifted by Sharon Lind A small amount of definitive research and a great deal of naturalistic observation have led to the belief that intensity, sensitivity and overexcitability are primary characteristics of the highly gifted. These observations are supported by parents and teachers who notice distinct behavioral and constitutional differences between highly gifted children and their peers. The work of Kazimierz Dabrowski, (1902-1980), provides an excellent framework with which to understand these characteristics. Dabrowski, a Polish psychiatrist and psychologist, developed the Theory of Positive Disintegration as a response to the prevalent psychological theories of his time. OVEREXCITABILITIES Overexcitabilities are inborn intensities indicating a heightened ability to respond to stimuli. PSYCHOMOTOR OVEREXCITABILITY Psychomotor OE is a heightened excitability of the neuromuscular system. Show how to find the answers to questions.

An Error Occurred Setting Your User Cookie This site uses cookies to improve performance. If your browser does not accept cookies, you cannot view this site. Setting Your Browser to Accept Cookies There are many reasons why a cookie could not be set correctly. You have cookies disabled in your browser. Why Does this Site Require Cookies? This site uses cookies to improve performance by remembering that you are logged in when you go from page to page. What Gets Stored in a Cookie? This site stores nothing other than an automatically generated session ID in the cookie; no other information is captured. In general, only the information that you provide, or the choices you make while visiting a web site, can be stored in a cookie.

Your Brain Knows a Lot More Than You Realize | Memory, Emotions, & Decisions Meanwhile, a similar story was unfolding oceans away. During World War II, under constant threat of bombings, the British had a great need to distinguish incoming aircraft quickly and accurately. Which aircraft were British planes coming home and which were German planes coming to bomb? Several airplane enthusiasts had proved to be excellent “spotters,” so the military eagerly employed their services. These spotters were so valuable that the government quickly tried to enlist more spotters—but they turned out to be rare and difficult to find. The government therefore tasked the spotters with training others. It was a grim attempt. With a little ingenuity, the British finally figured out how to successfully train new spotters: by trial-and-error feedback. The Knowledge GapThere can be a large gap between knowledge and awareness. Consider patients with anterograde amnesia, who cannot consciously recall new experiences in their lives. What Douglas experienced is called anosognosia.

Contrasting and categorization of emotions The contrasting and categorisation of emotions describes how emotions are thought to relate to each other. Various recent proposals of such groupings are described in the following sections. Contrasting Basic Emotions[edit] The following table,[1] based on a wide review of current theories, identifies and contrasts the fundamental emotions according to a set of definite criteria. HUMAINE's proposal for EARL (Emotion Annotation and Representation Language)[edit] The emotion annotation and representation language (EARL) proposed by the Human-Machine Interaction Network on Emotion (HUMAINE) classifies 48 emotions.[2] Parrott's emotions by groups[edit] A tree-structured list of emotions was described in Parrott (2001).[3][unreliable source?] Plutchik's wheel of emotions[edit] Plutchik's Wheel of Emotions Robert Plutchik created a wheel of emotions in 1980 which consisted of 8 basic emotions and 8 advanced emotions each composed of 2 basic ones.[5] See also[edit] References[edit] External links[edit]

Counseling Gifted Adults – A Case Study Counseling Gifted Adults – A Case Study Gifted children are often identified by their insatiable curiosity, advanced mental ability, intensity, and thought-provoking questions. But what happens when these children become adults? What are they like and do they have any particular mental health needs? This paper uses a case study of one particular gifted adult to explain the typical issues these clients bring into counseling. Most of us can recognize precocious children by noticing any or all of the following: thought provoking questions, advanced vocabulary, avid reading, unstoppable curiosity, creative thinking, and unusual mental, academic, and/ or musical abilities. But what happens when these children become adults? The concept of giftedness, especially in adults, is unclear, complicated and controversial. In adults, as well as children, giftedness is a whole-person phenomenon. Case Background Susan had known that she was different since she was seven. This was unusual. Schooling

What Magnetic Fields Do to Your Brain and Body - The Crux (Credit: pippeeContributor/Shutterstock) There’s no escaping magnetic fields—they’re all around us. For starters, the Earth itself is like a giant magnet. A spinning ball of liquid iron in our planet’s core generates the vast magnetic field that moves our compass needles around and directs the internal compasses of migrating birds, bats, and other animals. On top of that, ever-industrious humans have produced artificial magnetic fields with power lines, transport systems, electrical appliances, and medical equipment. We may not be able to see, hear, feel, or taste the magnetic fields that surround us, but some may wonder whether they can still exert effects on our bodies and brains. Everyday Exposure A magnetic field arises whenever a charged particle, like an electron or proton, moves around. From time to time, a scientific study finds a link between living near high-voltage power lines and illness. An MRI machine. What’s the Threshold? Medical Magnets Out-of-this-World Magnetic Fields

Be nice not to have regular coherence collapse in order to progress! by soulfiremage Apr 3

This theory is a necessary tool to better understand that the gifted mind tend to go through frequent crisis as a normal developmental course. by coen_groupe4_psy Mar 22

Related:
Related:  Health Sensitivities   -  Everything in your mind