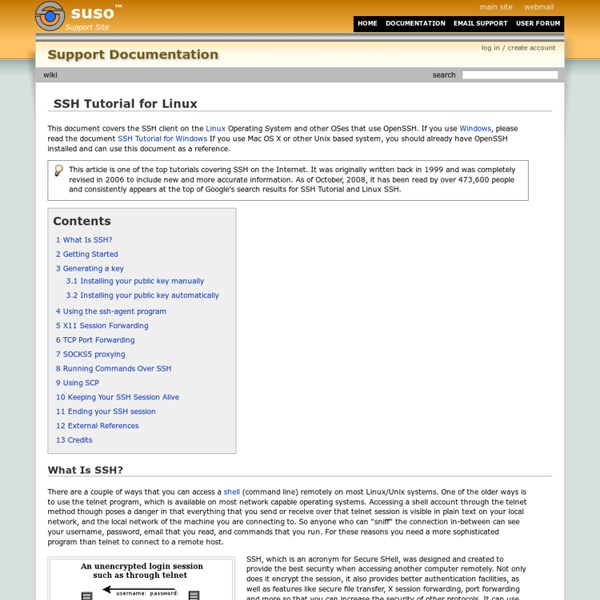 This document covers the SSH client on the Linux Operating System and other OSes that use OpenSSH. If you use Windows, please read the document SSH Tutorial for Windows If you use Mac OS X or other Unix based system, you should already have OpenSSH installed and can use this document as a reference. This article is one of the top tutorials covering SSH on the Internet. What Is SSH? There are a couple of ways that you can access a shell (command line) remotely on most Linux/Unix systems. An unencrypted telnet session SSH, which is an acronym for Secure SHell, was designed and created to provide the best security when accessing another computer remotely. An encrypted ssh session These two diagrams on the left show how a telnet session can be viewed by anyone on the network by using a sniffing program like Ethereal (now called Wireshark) or tcpdump. Getting Started This tutorial isn't going to cover how to install SSH, but will cover how to use it for a variety of tasks. Generating a key exit Related:  CMU 2015 • BashCommands

WPILibJ: edu.wpi.first.wpilibj.image.NIVision Class Reference Class for interfacing with the NIVision libraries. More... Class for interfacing with the NIVision libraries. Author dtjones Calculates the histogram of each plane of a color image and redistributes pixel values across the desired range while maintaining pixel value groupings. Parameters Convert the given image into a binary image true where the colors match the given thresholds. Counts the number of particles in a binary image. Returns The number of particles Cleans up resources associated with images, regions of interest (ROIs), arrays, and reports that you no longer need. After you dispose of something, you can no longer use it. Extract the color planes from the given source image into the given planes. Get the height of an image. The height of the image. Get the width of an image. The width of the image. Allocates space for and creates a new imaq image. a newly allocated pointer to an imaqImage Returns a measurement associated with a particle. The value of the requested measurement.

OpenSSH/Client Configuration Files Client configuration files can be per user or system wide, with the former taking precedence over the latter and run-time arguments in the shell overriding both. In these configuration files, one parameter per line is allowed with the parameter name followed by its value or values. Empty lines and lines starting with the hash (#) are ignored. An equal sign (=) can be used instead of whitespace between the parameter name and the values. Values are case-sensitive, but parameter names are not. System-wide Client Configuration Files[edit] System-wide client files set the default configuration for all users of OpenSSH clients on that system. run time arguments via the shelluser's own configurationsystem-wide configuration The first value obtained is used. /etc/ssh/ssh_config[edit] This file defines all the default settings for the client utilities for all users on that system. it must be readable by all users. Below a shortcut is made for connecting to arc.example.org. /etc/ssh/sshrc[edit]

FRC 2168 OpenCV library for the roboRIO and BeagleBone processors : WPILib OpenCV is the premier open source vision library and can be found in many commercial and research robots. From the OpenCV web site: “OpenCV is released under a BSD license and hence it’s free for both academic and commercial use. It has C++, C, Python and Java interfaces and supports Windows, Linux, Mac OS, iOS and Android. OpenCV was designed for computational efficiency and with a strong focus on real-time applications. Written in optimized C/C++, the library can take advantage of multi-core processing. FRC Team 2168 has done a build of OpenCV that is customized for the FRC competition robots that they are graciously contributing to the FIRST community. You can find additional information on this ChiefDelphi post and on their GitHub site. Tags: Vision

"Add correct host key in known_hosts" / multiple ssh host keys per hostname? Linux Classes Configuring an Axis Camera | Vision Processing | 2015 FRC Control System Three different Axis camera models are supported by the FRC software, the Axis 206, Axis M1011 and Axis M1013. This document provides instructions on how to configure one of these cameras for FRC use. To follow the instructions in this document, you must have installed the NI 2015 FRC Update Suite and Configured your radio Connect the camera Connect the Axis camera to the DAP-1522 radio using an Ethernet cable. Axis Camera Setup Tool Browse to C:\Program Files (x86)\National Instruments\LabVIEW 2014\project\Axis Camera Tool and double-click on AxisCameraSetup.exe to start the Axis Camera Setup Tool. Tool Overview The camera should be automatically detected and the green indicator light should be lit. Setup the Camera To configure the camera, press Apply. Camera Webpage To set the network settings, open a web browser and enter the address shown next to Camera found at in the tool (in the example above this is 10.0.40.20) in the address bar and press enter. Setup Page Click Save. Click Save.

How to properly remove an old ssh key Guide to dual-booting Dual-booting refers to the concept of installing two operating systems on the same computer, and having the option to choose which one to boot into when the computer is rebooting. Dual-booting is actually a special case of multi-booting, or installing more than one operating on a computer. This is a very common practice in the Linux and BSD communities. If you are coming from the Windows world and want to install a Linux or BSD distribution while maintaining your Windows installation, dual-booting is one means of accomplishing that. When dual-booting, you may choose to install both operating systems on the same hard drive, or on separate hard drives – if your computer has more than one. So here are a few things to keep in mine when you are attempting to set up a dual boot configuration: Dual-booting does not imply installing on the same hard drive. To have articles like this delivered automatically to your Feed Reader or Inbox, subscribe via RSS or email.

2015 FIRST® Robotics Competition RoboRealm is a software application that provides you the ability to rapidly process images from the Kinect and/or Axis IP camera in order to visually detect field elements. You can use RoboRealm to track positional markers, follow lines, track balls, and augment camera images with additional visual graphics. RoboRealm is an ideal vision platform for the Hybrid Autonomous period and human controlled parts of the competition (i.e. Augmented Driving). In the spirit of inspiring young people to be science and technology leaders, RoboRealm is actively supporting the 2015 FIRST® Robotics Competition. As the 2015 season is over you can still download a 30 day trial copy that you can use to experiment with before next season. The following tutorials outline several possible ways to perform automated vision based target tracking and targeting for the 2015 FIRST® Robotics Competition. RoboRealm Computing RoboRealm runs on a Windows PC.

removing outdated ssh fingerprints from known_hosts with sed or … ssh-keygen | Screenage At least from the last issue in Debian-based systems including Ubuntu you might know the pain of getting the message from you ssh client that the server host key has changed as ssh stores the fingerprint of ssh daemons it connects to. Actually this is a neat feature because it helps you detecting man in the middle attacks, dns issues and other things you probably should notice. Until recently I opened the file .ssh/known_hosts in vim, deleted the entry, saved the file and started over again. I randomly checked “man ssh” which gives you a lot of hints about the usage of known_hosts but I just did not find information about how to delete an old fingerprint or even overwrite it. I imagined something like “ssh –update-fingerpring hostname” with an interactive yes/no question you cannot skip. So after hanging around with Mnemonikk discussing this he pointed out a very simple method with “sed” that is really handy and helps you understanding sed more deeply.

Hack Your Life! | Tools for survival…