Secrets and Lies for Your Characters. Nothing is better (or more fun for the writer) than a story-relevant secret or lie. 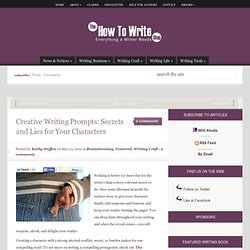 Give some dilemma beneath the surface story to give your character depth, add suspense and tension, and keep your reader turning the pages. You can drop hints throughout your writing and when the reveal comes—you will surprise, shock, and delight your reader. Creating a character with a strong internal conflict, secret, or burden makes for one compelling read! (To see more on writing a compelling protagonist, check out The Compelling Protagonist Part 1 and Compelling Protagonist Part 2.) It’s vital to have conflict in every scene, and when the action is quiet in your book, internal conflict will keep a reader turning the pages. Tips 'N Stuff To Create, Write, & Draw Better Female Action Heroes. No matter what, you can't go wrong with these. 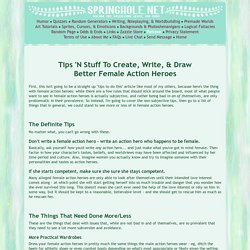 Basically, ask yourself how you'd write any action hero... and just make what you've got in mind female. Then factor in how your character's tastes, beliefs, and worldviews may have been affected and influenced by her time period and culture. Also, imagine women you actually know and try to imagine someone with their personalities and tastes as action heroes. If she starts competent, make sure she sure she stays competent. Basic Tips To Create Better Characters With Tragic & Traumatic Backstories.

First, ask yourself why you’re giving your character a tragic or traumatic backstory. 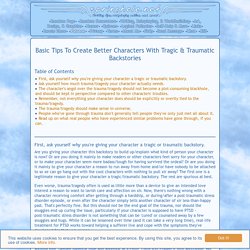 Are you giving your character this backstory to build up/explain what kind of person your character is now? Or are you simply doing it to make readers or other characters feel sorry for your character, or to make your character seem more badass/tough for having survived the ordeal? The first is a legitimate reason to give your character a tragic/traumatic backstory. The second one is spurious at best. Even worse, trauma/tragedy often is used as little more than a device to provide an excuse for the character’s intended love interest to snuggle/comfort xir. Benjamin Linus from Lost is a good example of a tragic/traumatic backstory used to good effect. While the effects of the bad things characters in the Harry Potter series go through are not always made explicitly clear, a look into each and every character will show that everything they have gone through has affected them somehow. 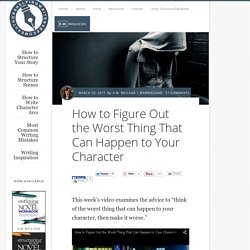 Writers are always being told to think of the worst thing that could happen to their characters—and then to make it worse. Being something of a literalist, the first time I heard that, my original thought was something like, The worst thing? You mean like kill him? With maybe a few interpretative exceptions, death is pretty much the worst thing that can happen to any of us. But if every author took that advice literally, every story would have to end abruptly with the death of its main character. So what did they have in mind? The point of this exercise is not only to up the stakes and create conflict, but more importantly to generate character growth and advance his personal arc in the story. Characters With Conflict & Backstory. Seven Steps To Creating Characters That Write Themselves Creating characters that are believable takes time and discipline. 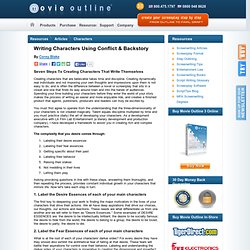 Creating dynamically real individuals and not imposing your own thoughts and impressions upon them is not easy to do, and is often the difference between a novel or screenplay that sits in a closet and one that finds its way around town and into the hands of audiences. Spending your time building your characters before they enter the world of your story makes the process of writing an easier and more enjoyable ride, and creates a finished product that agents, publishers, producers and readers can truly be excited by. You must first agree to operate from the understanding that the three-dimensionality of your characters is not created magically. Talent equals discipline multiplied by time and you must practice (daily) the art of developing your characters.

The complexity that you desire comes through: 1. 2. 3. 4. 5. Emotions are extreme. 6. 7. Find the Essences. The Inner Struggle: Guides for Using Inner Conflict That Make Sense. By Janice Hardy, @Janice_Hardy I sat in on an amazing workshop while I was at RWA that made something typically vague very clear and applicable. 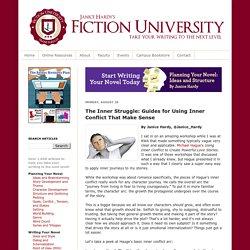 Michael Hague's Using Inner Conflict to Create Powerful Love Stories. It was one of those workshops that discussed what I already knew, but Hague presented it in such a way that I clearly saw a super easy way to apply inner journeys to my stories. While the workshop was about romance specifically, the pieces of Hague’s inner conflict really work for any character journey. He calls the overall arc the “journey from living in fear to living courageously.” Let's take a peek at Hauge's basic inner conflict arc: Longing or Need: The thing the character longs for or needs in the story. If this doesn’t say “inner goal” I don’t know what does. (More on goals here) Wound: A past wound or hurt that is a current unhealed source of pain. The wound might be some deep dark secret, or it can be how the character grew up.