Why China Will Oppose Any Invasion of Syria - Matt Schiavenza. It isn't because Beijing likes chemical weapons or Assad. 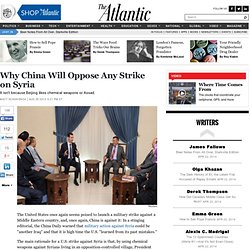 Reuters The United States once again seems poised to launch a military strike against a Middle Eastern country, and, once again, China is against it: In a stinging editorial, the China Daily warned that military action against Syria could be "another Iraq" and that it is high time the U.S. "learned from its past mistakes. " The main rationale for a U.S. strike against Syria is that, by using chemical weapons against Syrians living in an opposition-controlled village, President Bashar al-Assad has violated an international norm and must be punished. In theory, a strike would not only prevent Assad from using these weapons again but also deter embattled governments elsewhere from deploying them.

China, like 188 other countries, is a signatory to the Organization for the Prohibition of Chemical Weapons, and, unlike Russia, has no military relationship with Syria. Carr rules out sending Australian troops to Syria as US, allies gear up for probable military strike. Updated Wed 28 Aug 2013, 4:56pm AEST Foreign Affairs Minister Bob Carr has left open the possibility of an international military response to the Syrian crisis without a mandate from the United Nations. 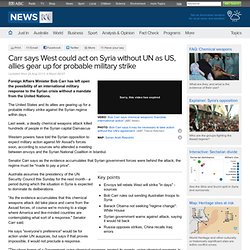 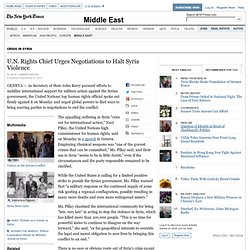 Employing chemical weapons was “one of the gravest crimes that can be committed,” Ms. Pillay said, and their use in Syria “seems to be in little doubt,” even if the circumstances and the party responsible remained to be clarified. While the United States is calling for a limited punitive strike to punish the Syrian government, Ms. Pillay warned that “a military response or the continued supply of arms risk igniting a regional conflagration, possibly resulting in many more deaths and even more widespread misery.” Ms. There is no easy or obvious route out of Syria’s crisis except negotiating immediate steps to end the conflict, she said, and countries, together with the United Nations, had to find a way to make that happen.

Reviewing an array of international rights issues, Ms. CNN: U.N. inspectors tote evidence out of Syria as Obama weighs military action. MSNBC: UN weapons inspectors pull out of Syria ahead of schedule. Syria, allies reportedly working on plan for staged power transition. DAMASCUS, Syria, Sept. 8 (UPI) -- Syria and its allies, Iran and Russia, are working on a proposal for a power transition that would head off a retaliatory U.S. military strike, Haaretz reports. 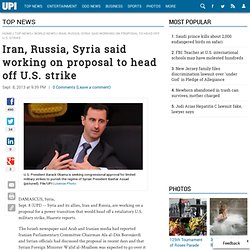 The Israeli newspaper said Arab and Iranian media had reported Iranian Parliamentary Committee Chairman Ala al-Din Boroujerdi and Syrian officials had discussed the proposal in recent days and that Syrian Foreign Minister Walid al-Muallem was expected to go over it with Russian President Vladimir Putin when they meet Monday. CBS News: Bashar Assad tells Charlie Rose U.S. should "expect every action" in response to Syria strikes.

Analysis. Syria conflict: Disputes flare over UN resolution. 11 September 2013Last updated at 01:08 GMT Jeremy Bowen reports from Damascus on reaction to latest developments A Russian plan for Syria's chemical weapons to be put under international control has sparked immediate disputes over resolutions at the United Nations. 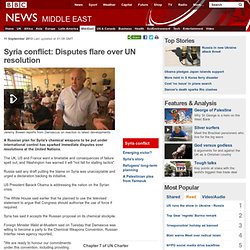 The UK, US and France want a timetable and consequences of failure spelt out, and Washington has warned it will "not fall for stalling tactics". Russia said any draft putting the blame on Syria was unacceptable and urged a declaration backing its initiative. US President Barack Obama is addressing the nation on the Syrian crisis. The White House said earlier that he planned to use the televised statement to argue that Congress should authorise the use of force if required. MSNBC: Syria's foreign minister: We'll declare chemical weapons, sign arms ban. CBS News: Israel dubious of Russia's Syria chemical weapons proposal, but Iran and China back 11th-hour diplomatic push. Why Qatar Is Quietly Supporting a U.S. Strike in Syria - Daveed Gartenstein-Ross and Jonathan Schanzer.

Once a vocal supporter of the Syrian opposition, Doha is now taking a more clandestine track under its new emir. 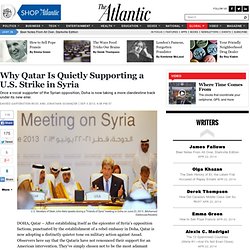 DOHA, Qatar – After establishing itself as the epicenter of Syria’s opposition factions, punctuated by the establishment of a rebel embassy in Doha, Qatar is now adopting a distinctly quieter tone on military action against Assad. Observers here say that the Qataris have not renounced their support for an American intervention. They’ve simply chosen not to be the most adamant Middle East voice calling for war. This apparent change in policy is due, in part, to the rise of Qatar’s new emir, Sheikh Tamim bin Hamad al-Thani. Tamim assumed his new role in late June after his father, Sheikh Hamad, abdicated after 18 years in power. Part of this change in tone stems from the departure of Qatar’s iconic prime minister and foreign minister Hamid Bin Jassim – popularly known as HBJ – whose colorful and outspoken personality was central to the foreign policies of Tamim’s father.

Russia will give UN 'proof' of Syria rebel chemical use. 18 September 2013Last updated at 18:32 GMT Weapons inspectors from the United Nations are set to return to Syria, as Frank Gardner reports Russia will give the Security Council evidence implicating Syrian rebels in a chemical attack on 21 August, Foreign Minister Sergei Lavrov has said. 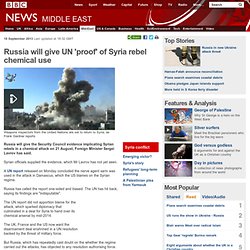 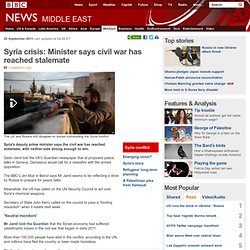 Qadri Jamil told the UK's Guardian newspaper that at proposed peace talks in Geneva, Damascus would call for a ceasefire with the armed opposition. The BBC's Jim Muir in Beirut says Mr Jamil seems to be reflecting a drive by Russia to prepare for peace talks. Meanwhile, the US has called on the UN Security Council to act over Syria's chemical weapons. Secretary of State John Kerry called on the council to pass a "binding resolution" when it meets next week. 'Neutral monitors' Mr Jamil told the Guardian that the Syrian economy had suffered catastrophic losses in the civil war that began in early 2011.

More than 100,000 people have died in the conflict, according to the UN, and millions have fled the country or been made homeless.