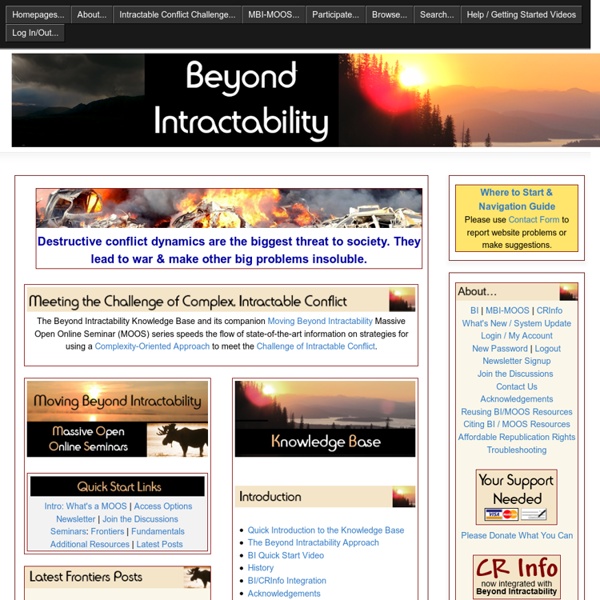 Game theory Game theory is the study of strategic decision making. Specifically, it is "the study of mathematical models of conflict and cooperation between intelligent rational decision-makers."[1] An alternative term suggested "as a more descriptive name for the discipline" is interactive decision theory.[2] Game theory is mainly used in economics, political science, and psychology, as well as logic, computer science, and biology. The subject first addressed zero-sum games, such that one person's gains exactly equal net losses of the other participant or participants. Modern game theory began with the idea regarding the existence of mixed-strategy equilibria in two-person zero-sum games and its proof by John von Neumann. This theory was developed extensively in the 1950s by many scholars. Representation of games[edit] Most cooperative games are presented in the characteristic function form, while the extensive and the normal forms are used to define noncooperative games. Extensive form[edit] [edit]

Deepak Chopra: Why Do Bad Things Happen? (Part 3) In the last post we arrived at a conclusion that will surprise many people: If the good parts of your life are to have meaning, the same must be true of the bad parts. This is a continual message delivered by the world's wisdom traditions. It's a fantasy to believe that being good will keep you from confronting the bad in life, or that there is ever enough pleasure to eradicate pain. The ills that visit every person's life exist for a reason. At a superficial level, you can indulge in a blame game that never ends. Rather, getting beyond blame is a way to actually solve the problem of suffering. There's a harsh judge inside each of us. When bad things happen, all of us refer to our inner compass. 1. When this scheme is embedded in your psyche, your reaction to bad things is predictable because you have so little room to maneuver. 1. We can call this whole scheme moral fundamentalism; it is the most basic view of the universe and our place in it. 1. 1. (To be continued)

How to raise a grateful child You can raise your children to be grateful for what they have. Life won't always gift your child with exactly his heart's desireTeach your child that showing appreciation for gifts is importantCreate excitement surrounding gift purchases for other family members (Parenting.com) -- I was 7 years old when I received a tiny Christmas present -- about the size of an eraser -- awkwardly wrapped and covered in tape. My sister's boyfriend, Jeff, was visiting and had considerately brought gifts for his girlfriend's three younger siblings. Mine, though, was by far the smallest. And I've felt guilty about it ever since. In this, experts say, I wasn't an unusual kid: For distractible, still-developing children (and that's pretty much all of them), gratitude can be hard-won. Parenting.com: Why toddlers throw tantrums So, to Jeff Galvin I offer a long-overdue "Thank you." Your 9-year-old keeps a running -- and growing -- list of toys he has to have. Parenting.com: Boys vs. girls: Who's harder to raise

FPU Center for Peacemaking and Conflict Studies - Links to sites of interest Links to sites of interest These links are provided for your convenience and should not be construed as an endorsement by Fresno Pacific University or the Center for Peacemaking and Conflict Studies of the content or views of the linked materials. Academic Institutions | Religious Organizations | Multilateral SitesGovernment Sites | U.S. External Web Sites Linked to PACS Academic Institutions Religious Organizations Christian Peacemaker TeamsEvery Church a Peace Church. Multilateral Sites Government Sites U.S. Organizations outside the U.S. Circles of Support and Accountability Collaborative Law Restorative Justice Transitional Justice Victimology Informational Sites Commercial Sites If you would like to have your site listed here, email Duane Ruth-Heffelbower.

International Center for Cooperation and Conflict Resolution @ Teachers College :: Mission and Objectives Nash equilibrium In game theory, the Nash equilibrium is a solution concept of a non-cooperative game involving two or more players, in which each player is assumed to know the equilibrium strategies of the other players, and no player has anything to gain by changing only their own strategy.[1] If each player has chosen a strategy and no player can benefit by changing strategies while the other players keep theirs unchanged, then the current set of strategy choices and the corresponding payoffs constitutes a Nash equilibrium. The reality of the Nash equilibrium of a game can be tested using experimental economics method. Stated simply, Amy and Will are in Nash equilibrium if Amy is making the best decision she can, taking into account Will's decision while Will's decision remains unchanged, and Will is making the best decision he can, taking into account Amy's decision while Amy's decision remains unchanged. Applications[edit] History[edit] The Nash equilibrium was named after John Forbes Nash, Jr. Let .

Rod Stryker: The 6-Point Method for Breaking Unhealthy Habits When I first started teaching yoga, it was hard not to notice that students tend to practice in the same spot every time they come to class. The first time they enter the classroom, they carefully consider their options before putting their mat down. Taking in the room, they measure their surroundings to find the best place to practice. Their next class, they usually drop their mat in the exact same spot. Years later, most students are still practicing in the very same spot as the first time they came to class. Habits start innocently enough; rarely does it occur to us that even a harmless habit may be affecting our future. The implication of this is that if you want a different future -- say, to find the love of your life, a more meaningful career, or to have a more fulfilling spiritual life -- it is vital to consider a core teaching of the yoga tradition, which is: Avoid unconscious action or doing things simply because they are familiar. This point is essential.

MeiMei Fox: The Secret to Turning Your Relationship Into a Romance I never was a romantic. That doesn't mean I wasn't sentimental; I cried at the expected moments during chick flicks and even the occasional TV commercial. I enjoyed celebrating anniversaries of first dates and bringing unexpected gifts home to my partner for no reason. Until I met the Love of My Life, Kiran, I was hopelessly pragmatic. "Look," I'd say, assuming a newscaster tone of voice, "There are 7 billion people on this planet. But my worldview got turned upside-down this year. When we did make the decision to give our romance a chance to blossom this past spring, it flourished like Jack's beanstalk. Suddenly, I find that I am no longer "Miss Practicality," as my college friends nicknamed me decades ago. During our short time together as a couple, Kiran and I have navigated our share of scratchy patches. Let's be honest here: Kiran gets most of the credit. While we co-authored this blog, the lessons are Kiran's. 1. Relationships are work. 2. "I like to gush on you," Kiran says. 3.