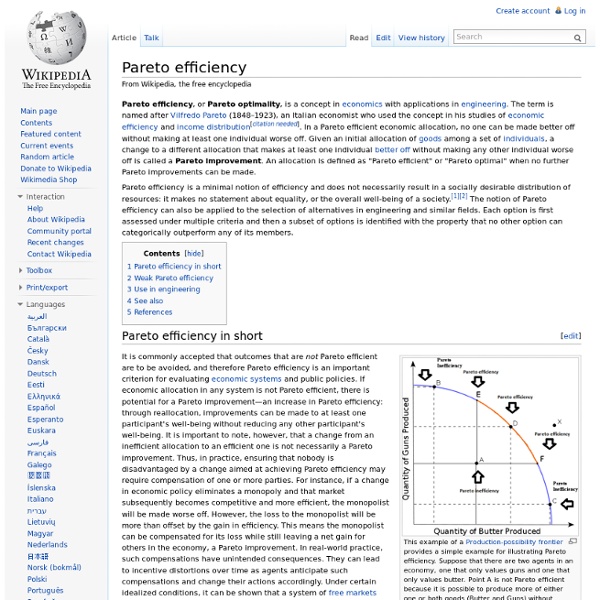 Pareto efficiency, or Pareto optimality, is a state of allocation of resources in which it is impossible to make any one individual better off without making at least one individual worse off. The term is named after Vilfredo Pareto (1848–1923), an Italian economist who used the concept in his studies of economic efficiency and income distribution.[citation needed] The concept has applications in academic fields such as economics and engineering. For example, suppose there are two consumers A & B and only one resource X. Suppose X is equal to 20. Pareto efficiency is a minimal notion of efficiency and does not necessarily result in a socially desirable distribution of resources: it makes no statement about equality, or the overall well-being of a society.[1][2] The notion of Pareto efficiency can also be applied to the selection of alternatives in engineering and similar fields. Pareto efficiency in short[edit] It is commonly accepted[by whom?] Weak Pareto efficiency[edit] for each i and

Pareto distribution The Pareto distribution, named after the Italian civil engineer, economist, and sociologist Vilfredo Pareto, is a power law probability distribution that is used in description of social, scientific, geophysical, actuarial, and many other types of observable phenomena. Definition[edit] If X is a random variable with a Pareto (Type I) distribution,[1] then the probability that X is greater than some number x, i.e. the survival function (also called tail function), is given by where xm is the (necessarily positive) minimum possible value of X, and α is a positive parameter. Properties[edit] Cumulative distribution function[edit] From the definition, the cumulative distribution function of a Pareto random variable with parameters α and xm is When plotted on linear axes, the distribution assumes the familiar J-shaped curve which approaches each of the orthogonal axes asymptotically. Probability density function[edit] It follows (by differentiation) that the probability density function is Suppose

Pareto Optimal | Pareto Efficient | Pareto Improvement | Pareto Tutorial Pareto Efficient and Pareto Optimal Tutorial The main tenant of economics is that resources are scarce. Due to scarcity, that means that not everyone can have some of everything, leading to competition. Pareto Efficiency Named for an Italian economist who specialized in resource and income allocation, Pareto Efficiency goes hand in hand with the Pareto Optimal concept. Through making Pareto Improvements, overall social utility can be increased, by seeking to make allocation decisions that minimize decreased utility for other individuals in the efforts to increase one individual’s utility. What is Pareto Optimality Looking at a standard production possibilities frontier, all points that lie under the curve are inefficient allocations. Pareto Optimality is used heavily in political economics as a means to distribute resources in a more efficient manner to increase overall social utility. ShareThis

Vilfredo Pareto Vilfredo Federico Damaso Pareto (born Wilfried Fritz Pareto; Italian: [vilˈfreːdo paˈreːto]; 15 July 1848 – 19 August 1923) was an Italian engineer, sociologist, economist, political scientist, and philosopher. He made several important contributions to economics, particularly in the study of income distribution and in the analysis of individuals' choices. He was also responsible for popularising the use of the term "elite" in social analysis. He introduced the concept of Pareto efficiency and helped develop the field of microeconomics. His legacy as an economist was profound. Biography[edit] Pareto was born of an exiled noble Genoese family in 1848 in Paris, the centre of the popular revolutions of that year. From Civil engineer to liberal, and then to economist[edit] For some years after graduation, he worked as a civil engineer, first for the state-owned Italian Railway Company and later in private industry. He did not begin serious work in economics until his mid-forties.

What is Pareto Efficiency? Henri Lefebvre Henri Lefebvre (French: [ləfɛvʁ]; 16 June 1901 – 29 June 1991) was a French Marxist philosopher and sociologist, best known for pioneering the critique of everyday life, for introducing the concepts of the right to the city and the production of social space, and for his work on dialectics, alienation, and criticism of Stalinism and structuralism. In his prolific career, Lefebvre wrote more than sixty books and three hundred articles.[1] Biography[edit] In 1961, Lefebvre became professor of sociology at the University of Strasbourg, before joining the faculty at the new university at Nanterre in 1965.[7] He was one of the most respected professors, and he had influenced and analysed the May 1968 students revolt.[8] Lefebvre introduced the concept of the right to the city in his 1968 book Le Droit à la ville[9][10] (the publication of the book predates the May 1968 revolts which took place in many French cities). Lefebvre died in 1991. The critique of everyday life[edit] "Change life!

Sartre and Marxist Existentialism: The Test Case of Collective Responsibility: Thomas R. Flynn: 9780226254661: Amazon.com Marxism Versus Existentialism George Novack’s Understanding History Existentialism and Marxism are the most widely discussed and widely held philosophies of our time. The first is dominant in Western Europe and gaining increasing popularity in the United States. The second is not only the official doctrine of all communist countries but, in one form or another, is accepted as a guide by many movements and parties throughout the world. Over the past 20 years the proponents of these two schools of thought have engaged in continual debate with one another. The centre of this controversy has been France. The development of Sartre has been especially paradoxical. In his latest philosophical treatise, The Critique of Dialectical Reason (1960), the first section of which has been published in English as Search for a Method , he declares that existentialism has become a subordinate branch of Marxism which aspires to renew and enrich it. To what extent, if any, can these philosophies be conjoined?

Western Philosophy Georges Bataille Georges Albert Maurice Victor Bataille (French: [ʒɔʁʒ batɑj]; 10 September 1897 – 9 July 1962) was a French intellectual and literary figure working in literature, anthropology, philosophy, economy, sociology and history of art. Eroticism, sovereignty, and transgression are at the core of his writings. Life and work[edit] Bataille attended the École des Chartes in Paris, graduating in February 1922. Though he is often referred to as an archivist and a librarian because of his employment at the Bibliothèque Nationale, his work there was with the medallion collections (he also published scholarly articles on numismatics). Founder of several journals and literary groups, Bataille is the author of a large and diverse body of work: readings, poems, essays on innumerable subjects (on the mysticism of economy, poetry, philosophy, the arts, eroticism). Fascinated by human sacrifice, he founded a secret society, Acéphale, the symbol of which was a headless man. Key concepts[edit] Other[edit]