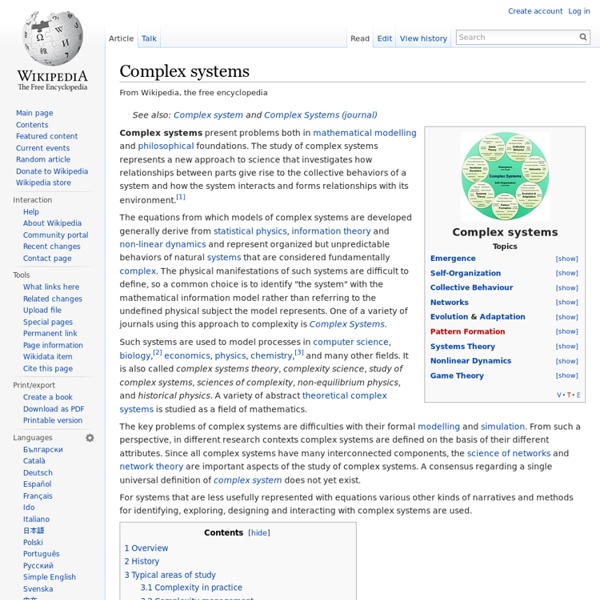 Complex systems present problems both in mathematical modelling and philosophical foundations. The study of complex systems represents a new approach to science that investigates how relationships between parts give rise to the collective behaviors of a system and how the system interacts and forms relationships with its environment.[1] Such systems are used to model processes in computer science, biology,[2] economics, physics, chemistry,[3] and many other fields. The key problems of complex systems are difficulties with their formal modelling and simulation. For systems that are less usefully represented with equations various other kinds of narratives and methods for identifying, exploring, designing and interacting with complex systems are used. Overview[edit] History[edit] A history of complexity science Typical areas of study[edit] Complexity management[edit] Complexity economics[edit] Complexity and modeling[edit] Complexity and chaos theory[edit] 1. Institutes and research centers[edit]

Complex adaptive system They are complex in that they are dynamic networks of interactions, and their relationships are not aggregations of the individual static entities. They are adaptive in that the individual and collective behavior mutate and self-organize corresponding to the change-initiating micro-event or collection of events.[1][2] Overview[edit] The term complex adaptive systems, or complexity science, is often used to describe the loosely organized academic field that has grown up around the study of such systems. The fields of CAS and artificial life are closely related. The study of CAS focuses on complex, emergent and macroscopic properties of the system.[3][11][12] John H. General properties[edit] What distinguishes a CAS from a pure multi-agent system (MAS) is the focus on top-level properties and features like self-similarity, complexity, emergence and self-organization. Characteristics[edit] Some of the most important characteristics of complex systems are:[14] Robert Axelrod & Michael D.

039;s Center for Social Dynamics and Complexity November 5-6, 2010 2010 Computational Social Science Society Conference September 30 - October 2, 2010 IASC North American Regional Meeting CSDC joins the Consortium for Biosocial Complex Systems Together with the Center for Institutional Diversity and the Mathematical, Computational, and Modeling Sciences Center, the CSDC has been brought into the Consortium for Biosocial Complex Systems under the leadership of Sander van der Leeuw. "Integration is the key to being a leader in solving complex challenges," van der Leeuw says. "You must be able to look at problems holistically, and not just at one point in time, but across time. The new Consortium is also a part of the university-wide Complex Adaptive Systems Initiative headed by Sander van der Leeuw and George Poste.

Emergence In philosophy, systems theory, science, and art, emergence is a process whereby larger entities, patterns, and regularities arise through interactions among smaller or simpler entities that themselves do not exhibit such properties. Emergence is central in theories of integrative levels and of complex systems. For instance, the phenomenon life as studied in biology is commonly perceived as an emergent property of interacting molecules as studied in chemistry, whose phenomena reflect interactions among elementary particles, modeled in particle physics, that at such higher mass—via substantial conglomeration—exhibit motion as modeled in gravitational physics. In philosophy, emergence typically refers to emergentism. In philosophy[edit] Main article: Emergentism In philosophy, emergence is often understood to be a claim about the etiology of a system's properties. Definitions[edit] This idea of emergence has been around since at least the time of Aristotle. Strong and weak emergence[edit]

Institute for Complex System Simulations (Home page) Self-organization Self-organization occurs in a variety of physical, chemical, biological, robotic, social and cognitive systems. Common examples include crystallization, the emergence of convection patterns in a liquid heated from below, chemical oscillators, swarming in groups of animals, and the way neural networks learn to recognize complex patterns. Overview[edit] The most robust and unambiguous examples[1] of self-organizing systems are from the physics of non-equilibrium processes. Self-organization is also relevant in chemistry, where it has often been taken as being synonymous with self-assembly. Self-organization usually relies on three basic ingredients:[3] Strong dynamical non-linearity, often though not necessarily involving positive and negative feedbackBalance of exploitation and explorationMultiple interactions Principles of self-organization[edit] History of the idea[edit] Sadi Carnot and Rudolf Clausius discovered the Second Law of Thermodynamics in the 19th century. Developing views[edit]

University of Michigan, Center for the Study of Complex Systems Encyclopedia of Complexity and Systems Science Assembles for the first time the concepts and tools for analyzing complex systems in a wide range of fields Reflects the real world by integrating complexity with the deterministic equations and concepts that define matter, energy, and the four forces identified in nature Benefits a broad audience: undergraduates, researchers and practitioners in mathematics and many related fields Encyclopedia of Complexity and Systems Science provides an authoritative single source for understanding and applying the concepts of complexity theory together with the tools and measures for analyzing complex systems in all fields of science and engineering. The science and tools of complexity and systems science include theories of self-organization, complex systems, synergetics, dynamical systems, turbulence, catastrophes, instabilities, nonlinearity, stochastic processes, chaos, neural networks, cellular automata, adaptive systems, and genetic algorithms. Content Level » Research Show all authors

Cellular automaton The concept was originally discovered in the 1940s by Stanislaw Ulam and John von Neumann while they were contemporaries at Los Alamos National Laboratory. While studied by some throughout the 1950s and 1960s, it was not until the 1970s and Conway's Game of Life, a two-dimensional cellular automaton, that interest in the subject expanded beyond academia. In the 1980s, Stephen Wolfram engaged in a systematic study of one-dimensional cellular automata, or what he calls elementary cellular automata; his research assistant Matthew Cook showed that one of these rules is Turing-complete. Wolfram published A New Kind of Science in 2002, claiming that cellular automata have applications in many fields of science. The primary classifications of cellular automata as outlined by Wolfram are numbered one to four. Overview[edit] The red cells are the von Neumann neighborhood for the blue cell, while the extended neighborhood includes the pink cells as well. A torus, a toroidal shape History[edit]

Agent-based model An agent-based model (ABM) is one of a class of computational models for simulating the actions and interactions of autonomous agents (both individual or collective entities such as organizations or groups) with a view to assessing their effects on the system as a whole. It combines elements of game theory, complex systems, emergence, computational sociology, multi-agent systems, and evolutionary programming. Monte Carlo Methods are used to introduce randomness. Agent-based models are a kind of microscale model [3] that simulate the simultaneous operations and interactions of multiple agents in an attempt to re-create and predict the appearance of complex phenomena. Most agent-based models are composed of: (1) numerous agents specified at various scales (typically referred to as agent-granularity); (2) decision-making heuristics; (3) learning rules or adaptive processes; (4) an interaction topology; and (5) a non-agent environment. History[edit] Early developments[edit] Theory[edit]

Fractal Figure 1a. The Mandelbrot set illustrates self-similarity. As the image is enlarged, the same pattern re-appears so that it is virtually impossible to determine the scale being examined. Figure 1b. The same fractal magnified six times. Figure 1c. Figure 1d. Fractals are distinguished from regular geometric figures by their fractal dimensional scaling. As mathematical equations, fractals are usually nowhere differentiable.[2][5][8] An infinite fractal curve can be conceived of as winding through space differently from an ordinary line, still being a 1-dimensional line yet having a fractal dimension indicating it also resembles a surface.[7]:48[2]:15 There is some disagreement amongst authorities about how the concept of a fractal should be formally defined. Introduction[edit] The word "fractal" often has different connotations for laypeople than mathematicians, where the layperson is more likely to be familiar with fractal art than a mathematical conception. History[edit] Figure 2.

Percolation threshold Percolation threshold is a mathematical term related to percolation theory , which is the formation of long-range connectivity in random systems. Below the threshold a giant connected component does not exist; while above it, there exists a giant component of the order of system size. In engineering and coffee making , percolation represents the flow of fluids through porous media, but in the mathematics and physics worlds it generally refers to simplified lattice models of random systems or networks (graphs), and the nature of the connectivity in them. [ edit ] Percolation models The most common percolation model is to take a regular lattice, like a square lattice, and make it into a random network by randomly "occupying" sites (vertices) or bonds (edges) with a statistically independent probability p . In the systems described so far, it has been assumed that the occupation of a site or bond is completely random—this is the so-called Bernoulli percolation. [ edit ] 2-Uniform Lattices