The significance of plot without conflict - still eating oranges 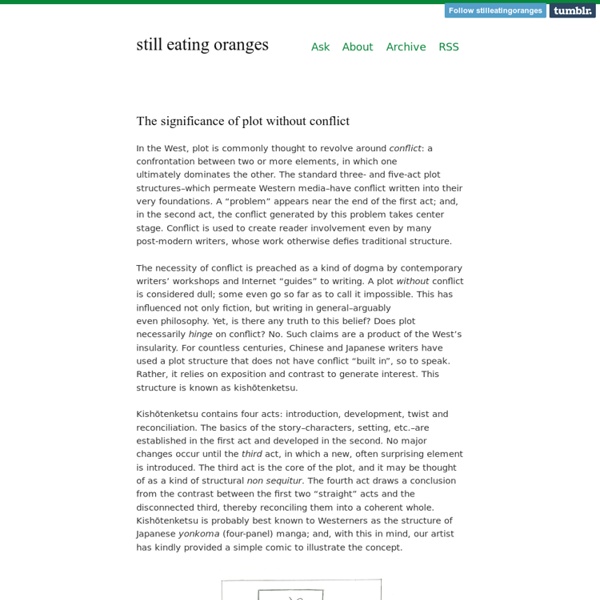 Kishōtenketsu You might have seen this word, Kishōtenketsu, popping up a bit in writing circles. I came upon it a few months ago, and it has been running around my head ever since. Basically, it means a narrative structure where conflict is not driving the plot. You can read more here, and here, and here, but I don't so much want to talk about its definition, as I do the ramifications of Kishōtenketsu in both my writing, and the importance of narratives in society. So if you read any of those links, then you have gotten the basic idea that Kishōtenketsu is a way to structure a narrative very differently to the three acts we are all familiar with. The trick is to realize: it’s three acts all the way down. Each story has three acts. This is what we all know to be the central nervous system of a story, and it works very well. So what's the problem? In my day job I teach media studies to high school kids, and one of the units I love teaching is Media Effect Theory. On page 46 he explains it like this:

The shady origins of five popular board games | Games Blog (Credit: Alex Wong/Getty Images News) Quaker extortionists and Monopoly? The Civil War and The Game of Life? So if you're looking to spark some interesting conversations next time you gather 'round the table for an evening of dice and fake money, here are a few of the lesser known tales of history's biggest board games. Monopoly and the Quakers You may have heard the legend that an unemployed salesman named Charles Darrow invented the game of Monopoly during the depression, somewhere around 1935. A Quaker named Lizzie Magie, in fact, first created the game in 1904 to showcase the evils of property ownership (the original title was "The Landlord's Game".) It was a hit in the Quaker community -- a big one. Once the game took off, Parker Bros. learned its true origins and had to do some damage control. The Hard Life On the surface, Life seems like a pretty happy-go-lucky game. The original game was a lot darker, though. The darker side of Clue Anthony E. Scrabble’s Poe past

Words of inspiration to first-time writers… …from the GITS community. We ran a contest yesterday tied to an upcoming Writers Guild Foundation event, asking people to do this: Write words of encouragement to someone you don’t know about to embark on writing their first complete screenplay. I was so impressed by the responses, I am including all of them here in the order they were posted: We spend our lives searching within ourselves for something majestic, something big enough for people to take notice. Utterly wonderful sentiments here. Thanks to everyone for your comments. Onward and upward!

technique - Twist in kishōtenketsu vs. twist in Western plots - Writers Stack Exchange The difference between kishoutenketsu and Western twists... I hadn't thought about that before. I can think of a few differences, though. Have you ever seen a yonkoma manga? They're four panel comics that normally follow kishoutenketsu structure. Ki: A scene is set. Shou: Elaboration on the scene from the first panel. Ten: Climax, an unforseen event that doesn't have to do with ki and shou directly Ketsu: Resolution, effects of third panel on first two panels. If you flesh out Kishoutenketsu to a TV show or something like that... the difference between a Western twist and the Kishoutenketsu is that Kishotenketsu doesn't have conflicts written into them. I’m thinking, for example, of the way many American police dramas (such as Law & Order) adhere to the following structure: The viewers are introduced to the crime, the detectives, and the initial suspects. This structure works like so: Act 1: Introduce a conflict Act 2: Builds on act 1 Act 3: Twist based on acts 1 and 2 then:

Fighting Domestic Violence With Architecture and Design - Sarah Goodyear What should a domestic violence shelter look like? It’s not something most people think about, or even want to think about. For so long, the whole issue of domestic violence has been pushed out of the public eye. As I learned when working at such a shelter myself in the late 1990s, this kind of housing arrangement can cause more strain on women and families that have already been pushed to extremity. That original configuration of shelter housing has persisted, but it is not necessarily the best model, says Margaret Hobart of the Washington State Coalition Against Domestic Violence (WSCADV). “It grew out of the work we were doing in rethinking shelter rules,” says Hobart. In the traditional communal shelter, she says, women often feel the opposite of empowered, as they have to conform to multiple restrictions on their most basic activities, from how they deal with their children to how they interact with the outside world.

25 Things You Should Know About Worldbuilding Worldbuilding is one of those topics that bakes my noodle every time my brain chooses to dwell on it. I have a whole bucket full of opinions, many of them in stark disagreement with one another. So, this list below should never at any time be taken as “25 Exhaustive Universal Truths About Worldbuilding,” but rather be regarded as, “25 Things Chuck Wendig Thinks About Worldbuilding At This Exact Moment In Time, Oh, Wait, Some Of Them Just Changed.” Kay? Kay. Let’s chat. 1. We’re talking about the revelation of your storyworld and its details through the story itself. 2. My opinion: you build a world to serve the story or stories you want to tell; you do not tell a story that is slave to the worldbuilding. 3. If you prioritize worldbuilding, you’re probably going to end up with like, seven different versions of the D&D Monster Manual but no actual novel. 4. But then again, that’s not to say you’ll find zero value in writing a storyworld bible for the tale at hand. 5. 6. 7. 8. 9. 10. 11.

"The Story of an Hour" Kate Chopin (1894) Knowing that Mrs. Mallard was afflicted with a heart trouble, great care was taken to break to her as gently as possible the news of her husband's death. It was her sister Josephine who told her, in broken sentences; veiled hints that revealed in half concealing. She did not hear the story as many women have heard the same, with a paralyzed inability to accept its significance. There stood, facing the open window, a comfortable, roomy armchair. She could see in the open square before her house the tops of trees that were all aquiver with the new spring life. There were patches of blue sky showing here and there through the clouds that had met and piled one above the other in the west facing her window. She sat with her head thrown back upon the cushion of the chair, quite motionless, except when a sob came up into her throat and shook her, as a child who has cried itself to sleep continues to sob in its dreams. Now her bosom rose and fell tumultuously. "Free! "Go away.

Age and agility in Sun City Sun City, Arizona By Lucy Nicholson During the post Second World War baby boom 76 million Americans were born between 1946 and 1964. The first of them turned 65 in 2011, and as the baby boomers begin to retire, I decided to visit the original American purpose-built retirement community: Sun City, Arizona. An 80-year-old and a 20-year-old were getting married in Sun City. The groom replied: “If she dies, she dies.” Fred Isenberg, 75, broke into a broad grin as he told me the punch-line of this joke during a break in a tango dancing class he was taking with his wife Suzanne, 71. As with all good humor, the joke is loosely inspired by reality. One hundred of the residents of Sun City, Arizona are over the age of 100, more than any other place in the world. Sun City was built in 1959 by entrepreneur Del Webb as America’s first active retirement community, on cotton fields west of Phoenix. I met Dario Rossini, a slim 90-year-old former air force pilot, doing sit-ups in the gym one evening.

9 Tips for Giving Better Editorial Feedback On Narrative Structure: Kishōtenketsu and Obokuri-Eeumi | Serpent Scribbles I've never been fond of the popularly taught three act structure (setup -> conflict -> resolution). It's just never really suited the kind of stories I want to tell. It's too straightforward, too "neat" in many ways. Although I appreciate a tight, cleverly plotted tale as much as anyone, my personal writing style seems to be messier, more open-ended. I don't like the classical five act structure much either (exposition -> rising action -> climax -> falling action -> resolution), though that is a bit of an improvement. It's simply not the way I organize my narratives. In fact, most of my writing tends to fall naturally into a four part structure. Which I thought weird for the longest time, as in Western narratives, three act/five act structures have been pretty predominant. But even the work I don't deliberately or consciously try to structure tends to fall into four parts. Or, to briefly sum up: 起 literally means "to rise" or "to start." 合 (結) is "to unite/connect/join".

5 Petty Feuds That Shaped the Modern World #2. Robert Kennedy and Lyndon Johnson Cause the Nixon Presidency Via Washingtonpost.com If the nation ever needed a strong leader, it was after John F. Kennedy was assassinated in 1963. LBJ technically drew first blood by being a vocal critic of Robert and John's father, Joe, though to be fair, lots of people were critical of Joe Kennedy, a dirty politician who'd been strongly and loudly in the "everyone's secret communists" side of McCarthyism. Via Nybooks.comKennedy, seen here picturing himself in a threesome with Johnson's wife and mother. Things got openly hostile between Johnson and the Kennedys once again when Johnson and JFK squared off for the Democratic nomination that would eventually land Kennedy in the White House. According to friends and aides, JFK's assassination transformed Robert into a completely different, more soft spoken and circumspect person, which appears to have been true in every category other than the stiffness of his hate boner for Johnson. Getty"Mom! #1.