How I built an electricity producing Solar Panel 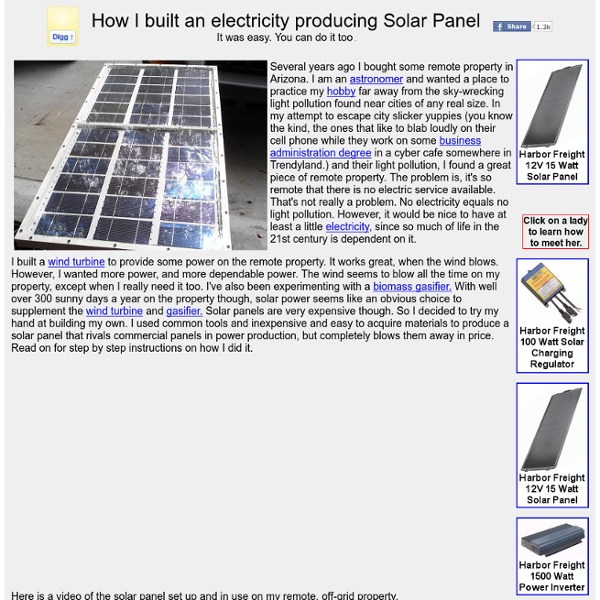 Several years ago I bought some remote property in Arizona. I am an astronomer and wanted a place to practice my hobby far away from the sky-wrecking light pollution found near cities of any real size. In my attempt to escape city slicker yuppies (you know the kind, the ones that like to blab loudly on their cell phone while they work on some business administration degree in a cyber cafe somewhere in Trendyland.) and their light pollution, I found a great piece of remote property. The problem is, it's so remote that there is no electric service available. That's not really a problem. No electricity equals no light pollution. I built a wind turbine to provide some power on the remote property. Here is a video of the solar panel set up and in use on my remote, off-grid property. Let me state up front that I probably won't be able to help you out much if you decide to build your own solar panel(s). So what is a solar panel anyway? After a while, I came to some conclusions: seller. Oops!

DIY Solar Panels Mike Davis is an astronomer. To practice his hobby away from the light pollution of cities, he bought some land in a remote part of Arizona. But there was a problem: No electricity. But he's a resourceful fellow. Our Simple DIY Home Solar Power System Bringing some of the benefits of electrical power to our off-grid home has been a hit-or-miss affair. Over the years we’ve tried some very simple approaches to lighting and small battery recharging for our flashlights, such as hauling a 12 volt car battery to a small rural school about a half mile away every time it needed to be topped up. This was time consuming and inefficient.

Homemade Solar panels At the end, the solar absorber is painted black and placed in the diy solar panels casing. The casing is covered with plexiglass that we attach to the frame and thoroughly corked with silicone. Polycarbonate / plexiglass is slightly convex in order to gain greater strength. You can see installed solar absorber without plexiglass in picture 18. Complete solar collector is shown on Picture 19, and finally, installed solar system can be seen in Picture 20. The following page shows complete specification of parts and material needed for building diy solar panels.

100 Mostly Small But Expressive Interjections David Bier Thanks for this – what a fun post considering there’s no actual narrative in it! Cecily Some of these interjections are quite culturally and age specific, so if people need to be told what they mean, they should probably not be using them.For example, to many Brits, va-va-voom is not old-fashioned at all, but instead is firmly linked to the long-running ads that footballer Thierry Henry made for the Renault Clio. Himanshu Chanda Whoa ! What a biiiig list. Welcome to The Sietch - Projects Build Your Own Solar Thermal Panel After our first attempt at a home built proof of concept solar thermal panel, we were a bit disappointed with the results. It took about 4 hours before the thing started work, and was a bit costly (at over 50 dollars) to make. I knew it could be done better and cheaper.

Build Your Own Solar Battery Charger First we need an old window, I got mine from a construction site. Its your basic old nasty basement window. Make sure you wash both sides of the glass well with soap and water and window cleaner, more dust means less light gets through to your solar cells. Next take your multi-meter and sit in a sunny spot (or under a flood lamp) and check all your cells to make sure they get about .5 volts per cell. You do this by gently (cells are REALLY fragile) putting the red on the front (make sure its on the little metal lines) and black on the back (any place) of each cell while it is in the sun. It should say about .5 volts.

9 Steps To Starting A Survival Garden In a time of economic uncertainty and rising food prices, it it always a good idea to have a garden to provide extra food for you and your family. Besides providing a source of food in an emergency, a garden is also a great source of wonderful vegetables which are MUCH healthier to eat than most of the food you can get at the supermarket. So how do you begin? The following are 9 steps that you can take to get your garden started..... #1) Decide What Your Goals Are - Do you want to grow enough just to add a few vegetables to your dinner once in a while? Do you want it to be able to provide enough food for your family if there is a major emergency?

About - Emily Cummins When I was four, my Grandad gave me a hammer and began to teach me how to make toys from scraps of materials found in his garden shed. I loved the fact that we could make something out of seemingly random bits, and my interest in sustainable design was born. As I got older I learnt about the properties of different materials and became more experienced in using a range of tools. Now I'm 27 and my latest innovation is a sustainable fridge which is 'powered' by dirty water but keeps medicines or small food items clean, dry and cool. The Goodman Chronicle: Ten Documentaries about Truth, Reality, Corruption, Liberty, Power, and More Agenda 21 Explained, by John Anthony (added 03/03/13) I talk a lot about United Nations Agenda 21 in my writings, and have connected it, in different ways, to things occurring in the state of Connecticut, but not many people know of Agenda 21. This presentation is for people who are looking to further their research into the plan to control every resource on the planet, including humans, known as United Nations Agenda 21. This video is only about 90 minutes long, but it took me many more hours to watch it, as I was pausing the video, and researching the things John Anthony was speaking on.

Make A Cheap & Easy Solar USB Charger With An Altoids Tin Photos by Joshua Zimmerman The craftster behind the very popular $3 solar-powered emergency radio is back with a new awesome project: a cheap solar battery charger with a USB plug. Zimmerman wrote, saying that he saw a lot of small solar powered chargers being talked about over Earth Day, but there was a big problem: "They're all quite nice, but also quite expensive. Solar power cheaper than coal as prices keep falling Solar power is now cheaper than coal in some parts of the world. In less than a decade, it’s likely to be the lowest-cost option almost everywhere. In 2016, countries from Chile to the United Arab Emirates broke records with deals to generate electricity from sunshine for less than 3 cents a kilowatt-hour, half the average global cost of coal power. Now, Saudi Arabia, Jordan and Mexico are planning auctions and tenders for this year, aiming to drop prices even further.

Survival Gardening Survival gardening can provide fresh food for you and your family in the aftermath of a disaster. Disasters can occur at anytime and anywhere, and take many forms. Not all disasters are dramatic and natural. For some people a severe economic downturn can be a disaster. Having garden seeds on hand before a disaster strikes is like having homeowners or rental insurance. You hope you will never need it but should the need arise you will be thankful that you have it. Failure To Protect introduction | the taking of logan marr | a national dialoguecaseworker files | child policy | producer chatjoin the discussion | interview with the producersreadings, links & resources | tapes & transcripts | press reactioncredits | privacy policy | FRONTLINE home | wgbh | pbsi web site copyright 1995-2014 WGBH educational foundation. In January 2001, five-year-old Logan Marr was found dead in the basement of her foster mother's home in Chelsea, Maine. The foster mother, Sally Schofield, was a highly respected former caseworker for Maine's Department of Human Services. FRONTLINE examines the girl's short, troubled life and asks a series of tough questions: Why was a little girl who had never been abused taken from her birth mother?