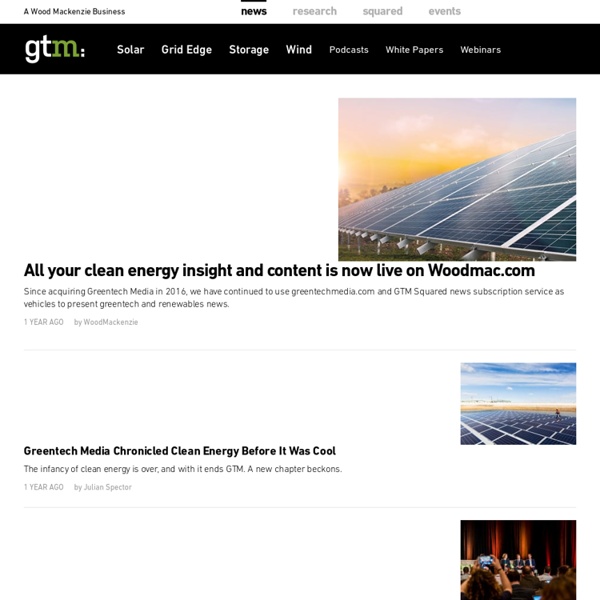 Installing a Solar Energy System Like many of you reading this article, I am fairly new to the realization that our future may not turn out the way we originally planned. A little over two years ago, after the financial turmoil set in, I began to wake up from my comfortable, relatively uncomplicated life and take a closer look at what was going on around me. I was first introduced to the Crash Course by an attendee at the 2009 CPAC Liberty Forum in Washington, DC where I had gone to hear Ron Paul speak. The Emerging Climate Technology Consensus Update (Jul 16, 2010): Expanding on a Washington Post op-ed, Vinod Khosla delineates his argument "about the deficiencies of an isolated cap-and-trade or carbon-pricing bill," and joins the climate technology consensus. Khosla writes, "If we want to make a significant difference, we need to get on the path to reducing carbon worldwide by 80 percent now by focusing on what I call "carbon reduction capacity building" -- in other words, we need to develop radical carbon-reduction technologies. A utility cap (or a carbon price) won't build capacity -- it will just increase our utility costs and decrease our manufacturing competitiveness without any increase in our technological competitiveness. Update (Jul 14, 2010): Other observers have reached similar conclusions about the faltering pollution paradigm.

Solar energy giants discovering Ontario A coming green-energy law and the promise of long-term incentives for producers of renewable power have put Ontario on the radar of some big-name solar companies looking for certainty in a volatile marketplace. This month alone, Tempe, Ariz.-based First Solar Inc., one of the world's leading suppliers of next-generation solar modules, and solar power supplier Recurrent Energy Inc. of San Francisco have acquired and plan to develop multi-megawatt solar projects in Ontario. Meanwhile, San Jose, Calif. Update! 15 PowerPoint Slides That Shook the Earth : Greentech Media If you attend enough cleantech events or are pitched by enough startups, you start to see the same few PowerPoint slides over and over again. Here is a collection of the best or at least the most notorious and historically significant slides in our industry. This collection has been one of our most popular pieces and I'm taking the opportunity to update some of the charts and add some additional commentary.

MIT Researchers are Printing Solar Cells on Sheets of Paper  Published on August 20, 2011 by admin · No Comments Geek.com Solar power is a great alternative energy source, but it’s unfortunately a rather expensive one. Solar Power To Be Sold For Less Than Coal Clean Power Published on February 3rd, 2013 | by Nicholas Brown Update: Some sentences and links have been added to this post to provide better context and comparison. Update #2: I’ve published two articles on energy subsidies in response to comments on this post regarding that matter. Tesla Technology: 5 Bladeless Turbines About To Revolutionize Energy Production Tesla Technology: 5 Bladeless Turbines About To Revolutionize Energy Production www.endalldisease.com “Every home in America can run on wind energy.

How I built an electricity producing wind turbine Several years ago I bought some remote property in Arizona. I am an astronomer and wanted a place to practice my hobby far away from the sky-wrecking light pollution found near cities of any real size. I found a great piece of property. The problem is, it's so remote that there is no electric service available. That's not really a problem. Hydropower from Reuse Reused: a small stepper motor as found in a printer 2 discarded CD-ROMs a foam tray some long stick (I used a piece of 20mm diameter PVC tube from demolition) a LED one or two tie-wraps a small piece of scrap paper Non-reused: The only non-reused part is the hot melt glue (I recommend the low temp type, especially when working with kids). Tools: scissors, screwdriver to disassemble the printer (not shown), cutting pliers or desoldering tools for (optional, not shown). With a bit of luck the LED can also be found in the discarded printer. With even more luck you can find some discarded electronics with a LED standing tall on a printed circuit board, with most of its legs still intact, instead of mounted flush on the board. This makes it easier to remove from the print (leave the legs as long as possible) and easier to connect to the stepper motor by simply inserting it in the plug.

Solar panels could destroy U.S. utilities, according to U.S. utilities Solar power and other distributed renewable energy technologies could lay waste to U.S. power utilities and burn the utility business model, which has remained virtually unchanged for a century, to the ground. That is not wild-eyed hippie talk. It is the assessment of the utilities themselves. Back in January, the Edison Electric Institute — the (typically stodgy and backward-looking) trade group of U.S. investor-owned utilities — released a report [PDF] that, as far as I can tell, went almost entirely without notice in the press. That’s a shame.

Could New York run on renewable energy alone? Three times now, Mark Jacobson has gone out on the same limb. In 2009 he and co-author Mark Delucchi published a cover story in Scientific American that showed how the entire world could get all of its energy — fuel as well as electricity — from wind, water and solar sources by 2030. No coal or oil, no nuclear or natural gas. The tale sounded infeasible — except that Jacobson, from Stanford University, and Delucchi, from the University of California, Davis, calculated just how many hydroelectric dams, wave-energy systems, wind turbines, solar power plants and rooftop photovoltaic installations the world would need to run itself completely on renewable energy.The article sparked a spirited debate on our web site, and it also sparked a larger debate between forward-looking energy planners and those who would rather preserve the status quo. The duo went on to publish a detailed study in the journal Energy Policy that also called out numbers for a U.S. strategy.

Artificial Photosynthesis System as efficient as plants and can reduce CO2 levels A group at Panasonic has developed the Artificial Photosynthesis System, which produces organic materials with a world-leading efficiency in terms of solar energy conversion. The recently achieved efficiency, 0.2%, is on a par with that for real plants used in biomass energy. Artificial photosynthesis is a technology that uses sunlight to produce oxygen and organic substances from water and carbon dioxide, like plants do. As an ideal technology that could solve both global warming and energy issues, artificial photosynthesis is currently being researched worldwide. What if we never run out of oil? As the great research ship Chikyu left Shimizu in January to mine the explosive ice beneath the Philippine Sea, chances are good that not one of the scientists aboard realized they might be closing the door on Winston Churchill’s world. Their lack of knowledge is unsurprising; beyond the ranks of petroleum-industry historians, Churchill’s outsize role in the history of energy is insufficiently appreciated. Winston Leonard Spencer Churchill was appointed First Lord of the Admiralty in 1911. With characteristic vigor and verve, he set about modernizing the Royal Navy, jewel of the empire. The revamped fleet, he proclaimed, should be fueled with oil, rather than coal — a decision that continues to reverberate in the present. Burning a pound of fuel oil produces about twice as much energy as burning a pound of coal.