“Green Nukes” An Important Climate Change Mitigation Tool. Adam Curry interviewed Curt Stager, the author of Deep Future: The Next 100 Years of Life on Earth for his Big Book Show. 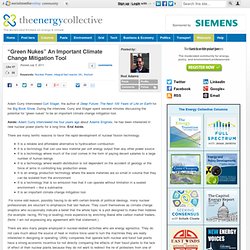 During the interview, Curry and Stager spent several minutes discussing the potential for “green nukes” to be an important climate change mitigation tool. Aside: Adam Curry interviewed me four years ago about Adams Engines; he has been interested in new nuclear power plants for a long time. End Aside. There are many terrific reasons to favor the rapid development of nuclear fission technology. Energy Research for Sustainable Development. In my past article on the importance of energy information, I mentioned that an efficient knowledge dissemination system would help consumers make informed and wise choices regarding energy consumption. 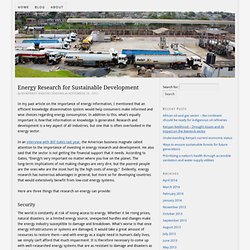 In addition to this, what’s equally important is how that information or knowledge is generated. Research and development is a key aspect of all industries, but one that is often overlooked in the energy sector. In an interview with Bill Gates last year, the American business magnate called attention to the importance of investing in energy research and development. He also said that the sector is not getting the financial support that it needs. Cost of fuel is major expense for U.S. military. Newport, R.I. - When Adm. 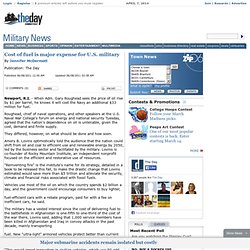 Gary Roughead sees the price of oil rise by $1 per barrel, he knows it will cost the Navy an additional $33 million for fuel. Roughead, chief of naval operations, and other speakers at the U.S. Naval War College's forum on energy and national security Tuesday, agreed that the nation's dependence on oil is untenable, given the cost, demand and finite supply. They differed, however, on what should be done and how soon. Amory B. "Reinventing fire" is the institute's name for its strategy, detailed in a book to be released this fall, to make the drastic change that Lovins estimated would save more than $5 trillion and alleviate the security, climate and financial risks associated with fossil fuels.

Vehicles use most of the oil on which the country spends $2 billion a day, and the government could encourage consumers to buy lighter, Ways on how African industries can save energy. Worldwide energy prices have indeed increased dramatically. 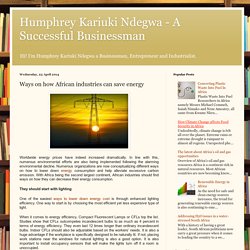 In line with this, numerous environmental efforts are also being implemented following the alarming environmental decline. Numerous organizations are now conceptualizing different ways on how to lower down energy consumption and help alleviate excessive carbon emission. A day to move beyond fossil fuels. A Plan to Power 100 Percent of the Planet with Renewables. In December leaders from around the world will meet in Copenhagen to try to agree on cutting back greenhouse gas emissions for decades to come. 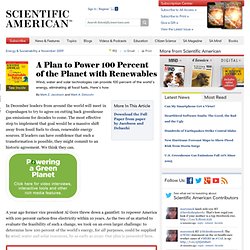 The most effective step to implement that goal would be a massive shift away from fossil fuels to clean, renewable energy sources. If leaders can have confidence that such a transformation is possible, they might commit to an historic agreement. We think they can. A year ago former vice president Al Gore threw down a gauntlet: to repower America with 100 percent carbon-free electricity within 10 years. As the two of us started to evaluate the feasibility of such a change, we took on an even larger challenge: to determine how 100 percent of the world’s energy, for all purposes, could be supplied by wind, water and solar resources, by as early as 2030. Select an option below: Customer Sign In *You must have purchased this issue or have a qualifying subscription to access this content. Unknown Mathematician Proves Surprising Propert... LMBC - Liquid Metal Battery Corporation. 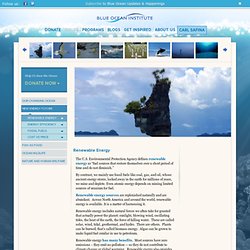 Reinventing Fire. Digging up and burning the deposits of ancient sunlight stored eons ago in primeval swamps has transformed human existence and made industrial and urban civilization possible. 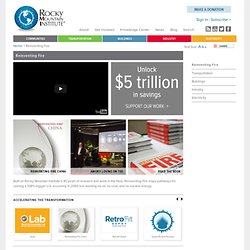 However, those roughly four cubic miles of fossil fuels every year are no longer the only, best, or even cheapest way to sustain and expand the global economy—whether or not we count fossil fuels’ hidden costs. Those “external” costs, paid not at the fuel pump or electric meter but in our taxes, wealth, and health, are not counted in the Reinventing Fire analysis, but are disturbingly large. Tens of billions of taxpayer dollars each year subsidize America’s fossil fuels, and even more flow to the systems that burn those fuels, distorting market choices by making the fuels look far cheaper than they really are. But the biggest hidden costs are economic and military. Future of Clean Energy.