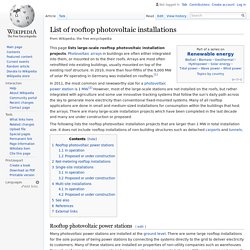 Photovoltaic arrays in buildings are often either integrated into them, or mounted on to the their roofs. Arrays are most often retrofitted into existing buildings, usually mounted on top of the existing roof structure. In 2010, more than four-fifths of the 9,000 MW of solar PV operating in Germany was installed on rooftops.[1] In 2011, the most common and newsworthy size for a photovoltaic power station is 1 MW.[2] However, most of the large-scale stations are not installed on the roofs, but rather integrated with agriculture and some use innovative tracking systems that follow the sun's daily path across the sky to generate more electricity than conventional fixed-mounted systems.

Many of all rooftop applications are done in small and medium-sized installations for consumption within the buildings that host the arrays. Rooftop photovoltaic power stations[edit] In operation[edit] Proposed or under construction[edit] How many solar panels do I need? I hate this answer but I am going to give it anyway: It depends. 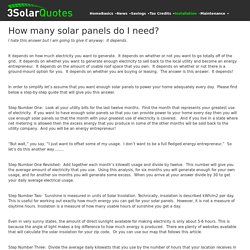 Step Number One: Look at your utility bills for the last twelve months. “But wait,” you say, “I just want to offset some of my usage. Step Number One Revisited: Add together each month’s kilowatt usage and divide by twelve. Step Number Two: Sunshine is measured in units of Solar Insolation. Even in very sunny states, the amount of direct sunlight available for making electricity is only about 5-6 hours. Are you ready for solar now? How many solar panels do I need?

Average household electricity use around the world. Do you know how much electricity your home uses each year? 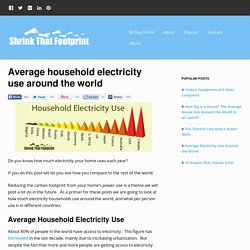 If you do this post will let you see how you compare to the rest of the world. Reducing the carbon footprint from your home’s power use is a theme we will post a lot on in the future. As a primer for these posts we are going to look at how much electricity households use around the world, and what per person use is in different countries. Average Household Electricity Use About 80% of people in the world have access to electricity. Using data from the World Energy Council we can compare how much electricity the average electrified household uses in different countries. Across the countries we chose to compare household electricity use varies enormously. In the US typical household power consumption is about 11,700 kWh each year, in France it is 6,400 kWh, in the UK it is 4,600 kWh and in China around 1,300 kWh.

In China about 99% of people have electricity and average household size is around 3. The Chart That Shows Why the Solar-Powered Future Has Arrived. More than one record was broken in June. 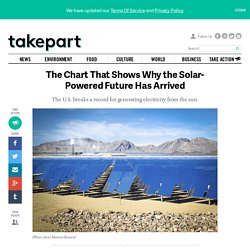 Scarily, it was the hottest month on record as global temperatures continue to rise thanks to climate change. More happily, United States solar power plants in June smashed the record for generating carbon-free electricity from the sun, another sign that renewable energy is increasingly becoming competitive with fossil fuels. (Photo: U.S. Energy Information Administration) So-called utility-scale solar power plants—those with a capacity of 1 megawatt or more—produced 2,765 gigawatt-hours of electricity in June, according to a new report from the U.S. That’s nearly 36 percent more power than was generated in June 2014.

The news comes on the heels of a report from the International Energy Agency that found that renewable energy is starting to rival coal and other fossil fuels. RELATED: Germany Breaks a Renewable Energy Record.