BuildItSolar: Solar energy projects for Do It Yourselfers to save money and reduce pollution 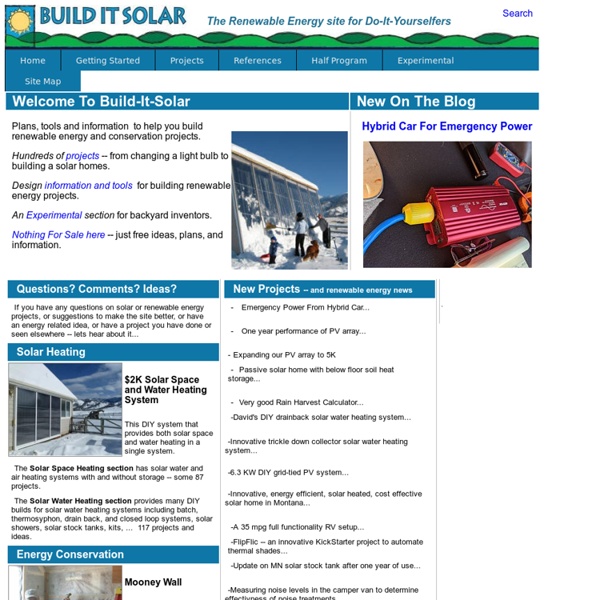 Strathcona Beekeepers: The Sun Hive Hive Monitoring: Measuring Primary and Secondary Pests of Your Hive I have always used a sticky board under my screened bottom for mite testing but recently learned that this may not always be a good indication of hive mite population. If your bees are not good groomers or non hygienic you may have a high number of mites that don't show up on your A great BBC series that follows Martha Kearney's beekeeping adventures in England. Welcome to The Sietch - Projects Build Your Own Solar Battery Charger First we need an old window, I got mine from a construction site. Its your basic old nasty basement window. Make sure you wash both sides of the glass well with soap and water and window cleaner, more dust means less light gets through to your solar cells.

Scientists Develop Affordable Solar Panels That Work In The Dark It's about damn time, don't you think? Scientists at Lawrence Berkeley National Laboratory announced Wednesday that they have been able to confirm a new high-efficiency solar cell design that utilizes nearly the entire solar spectrum. Translation: They figured out a way to make solar panels generate electricity in the dark. CleanTechnica says , In earlier trials, the researchers used different alloys that achieved full spectrum responses but involved very high production costs.

Small Spaces Good Design For Living in Small ApartmentsAs people migrate to smaller spaces, good design helps a lot. This is something they figured out in Europe long ago, that if you don't have a lot of horizontal room you can go vertical. Tumidei in Italy makes some of the nicest stuff, like this unit with lots of storage under the bed. This unit just raises the floor high enough for beds to slide under. This one looks a bit clinical, but has two single beds plus a pull-out double bed in between. Straw bale Straw has been used as a building material for centuries for thatch roofing and also mixed with earth in cob and wattle and daub walls. Straw bales were first used for building over a century ago by settlers in Nebraska, USA, shortly after the invention of baling machines. Straw is derived from grasses and is regarded as a renewable building material since its primary energy input is solar and it can be grown and harvested. Straw bales were first used for building over a century ago. Straw is the springy tubular stalk of grasses like wheat and rice that are high in tensile strength. It is not hay, which is used for feeding livestock and includes the grain head.

How to Make Inexpensive DIY Home-Built Solar Panels with Damaged Solar Cells from Ebay Mike Davis is an astronomer. To practice his hobby away from the light pollution of cities, he bought some land in a remote part of Arizona. But there was a problem: No electricity. Geothermal Installation by the Numbers in Pennsylvania A lot of friends and neighbors ask why we switched to geothermal; here is the answer to that question by the numbers. All numbers used are verified averages, they are not estimates. In August of 2009 we installed a 5 ton geothermal heating and cooling system to replace our propane furnace and central air conditioner. The chart to the left shows the system cost. Don't let the initial cost scare you away - the signficantly lower cost of operation will make up for it. $3,000 - $4,000 per year to Heat with Propane

ECO-FRIENDLY DIY BUILDING THAT DOESN’T COST THE EARTH Building your own home need not cost your life savings. There are plenty of simple, DIY alternatives for those who want to do it on the cheap and in an environmentally friendly way. Here are just a few ideas. You’ll be amazed at what you can do with a bit of time, elbow grease and a great idea! Solar Thermal Technology for solar hot water, solar building hea Solar thermal is a technology designed to harness sunlight for its thermal energy (heat). This heat is often used for heating water used in homes, businesses, swimming pools, and for heating the insides of buildings (space heating). In order to heat water using sunlight, a solar thermal collector heats a fluid that is pumped through it.

Our 13 Best Recipes For Pomegranates Pomegranates have been savored in the Middle East for centuries , and today they're finally getting their due in the West. It's no wonder the secret's out: the ruby-colored fruits have a distinctly tart flavor that pops in both sweet and savory dishes. (Plus, they're good for you, brimming with healthy antioxidants , vitamins, potassium, folic acid and even iron.) De-seeding a pomegranate takes some time and skill, but the effort is worth it. Once you've got your pomegranate seeds (or arils, as they're technically known) -- or just buy the seeds in packets -- you can make any of the recipes from around the web in the slideshow below.

Luxury Villa Amanzi, Thailand by Original Vision Studio Luxury Villa Amanzi, Thailand by Original Vision Studio The Villa Amanzi by Architect firm Original Vision Studio is a stunning modern vacation residence located in the exclusive Cape Sol on the West coast of Phuket, Thailand. Villa Amanzi is a stunning six bedroom residence with a 15m infinity pool and breathtaking views over the Andaman Sea. This luxury villa enjoys a spectacular headland location along Kamala’s exclusive Millionaires Mile and captures cool gentle breezes all year round with uninterrupted sea views from every vantage point, in one of the most breathtaking locations Phuket has to offer. The contemporary design features ultra modern architecture and interiors that combine to provide guests with the optimal environment to relax and unwind in unspoilt luxury.

How to make your own marshmallows S'mores are more commonly associated with campfires than campy holidays, but there's something about the smell of frosty nights and bonfires in the air around Halloween that has me thinking about one of my favorite childhood treats: a hot toasted marshmallow smooshed between two graham crackers with as much chocolate as possible (parents and activity leaders were notoriously skimpy with the chocolate in my experience). Of course, now that I'm older, I'm not a fan of all the genetically modified sugar, high-fructose corn syrup, and other food additives I can’t begin to pronounce that are in, and smooshed between, those two graham crackers. So I decided to see if I could whip up the makings of some tasty whole-food s'mores, and as it turns out, homemade marshmallows and graham crackers are surprisingly easy to make. Homemade marshmallows