International Decade for Action 'Water for Life' 2005-2015. Top cause of dirty drinking water? People defecating in public. GENEVA – One billion people worldwide still practice “open defecation” and they need to be told that this leads to the spread of fatal diseases, U.N. experts said on Thursday at the launch of a study on drinking water and sanitation. 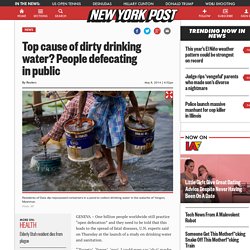 “‘Excreta’, ‘faeces’, ‘poo’, I could even say ‘sh-t’ maybe, this is the root cause of so many diseases,” said Bruce Gordon, acting coordinator for sanitation and health at the World Health Organization. Societies that practice open defecation – putting them at risk from cholera, diarrhea, dysentery, hepatitis A and typhoid – tend to have large income disparities and the world’s highest numbers of deaths of children under 5 years old.

Attempts to improve sanitation among the poorest have long focused on building latrines, but the United Nations says that money literally went down the toilet. Attitudes, not infrastructure, need to change, it said. “There are so many latrines that have been abandoned, or were not used, or got used as storage sheds. India No.1. How Does Water Pollution Affect Humans? - The World Counts. TheWorldCounts, 15 April, 2014 Is Your Water Clean? 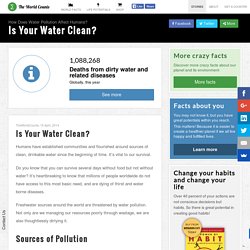 Humans have established communities and flourished around sources of clean, drinkable water since the beginning of time. It’s vital to our survival. Do you know that you can survive several days without food but not without water? It’s heartbreaking to know that millions of people worldwide do not have access to this most basic need, and are dying of thirst and water borne diseases. Freshwater sources around the world are threatened by water pollution. Sources of Pollution The main sources of water pollution are the following: Discharge of untreated Raw Sewage from households and factoriesChemicals dumped from FactoriesAgricultural run-offs that make their way into our rivers and streams and groundwater sourcesUrbanizationThe rising use of synthetic organic substancesOil SpillsAcid Rain caused by the burning of Fossil FuelsHuman littering in rivers, oceans, lakes and other bodies of water.

The Problems and Solutions to Safe Water in Africa. It is a desperately worrying statistic that nearly one billion people in the world lack clean, healthy drinking water. 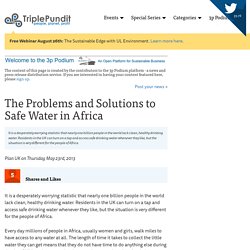 Residents in the UK can turn on a tap and access safe drinking water whenever they like, but the situation is very different for the people of Africa. Every day millions of people in Africa, usually women and girls, walk miles to have access to any water at all. The length of time it takes to collect the little water they can get means that they do not have time to do anything else during the day. Children do not get the chance to have an education simply because they are too busy collecting water. Health and Water in Africa. Poverty and Water in Africa. Poverty and Water are Related Read more about...Health Hunger Poverty Education There are a number of reasons why poverty has become an epidemic in Africa. 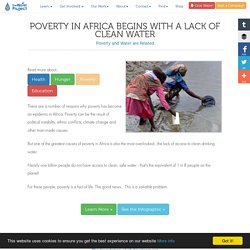 Poverty can be the result of political instability, ethnic conflicts, climate change and other man-made causes. Facts: Water. 2013 - United Nations International Year of Water Cooperation: Facts and Figures. Dirty water kills 5,000 children a day. Nearly two million children a year die for want of clean water and proper sanitation while the world's poor often pay more for their water than people in Britain or the US, according to a major new report. The United Nations Development Programme, in its annual Human Development report, argues that 1.1 billion people do not have safe water and 2.6 billion suffer from inadequate sewerage. This is not because of water scarcity but poverty, inequality and government failure. The report urges governments to guarantee that each person has at least 20 litres of clean water a day, regardless of wealth, location, gender or ethnicity. If water was free to the poor, it adds, it could trigger the next leap forward in human development. Many sub-Saharan Africans get less than 20 litres of water a day and two-thirds have no proper toilets. Many countries spend less than 1% of national income on water. Poor people also waste much time walking miles to collect small amounts of water. Lesson Plan - Dirty Water, So What? Understanding all of the different ways that water can cause problems in a society can be a big challenge. 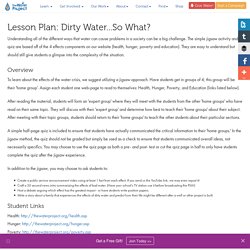 The simple jigsaw activity and quiz are based off of the 4 effects components on our website (health, hunger, poverty and education). They are easy to understand but should still give students a glimpse into the complexity of the situation. Overview To learn about the effects of the water crisis, we suggest utilizing a jigsaw approach. Have students get in groups of 4; this group will be their 'home group'. After reading the material, students will form an 'expert group' where they will meet with the students from the other 'home groups' who have read on their same topic.