Heliocene. *****South Korea produces #cleanenergy. They've covered this bike lane with #solar panels protecting cyclists from the sun and traffic while producing energy. We have the solutions to the #climatecrisis. Implement them. #ActOnClimate #climate #ener. For the first time ever India □□ is investing more in solar power than in coal. Such a huge positive change. Bravo!

*****How is electricity made? How does renewable energy work? Solar, Wind & Wave power Explained. Geography made easy sur Twitter : "Amazing example of individual mitigation of #climatechange with #solar power... awesome video for student to show this can be done on a scale ... not just a few house like here in the UK. #geographyteacher #geography #gl. Here's a look at our new 400kw solar energy installation.Our new panels make up the largest subsidy-free solar installation in the South West. The carbon emissions saved are estimated to be the equivalent of planting 13,000 football fields worth of trees!

Solar methanol. Simon Kuestenmacher sur Twitter : "#SaudiArabia wants to wean its economy off #oil and signed a memorandum to build 200 GW of #SolarPower by 2030 for $200bn. That's a lot of solar (200x bigger than today's largest solar plant). The images below show the p. Warrington Borough Council's set to become the first local authority in the UK to generate 100% of the electricity it uses from renewable sources. It's building two solar farms in Yorkshire. One will power council buildings while the other sells energy to. Solar panel desalination. *****The world owes thanks to #Germany for making electricity from sunshine commercially available to the world And to #China for scaling manufacturing to make #solar commercially the cheapest way to build new energy generation in.

Got a question about solar? Just ask. We'll do video responses. 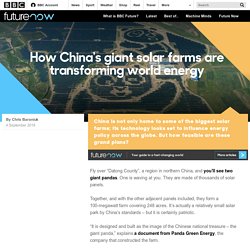 A'Level Geography is so topical -California poised to be first state to require solar panels on new homes. *****Solar in China: Do people understand the magnitude of this? This is the power equivalent of 10 giant nuclear plants brought on line in three months. The Nanticoke Generating Station used to be the world's largest coal power plant. Now they're turning it into a solar plant. #YEARSproject #WeCanSolveThis… Eugene Wilkie sur Twitter : "As a solar company, we are devastated to learn Trump has imposed a 30% tariff on solar panels virtually killing the solar industry. Solar employs more people than coal and oil combined. today's decision will cause the loss of. 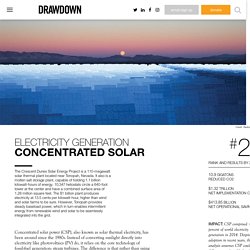 This solution replaces conventional electricity-generating technologies such as coal, oil, and natural gas power plants. Presently, there are four main concentrated solar power (CSP) technologies competing for the market: 1) Parabolic Trough Collectors; 2) Parabolic Dish Collectors; 3) Heliostat Field Collectors (Tower); and 4) Linear Fresnel Reflectors. Though the Parabolic Trough is the oldest and has the most widespread use, the newest (Tower) is the most likely to succeed, since it is the most economically viable technology that incorporates storage—increasingly a requirement of CSP. This analysis models all CSP technologies, with and without storage. Methodology Total Addressable Market [1] Adoption Scenarios [3] Financial Model Integration [7] Results Discussion.

Solar Power Potential Of The United States Source. Ourrzazate Solar Power Station, Morocco. via Daily Overview. Japanese Farmers Producing Crops & Solar Energy Simultaneously #fukushima. The power plant of the future is in your home. The price of solar power has fallen dramatically in the past four decades. 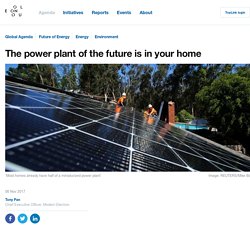 This wonderful development has empowered individuals to install solar panels in their homes and produce their own energy. Individuals with home solar have become more independent and can avoid potential increases in electricity bills from utilities. Moreover, it allows homeowners to better control and reduce their greenhouse gas footprint. Falling solar photovoltaic prices Image: Bloomberg New Energy Finance The cost of batteries is also falling, driven by economies of scale and technology improvements for rechargeable lithium-ion batteries.

Independence from the electricity grid is hard to achieve There are, however, seasonal variations in the supply of wind and solar energy. There is no battery technology today that can economically store enough electricity for weeks of blackouts, let alone months. Utilities are pushing back too. But are there new technologies that can disrupt this picture? How does it work? Share. Danish school is completely covered with over 12,000 sea green solar panels #educational too! *****Roll-up Solar Panels Power Holm Island, Wales. Holm Island, off the coast of Cardiff and neighbour to fellow Island Steep Holm, is meeting part of its power requirements using technologically-advanced roll-up solar panels. 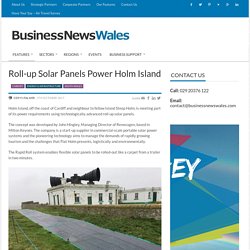 The concept was developed by John Hingley, Managing Director of Renovagen, based in Milton Keynes. The company is a start-up supplier in commercial-scale portable solar power systems and the pioneering technology aims to manage the demands of rapidly growing tourism and the challenges that Flat Holm presents, logistically and environmentally. The Rapid Roll system enables flexible solar panels to be rolled-out like a carpet from a trailer in two minutes. The key design element, making the panels rollable and flexible, provides a much larger power capacity that can be housed into a smaller carrier.

A 4×4’s trailer can hold enough solar panelling to power a 120-bed mobile clinic or to desalinate 25,000 litres of sea water every day. More #floatovoltaics Huge floating #solar power plant to be built in India. If you want to get solar panels, these are the ones you want! #saturdaymorning: A brilliant idea. Solar panel roads in France. #tech #innovation #solarpower #environment #france. *****Rudbaxton Solar Park (drone footage) *****China's Panda-shaped solar field. Solar has the brightest sustainable energy future. Here's why. Humans consume 221 tonnes of coal, 1,066 barrels of oil, and 93,000 metric cubes of natural gas per second. 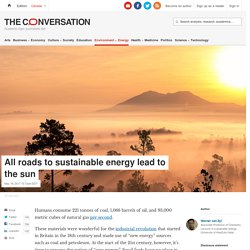 These materials were wonderful for the industrial revolution that started in Britain in the 18th century and made use of “new energy” sources such as coal and petroleum. At the start of the 21st century, however, it’s time to reassess the notion of “new energy”. Fossil fuels have no place in any long-term sustainable energy solution for the planet. It needs to be replaced with renewable energy sources. But which ones? Sooner or later humanity needs to get its head around the fact that the only long-term sustainable energy solution is solar energy. Nowhere in warm climates should water be heated with electricity. Solar hot water is way more efficient! *****USA solar: The Ivanpah Solar Electric Generating System. Solar accounts for 2x+ more American jobs than coal.

Solar power breaks #UK records thanks to sunny #weather - shame the #Tories aren't sunny about #renewable #energy. *****And FYI, I bet a record for the biggest solar percentage will be set this weekend. >30%. #solarbingo @UKPowerNetworks watch these tweets! Japan: 'solar islands' replace nuclear power 2 more plants announced. How much space needs to be covered in solar to power Earth @MohsMarlyn. *****This island in American Samoa now runs on nearly 100% solar energy by @TeslaMotors. Solar power is transforming the lives of some of the world's poorest farmers. Here's how.

*****World's first solar-powered road. *****Smartflower: This #solar energy system has forms of petals that follow the movement of the sun, as sunflowers do. *****Solar energy potential: Google helps analyze if rooftop solar panels are good deal. The company that lets you compare air fares and translate foreign languages online wants to make it easier to weigh the costs and benefits of installing solar panels on household rooftops. 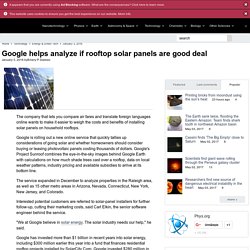 Google is rolling out a new online service that quickly tallies up considerations of going solar and whether homeowners should consider buying or leasing photovoltaic panels costing thousands of dollars. Google's Project Sunroof combines the eye-in-the-sky images behind Google Earth with calculations on how much shade trees cast over a rooftop, data on local weather patterns, industry pricing and available subsidies to arrive at its bottom line. The service expanded in December to analyze properties in the Raleigh area, as well as 15 other metro areas in Arizona, Nevada, Connecticut, New York, New Jersey, and Colorado. *****Solar energy potential: Google's Project Sunroof Claims 80% Of US Roofs Analyzed Are Suitable For Solar Panels. Clean Power Published on March 22nd, 2017 | by Steve Hanley March 22nd, 2017 by Steve Hanley Originally published on Solar Love. 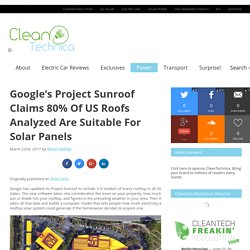 Google has updated its Project Sunroof to include 3-D models of every rooftop in all 50 states. The new software takes into consideration the trees on your property, how much sun or shade hits your rooftop, and figures in the prevailing weather in your area. *****Solar energy potential: Google's Project Sunroof expands to 7 million homes in Germany. *****Solar power might be getting cheaper (chart), but most things don't run on it #climate. *****Renewables' deep-sea mining conundrum. Image copyright NOC/NERC British scientists exploring an underwater mountain in the Atlantic Ocean have discovered a treasure trove of rare minerals. 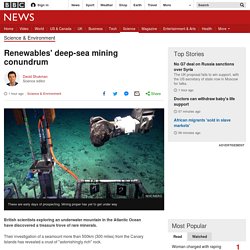 Their investigation of a seamount more than 500km (300 miles) from the Canary Islands has revealed a crust of "astonishingly rich" rock. Samples brought back to the surface contain the scarce substance tellurium in concentrations 50,000 times higher than in deposits on land. Tellurium is used in a type of advanced solar panel, so the discovery raises a difficult question about whether the push for renewable energy may encourage mining of the seabed. The rocks also contain what are called rare earth elements that are used in wind turbines and electronics. Energy implications Known as Tropic Seamount, the mountain stands about 3,000m tall – about the size of one of the middle-ranging Alpine summits – with a large plateau at its top, lying about 1,000m below the ocean surface. "It's a dilemma for society - nothing we do comes without a cost. 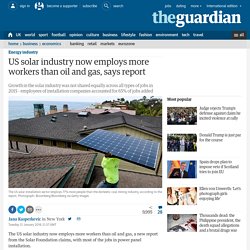 Last year, the US solar industry grew by 20% for a third year in a row, according to the foundation’s National Solar Job Census 2015. By the end of 2015, it employed nearly 209,000 solar workers, more than those employed in oil and gas extraction. However, the growth in the solar industry was not shared equally across all types of jobs. Manufacturing, project development, and sales jobs have all remained steady over the past five years. Only the jobs in installation increased, from 43,934 jobs in 2010 to 119,931 in 2015. “Employees of installation companies accounted for 22,900 or 65% of the new jobs added in 2015,” according to the report. According to the US Department of Labor, there were just 184,500 Americans working in oil and gas extraction in December 2015 – nearly 17,000 fewer workers than a year ago. Discreet new SolarSkin panels completely blend in with their environment. Sistine Solar is out to change the way people view rooftop solar. 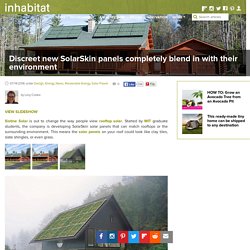 Started by MIT graduate students, the company is developing SolarSkin solar panels that can match rooftops or the surrounding environment. This means the solar panels on your roof could look like clay tiles, slate shingles, or even grass. Inspired by companies like Apple and Tesla, Sistine Solar co-founders Senthil Balasubramanian and Ido Salama aim to combine elegant design with revolutionary technologies.