What is the Global Apollo Program? How Africa's fastest solar power project is lighting up Rwanda. “Arise, shine for your light has come,” reads a sign at the entrance to the first major solar power farm in east Africa. 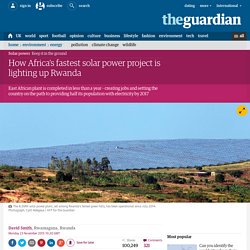 The 8.5 megawatt (MW) power plant in Rwanda is designed so that, from a bird’s-eye view, it resembles the shape of the African continent. “Right now we’re in Somalia,” jokes Twaha Twagirimana, the plant supervisor, during a walkabout of the 17-hectare site. The plant is also evidence, not only of renewable energy’s increasing affordability, but how nimble it can be. The $23.7m (£15.6m) solar field went from contract signing to construction to connection in just a year, defying sceptics of Africa’s ability to realise projects fast. The setting is magnificent amid Rwanda’s famed green hills, within view of Lake Mugesera, 60km east of the capital, Kigali. From dawn till dusk the computer-controlled photovoltaic panels, each 1.9 sq metres, tilt to track the sun from east to west, improving efficiency by 20% compared to stationary panels. The DESERTEC Vision. 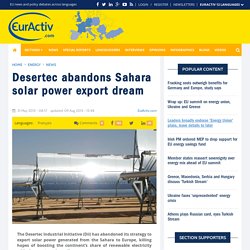 In a telephone interview with EurActiv, Dii CEO Paul van Son admitted that the project’s initial export-focus represented “one-dimensional thinking”. Although the industrial alliance was set up to develop renewable energy supplies in the Maghreb to feed up to 20% of European electricity demand by 2050, Dii now concedes that Europe can provide for most of its needs indigenously. “If we talk about renewable energy from North Africa, only a small fraction will ultimately supply the European market,” said van Son, adding that the European market could supply up to 90% of its own power demand. “Frankly, four years ago Desertec was all about bringing energy from North Africa. We abandoned that one-dimensional thinking. Desertec ‘too expensive and utopian’ Solar Farming in Africa: Green Electricity Powered by the Sun - iq2 Shorts. The best idea in a long time: Covering parking lots with solar panels. 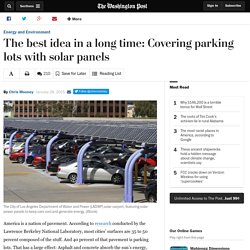 (iStock) America is a nation of pavement. According to research conducted by the Lawrence Berkeley National Laboratory, most cities’ surfaces are 35 to 50 percent composed of the stuff. And 40 percent of that pavement is parking lots. That has a large effect: Asphalt and concrete absorb the sun’s energy, retaining heat — and contributing to the “urban heat island effect,” in which cities are hotter than the surrounding areas.

So what if there were a way to cut down on that heat, cool down the cars that park in these lots, power up those parked cars that are electric vehicles (like Teslas), and generate a lot of energy to boot? It’s just what it sounds like — covering up a parking lot with solar panels, which are elevated above the ground so that cars park in the shade beneath a canopy of photovoltaics. Solar shingle. Solar Shingles, also called photovoltaic shingles, are solar panels or solar modules designed to look like and function as conventional slate or asphalt shingle roofing materials. 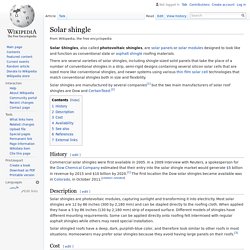 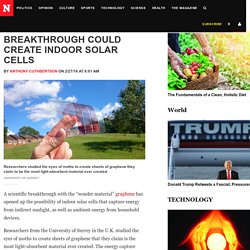 Researchers from the University of Surrey in the U.K. studied the eyes of moths to create sheets of graphene that they claim is the most light-absorbent material ever created. The energy capture method could be used to power Internet of Things (IoT) devices, such as smart clothing, wearables and smart wallpaper. “We realized that the moth’s eye works in a particular way that traps electromagnetic waves very efficiently,” Professor Ravi Silva, head of the Advanced Technology Institute at the University of Surrey, tells Newsweek .

“As a result of our studies, we’ve been able to mimic the surface of a moth’s eye and create an amazingly thin, efficient, light-absorbent material made of graphene.” Subscribe now - Free phone/tablet charger worth over $60.