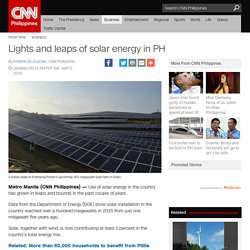 Data from the Department of Energy (DOE) show solar installation in the country reached over a hundred megawatts in 2015 from just one megawatt five years ago. Solar, together with wind, is now contributing at least 1 percent in the country's total energy mix. Related: More than 60,000 households to benefit from Pililla Wind Farm Energy officials are giving credit to the government's feed-in tariff program — a set of incentives awarded to renewable energy developers that build and operate plants within the government's deadline. The DOE initially set a target of an additional 50 megawatts of solar installation in 2013, but increased it to 500 megawatts because of the growing interest of renewable energy developers. 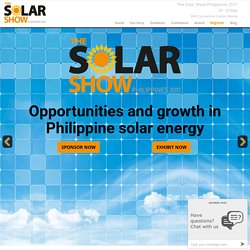 The Exhibition Driven by generating genuine business connections, The Solar Show Philippines is committed to showcasing your products, ideas and innovations and ensuring you meet with the right customers. Choose your package 2-DAY PASSLocal Company Individual Pass Final Price USD $660 Group Booking of 3 or more Final Price USD $495. Batangas’ Largest Solar Farm – Harvesting Solar Power in the Philippines. A past unproductive land in Barangay Paraiso, Batangas, became a sea of 200,000 solar panels, harvesting heat from the sun and generates enough electricity to power the whole of Western Batangas. 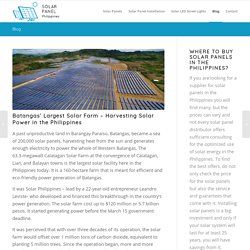 The 63.3-megawatt Calatagan Solar Farm at the convergence of Calatagan, Lian, and Balayan towns is the largest solar facility here in the Philippines today. It is a 160-hectare farm that is meant for efficient and eco-friendly power generation of Batangas. It was Solar Philippines – lead by a 22-year-old entrepreneur Leandro Leviste- who developed and financed this breakthrough in the country’s power generation. The solar farm cost up to $120 million or 5.7 billion pesos. It started generating power before the March 15 government deadline. It was perceived that with over three decades of its operation, the solar farm would offset over 1 million tons of carbon dioxide, equivalent to planting 5 million trees.

Solar Energy vs. Coal Power Plants – Is Coal Really Cheaper? Many people in the Philippines think that solar energy is expensive and is not yet competitive. 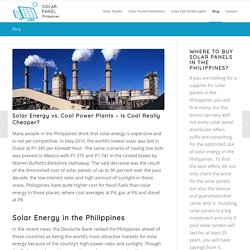 In May 2016, the world’s lowest solar was bid in Dubai at P1.345 per kilowatt hour. The same scenario of having low bids was present in Mexico with P1.575 and P1.741 in the United States by Warren Buffett’s Berkshire Hathaway. The said decrease was the result of the diminished cost of solar panels of up to 90 percent over the past decade, the low-interest rates and high amount of sunlight in those areas. Philippines have quite higher cost for fossil fuels than solar energy in those places; where coal averages at P4, gas at P6 and diesel at P8. Top 5 Solar-powered Malls in the Philippines. The use of solar is the current trend in the power generation industry. 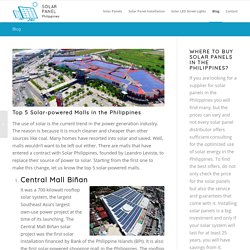 The reason is because it is much cleaner and cheaper than other sources like coal. Many homes have resorted into solar and saved. Well, malls wouldn’t want to be left out either. There are malls that have entered a contract with Solar Philippines, founded by Leandro Leviste, to replace their source of power to solar. Starting from the first one to make this change, let us know the top 5 solar-powered malls. Solar Panel Installation. As a specialist for planning and installation of photovoltaic solar systems we have countless reference installations. 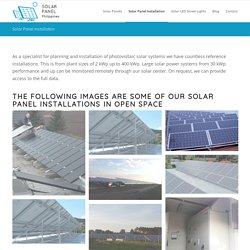 This is from plant sizes of 2 kWp up to 400 kWp. Large solar power systems from 30 kWp performance and up can be monitored remotely through our solar center. On request, we can provide access to the full data. The following images are some of our solar panel installations in open space Solar panel installations for commercial and industrial buildings Large roofs on industrial and commercial buildings offer a great opportunity to utilize the space for solar energy. Solarsystemsphilippines. Solar Energy Philippines by Solaric. Best solar panels in the Philippines - Meister Solar. Marlon Mendoza’s Alternative Energy Blog. The Solar Panel Philippines – How to fight brownout. Solar Panel Philippines - Solar System for sale.