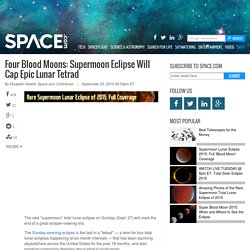 The Sunday evening eclipse is the last in a "tetrad" — a term for four total lunar eclipses happening at six-month intervals — that has been stunning skywatchers across the United States for the past 18 months, and also sparking conspiracy theories about what it could mean. "The most unique thing about the 2014-2015 tetrad is that all of them are visible for all or parts of the USA," NASA eclipse expert Fred Espenak said in a statement last year. [Supermoon Lunar Eclipse: Complete Blood Moon Coverage] What makes Sunday's eclipse even more special, however, is that it will occur when the moon is at its closest point to Earth in its elliptical orbit and therefore appears abnormally large and bright in the sky. 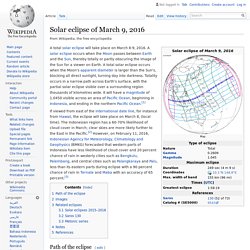 A solar eclipse occurs when the Moon passes between Earth and the Sun, thereby totally or partly obscuring the image of the Sun for a viewer on Earth. A total solar eclipse occurs when the Moon's apparent diameter is larger than the Sun's, blocking all direct sunlight, turning day into darkness. Totality occurs in a narrow path across Earth's surface, with the partial solar eclipse visible over a surrounding region thousands of kilometres wide. It will have a magnitude of 1.0450 visible across an area of Pacific Ocean, beginning in Indonesia, and ending in the northern Pacific Ocean.[1] If viewed from east of the international date line, for instance from Hawaii, the eclipse will take place on March 8, (local time).

Path of the eclipse[edit] On March 9 2016 a large area of the Pacific, covering Indonesia, Malaysia, but also large parts of South-East Asia and Australia will witness a partial solar eclipse. Images[edit] Notes[edit] The Antichrist and the Four Blood Moons. Solar Eclipse: What you should know. Solar Eclipse 2016 from Bishan Park Singapore. Eye Safety During Solar Eclipses.

Never look directly at the Sun without proper eye protection. 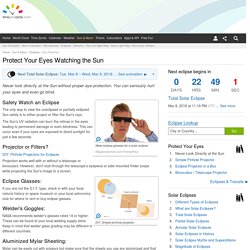 You can seriously hurt your eyes and even go blind. Safely Watch an Eclipse The only way to view the uneclipsed or partially eclipsed Sun safely is to either project or filter the Sun's rays. The Sun’s UV radiation can burn the retinas in the eyes leading to permanent damage or even blindness. This can occur even if your eyes are exposed to direct sunlight for just a few seconds. Projector or Filters? DIY: Pinhole Projectors for Eclipses Projection works well with or without a telescope or binoculars. Eclipse Glasses: If you are not the D.I.Y. type, check in with your local natural history or space museum or your local astronomy club for where to rent or buy eclipse glasses. Welder's Goggles: NASA recommends welder's glasses rated 14 or higher. Aluminized Mylar Sheeting: Mylar can be easily cut with scissors but make sure that the sheets you use are aluminized and that you take the advice of experts while using it. 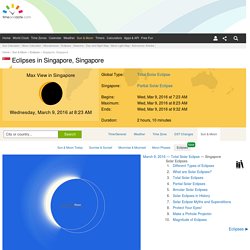 ✔ Space Exploration - "Our Universe" (Episode 01) [2015 Documentary] Total solar eclipse delights Australians. Solar eclipse on March 9: What you need to know and where to view it in Singapore, Singapore News. SINGAPORE - A solar eclipse will take place on Wednesday (March 9), and thousands are expected to gather at various vantage points across the island to view it. 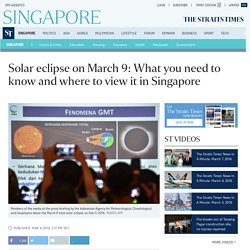 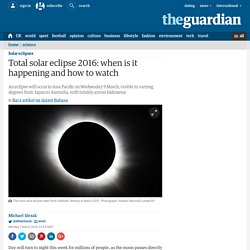 On Wednesday 9 March, people in some parts of Australia and south-east Asia will be able to witness the event. It will also be visible in Hawaii, east of the international dateline, where it will still be Tuesday 8 March. For those further west or east in Europe and America, it will already be night, so the sun will not be visible. Here’s what you need to know. Total Solar Eclipse 2006. Solar Eclipse Page. The next Total Eclipse of the Sun Visible from the USAClick for special web page on the Total Solar Eclipse of 2017 Aug 21 Solar Eclipses: Past and Future The following links give information on all eclipses of the Sun and Moon from 2000 through the current year. 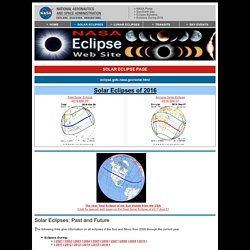