Google Unveils Plans for Wi-Fi on Steroids - Past News. Google on Monday unveiled plans for a new generation of wireless devices to operate on soon-to-be-vacant television airwaves, and sought to alleviate fears that this might interfere with TV broadcasts or wireless microphones. 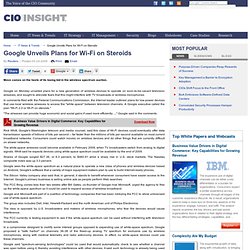 In comments filed with the Federal Communications Commission, the Internet leader outlined plans for low-power devices that use local wireless airwaves to access the "white space" between television channels. A Google executive called the plan "Wi-Fi 2.0 or Wi-Fi on steroids. " "The airwaves can provide huge economic and social gains if used more efficiently ... ," Google said in the comments. Rick Whitt, Google's Washington telecom and media counsel, said this class of Wi-Fi devices could eventually offer data transmission speeds of billions of bits per second -- far faster than the millions of bits per second available on most current broadband networks. Shares of Google surged $27.36, or 6.3 percent, to $460.91 amid a sharp rise in U.S. stock markets.

Google Eager for FCC Airwaves as WiFi on Steroids - Mobile and Wireless from eWeek. With the Federal Communications Commission set to deliver the final rules for opening television white spaces spectrum to the public, Google is eyeing the potential for speedy WiFi networks as new real estate for its Web applications. 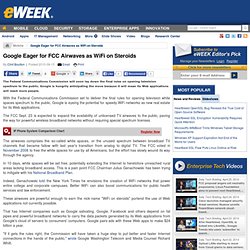 The FCC Sept. 23 is expected to expand the availability of unlicensed TV airwaves to the public, paving the way for powerful wireless broadband networks without requiring special spectrum licenses. The airwaves comprises the so-called white spaces, or the unused spectrum between broadcast TV channels that became fallow with last year's transition from analog to digital TV. The FCC voted in November 2008 to free the white spaces for use by all Americans, but the effort has slowly wound its way through the agency. In 10 days, white spaces will be set free, potentially extending the Internet to heretofore unreached rural areas lacking broadband access. FCC Approves White-Space Use for Unlicensed 'Super WiFi' - IT Infrastructure from eWeek. When the Federal Communications Commission issued its press release about the approval of additional unlicensed spectrum in what are called "white spaces," it referred to the coming technologies as "Super WiFi. 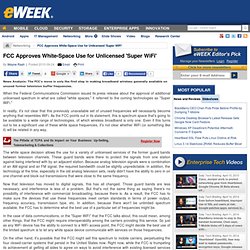 " In reality, it's not clear that this previously unavailable set of unused frequencies will necessarily become anything that resembles WiFi. As the FCC points out in its statement, this is spectrum space that's going to be available to a wide range of technologies, of which wireless broadband is only one. Even if this turns out to be a significant use of these white space frequencies, it's not clear whether WiFi (or something like it) will be related in any way. The white space decision allows the use for a variety of unlicensed services of the former guard bands between television channels. These guard bands were there to protect the signals from one station against being interfered with by an adjacent station.

Best Wi-Fi radios. Enabling Universal Spectrum Access. Airspan. Long distance WiFi rule could be just 10 days away. The FCC is due to meet on September 23, and on its agenda is a proposal on white spaces. 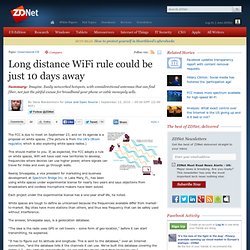 (The picture is from the UK's Ofcom regulator, which is also exploring white space radios.) This should matter to you. If, as expected, the FCC adopts a rule on white spaces, WiFi will have vast new territories to develop, frequencies where devices can use higher power, where signals can travel for miles and even go through walls. Neeraj Srivaspaba, a vice president for marketing and business development at Spectrum Bridge Inc. in Lake Mary, FL, has been using white spaces under experimental license for nearly two years and says objections from broadcasters and cordless microphone makers have been solved.

Each project under the experimental license has a one-year shelf life, he noted. White spaces are tough to define as unlicensed because the frequencies available differ from market-to-market. The answer, Srivaspaba says, is a geolocation database. "It has to figure out its latitude and longitude.