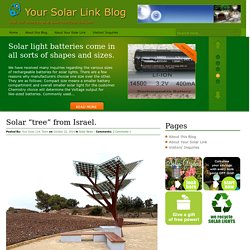 It features solar panels positioned as leaves on metal branches made of pipes and was designed to blend into parks and other green public spaces. Apart from offering shade, Sologic’s eTree has a water fountain, a WiFi hotspot, a docking station to charge devices, and lights up with LEDs at night, according to the company. Boston and New York get public solar-charging stations.

Park benches at select locations in Boston are getting a 21st century solar-powered upgrade. 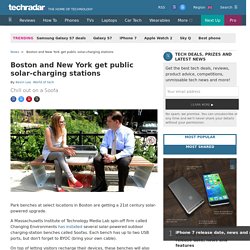 A Massachusetts Institute of Technology Media Lab spin-off firm called Changing Environments has installed several solar-powered outdoor charging-station benches called Soofas. Each bench has up to two USB ports, but don't forget to BYOC (bring your own cable). On top of letting visitors recharge their devices, these benches will also collect location-based information using on-board sensors including noise, temperature, and air pollution levels. Once collated, the Soofas will upload this environmental data through Verizon's 4G LTE network to a website for anyone to view. 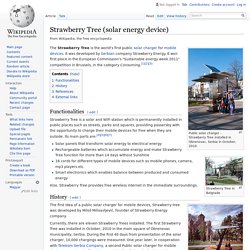 Strawberry Tree in Belgrade The Strawberry Tree is the world’s first public solar charger for mobile devices. It was developed by Serbian company Strawberry Energy. A Public Phone Charging Station That Harnesses Power From Pedestrians' Footsteps. Since the millennium, around 2 million pay phones have disappeared from U.S. street corners. 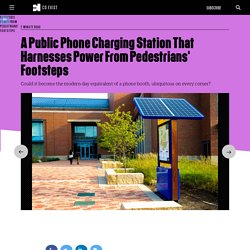 Maybe renewably powered smartphone chargers will eventually replace them. A startup with a charger that combines solar and foot power hopes its invention will become as ubiquitous in dense urban neighborhoods as phone booths once were. Though the EnGo isn't the first public charging station to use solar panels, it may be the first to also incorporate kinetic power. In front of the charging station, two tiles capture the energy from each footstep as pedestrians walk by.

"We wanted to create a combination of kinetic energy and solar energy, because we saw that each approach on its own has certain disadvantages," says Petar Mirovic, CEO of Volta Group, the company manufacturing the EnGo. The station can charge up to 14 different devices at a time, and includes commonly used cables that can easily be swapped out as technology changes, along with wireless charging pads. 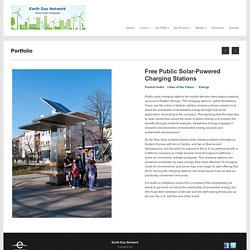 The charging stations, called Strawberry Trees, are the vision a Serbian startup company whose mission is to show the practicality of renewable energy through real world application. According to the company, “Recognizing that the best way to raise awareness about the issue of green energy is to present the benefits through practical example, Strawberry Energy engages in research and promotion of renewable energy sources and sustainable development.” So far, they have installed twelve solar charging stations throughout Eastern Europe with ten in Serbia, and two in Bosnia and Herzegovina, but has plans to expand to the U.S. by partnering with a California company to install several more throughout California – some on community college campuses. 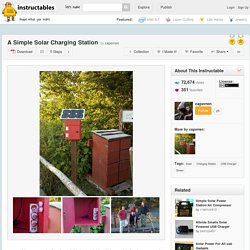 Again, if you find better prices or have a cheaper way to make it, please share so everyone can benefit. Eagle Solar Powered Charging Station for Mobile Devices. Public charging station powers mobile devices with footsteps and solar panels. The ENGO charging station uses kinetic tiles and solar panels to charge up to 14 smartphones at a time, and provides free WiFi access and an emergency phone. 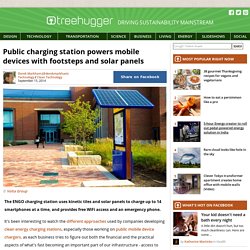 It's been interesting to watch the different approaches used by companies developing clean energy charging stations, especially those working on public mobile device chargers, as each business tries to figure out both the financial and the practical aspects of what's fast becoming an important part of our infrastructure - access to power for our gadgets. A new contender has hit the streets (or sidewalks, as it were), with an installation of an ENGO Public Charging Station at Webster University in St. Louis, MO, which uses a combination of kinetic tiles (to harvest energy from footsteps) and solar panels to recharge up to 14 mobile devices at a time. The ENGO station, from Volta Group, includes 10 charging cables (to fit most models of phones and tablets), two USB charge ports, and two wireless charging pads for compatible devices. Street Charge solar charging stations for smartphones make New York debut - Images. Telecomms provider AT&T has partnered with portable solar power systems developer Goal Zero and Brooklyn design studio Pensa for the roll out of Street Charge public solar charging stations in New York. 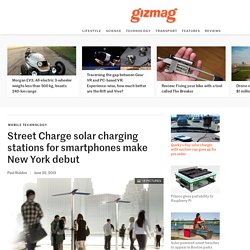 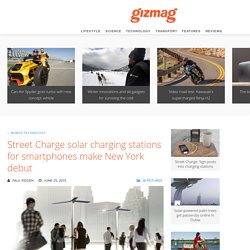 Each station is topped by PV panels that charge up a powerful internal battery to provide smartphone and tablet users with a free juice up. The first units debuted at Riverside Park, Brooklyn Bridge Park, Fort Greene Park and Governor's Island on June 18, and will be followed by another 20 or so stations in the coming months. The original Street Charge station concepts were designed in early 2012 by Pensa as, according to the group's Marco Perry, "an elegant all-in-one community solution for solar charging of mobile devices.

" Development sketches then became working prototypes. One sported an LED street lamp with a PV panel on top, and another was created in collaboration with the Dumbo Business Improvement District with solar panels above sun umbrellas for use in a cafe setting. Solar Charging Stations. Street Charge solar charging stations for smartphones make New York debut. Solar-powered palm trees get passersby online in Dubai. People out and about in Dubai can now use palm trees to get online and recharge their phones. 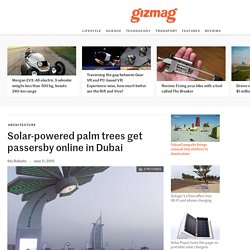 The Smart Palm is hi-tech version of the date palm tree and is being rolled out by D-Idea Media. In addition to Wi-Fi and device charging, it provides local info, directions, seating and shade. The first Smart Palm was installed in Dubai's Zabeel Park in April and now a second, located on the beach near to the Burj Al Arab, was opened last Thursday. The trees are 6.5 m (21.3 ft) tall and are reminiscent of Sologic's eTrees. The date palm shape was chosen as a symbol of sustainability, with it historically having been harvested for food and materials. The Smart Palms are powered by 13.8 sq m (148.5 sq ft) of photovoltaic panels that are specially designed to fit the shape of the "leaves.

" Sologic's eTree offers free Wi-Fi and phone charging. Unfortunately, money doesn't grow on trees. Wi-Fi and electricity, on the other hand, sometimes do. The eTree, created by Israeli renewables firm Sologic, is a public space intervention aimed at provide a place to rest, connect to the internet and recharge devices. The eTree is reminiscent of the Green Sun Rising Solar Benches that provide shade and device charging and the Wi-Fi cows that were dotted around the UK's Glastonbury Festival last year. Sycamore Energy Inc.