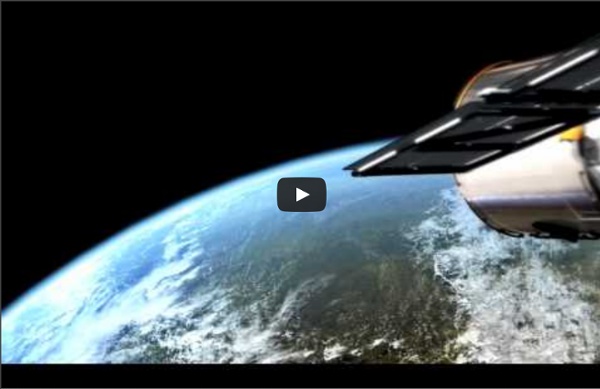 Massive solar storm to hit Earth in 2012 with 'force of 100m bombs' - Yahoo! India News SDO helps measure magnetic fields on the sun's surface (PhysOrg.com) -- Science nuggets are a collection of early science results, new research techniques, and instrument updates that further our attempt to understand the sun and the dynamic space weather system that surrounds Earth. A subset of data that helps map out the sun's magnetic fields was recently released from the Solar Dynamics Observatory (SDO). Observations that measure the strength and direction of magnetic fields on the solar surface -- known as vector magnetograms -- play a crucial role in understanding how those fields change over time and trigger giant eruptions off the surface of the sun such as solar flares and coronal mass ejections (CMEs). Collecting the information needed to make vector magnetograms is one of several tasks performed by SDO's Helioseismic and Magnetic Imager (HMI), an instrument led by a team at Stanford University. HMI relies on interpreting the way light is affected as it travels through the fields in order to measure them from afar.

The strange case of solar flares and radioactive elements (8/25/2010) It's a mystery that presented itself unexpectedly: The radioactive decay of some elements sitting quietly in laboratories on Earth seemed to be influenced by activities inside the sun, 93 million miles away. Is this possible? Researchers from Stanford and Purdue University believe it is. But their explanation of how it happens opens the door to yet another mystery. There is even an outside chance that this unexpected effect is brought about by a previously unknown particle emitted by the sun. "That would be truly remarkable," said Peter Sturrock, Stanford professor emeritus of applied physics and an expert on the inner workings of the sun. The story begins, in a sense, in classrooms around the world, where students are taught that the rate of decay of a specific radioactive material is a constant. Random numbers But that assumption was challenged in an unexpected way by a group of researchers from Purdue University who at the time were more interested in random numbers than nuclear decay.

Russia wants to build Moonbase Alpha The Russian Space Agency (Roscosmos) has suffered a string of embarrassing space-related debacles over the past few months. The most notable failures? The infamous loss of the Phobos-Grunt probe slated to survey a Martian moon, the disintegration of an unmanned ISS-bound space freighter and several satellite crashes. But Roscosmos chief Vladimir Popovkin doesn’t appear to be particularly concerned over the above-mentioned incidents. No, Popovkin is apparently looking towards the future, as Moscow now believes it is ready to build a manned research base on the moon. "We don’t want the man to just step on the Moon," Popovkin told Vesti FM radio station in an interview transcribed by RIA Novosti. "Today, we know enough about [the moon], we know that there is water in its polar areas." According to Popovkin, Roscosmos is currently "discussing how to begin [the Moon’s] exploration with NASA and the European Space Agency."

Phylointelligence: Evolution for Everyone Undetectable Extraterrestrials? World-Leading Physicist Says "They Could Exist in Forms We Can't Conceive" (A Weekend Classic) “I suspect there could be life and intelligence out there in forms we can’t conceive. Just as a chimpanzee can’t understand quantum theory, it could be there as aspects of reality that are beyond the capacity of our brains.” During the conference entitled ‘The Detection of Extra-terrestrial Life and the Consequences for Science and Society’, Rees asked whether the discovery of aliens would cause terror or delight on earth, the Telegraph reported. However, Frank Drake, the founder of SETI and Drake's Equation, told the conference that satellite TV and the “digital revolution” was making humanity invisible to aliens by cutting the transmission of TV and radio signals into space. The earth is currently surrounded by a 50 light year-wide “shell” of radiation from analogue TV, radio and radar transmissions. According to Drake, digital TV signals would look like white noise to a race of observing aliens. For proposition “B” to be correct would defy all logic. Casey Kazan via The Telegraph

Record-Breaking Photo Reveals a Planet-sized Object as Cool as the Earth Click on image below for a larger version. These two infrared images were taken by the Spitzer Space Telescope in 2004 and 2009. They show a faint object moving through space together with a white dwarf. The brown dwarf, named WD 0806-661 B, is the coldest companion object to be directly imaged outside our solar system. Credit: Kevin Luhman, Penn State University, October 2011 19 October 2011 — The photo of a nearby star and its orbiting companion -- whose temperature is like a hot summer day in Arizona -- will be presented by Penn State Associate Professor of Astronomy and Astrophysics Kevin Luhman during the Signposts of Planets conference at NASA's Goddard Space Flight Center on 20 October 2011. "This planet-like companion is the coldest object ever directly photographed outside our solar system," said Luhman, who led the discovery team. Click on either image below for a high-resolution version.

What are gravitational waves Video Reaction Engine's Skylon: A brilliantly British spaceplane Skip to Content Home » Reaction Engine's Skylon: A brilliantly British spaceplane Reaction Engine's Skylon: A brilliantly British spaceplane Bookmark/Search this post with: Copyright © 2014 . Copyright 2010 Ben Gilliland Theme by Dr. World's Smallest Ear Can Hear Germs | Nano-Ears & Sound Waves | NanoTechnology | LiveScience A pin dropping is pretty quiet. But what about a bacterium? Hearing anything smaller than a certain size would ordinarily be tough to do. BLOG: Video Hits a Trillion Frames Per Second Sound waves happen when air is compressed and decompressed by pressure waves. To measure sound waves made at tiny scales, though, you need a way to measure movements at a similarly small scale, and no microphone can do that. The laser beam forms a pair of “optical tweezers” — a laser beam is focused by a lens and that beam can then move tiny particles around. In this case, optical physicist Jochen Feldmann and his colleagues in the Photonics and Optoelectronics Group at the University of Munich in Germany trapped a 60-nanometer wide gold particle with a laser. BLOG: Is Star Trek’s Tractor Beam Possible? What they got was a way to hear vibrations with more sensitivity than ever before. So why care what a germ sounds like? Image: Alexander Ohlinger et al., Physical Review Letters