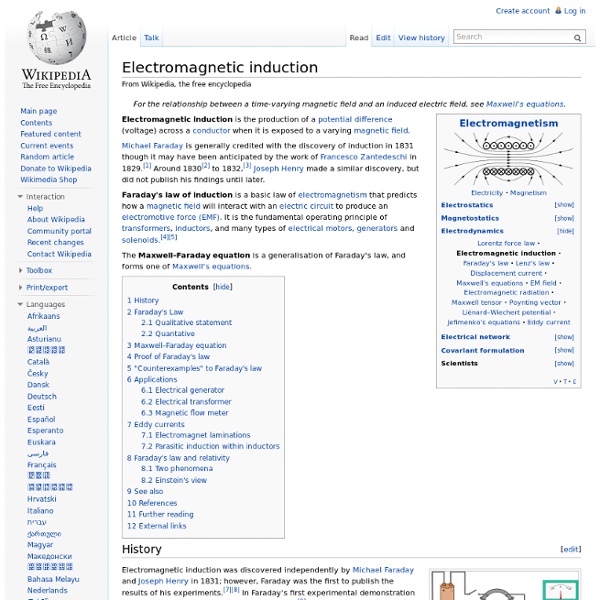 Electromagnetic induction is the production of a potential difference (voltage) across a conductor when it is exposed to a varying magnetic field. It is described mathematically by Faraday's law of induction, named after Michael Faraday who is generally credited with the discovery of induction in 1831. History[edit] A diagram of Faraday's iron ring apparatus. Electromagnetic induction was discovered independently by Michael Faraday and Joseph Henry in 1831; however, Faraday was the first to publish the results of his experiments.[2][3] In Faraday's first experimental demonstration of electromagnetic induction (August 29, 1831[4]), he wrapped two wires around opposite sides of an iron ring or "torus" (an arrangement similar to a modern toroidal transformer). Faraday explained electromagnetic induction using a concept he called lines of force. Faraday's law and the Maxwell–Faraday equation[edit] where is the electromotive force (EMF) and ΦB is the magnetic flux. the EMF on a wire loop is:

Electrical resistance An object of uniform cross section has a resistance proportional to its resistivity and length and inversely proportional to its cross-sectional area. All materials show some resistance, except for superconductors, which have a resistance of zero. The resistance (R) of an object is defined as the ratio of voltage across it (V) to current through it (I), while the conductance (G) is the inverse: may be most useful; this is called the "differential resistance". Introduction[edit] The hydraulic analogy compares electric current flowing through circuits to water flowing through pipes. In the hydraulic analogy, current flowing through a wire (or resistor) is like water flowing through a pipe, and the voltage drop across the wire is like the pressure drop that pushes water through the pipe. The voltage drop (i.e., difference in voltage between one side of the resistor and the other), not the voltage itself, provides the driving force pushing current through a resistor. Ohm's law[edit] where .

Electrical conductivity Definition[edit] Resistors or conductors with uniform cross-section[edit] A piece of resistive material with electrical contacts on both ends. where R is the electrical resistance of a uniform specimen of the material (measured in ohms, Ω) is the length of the piece of material (measured in metres, m) A is the cross-sectional area of the specimen (measured in square metres, m2). The reason resistivity is defined this way is that it makes resistivity an intrinsic property, unlike resistance. In a hydraulic analogy, passing current through a high-resistivity material is like pushing water through a pipe full of sand, while passing current through a low-resistivity material is like pushing water through an empty pipe. The above equation can be transposed to get Pouillet's law (named after Claude Pouillet): The resistance of a given material will increase with the length, but decrease with increasing cross-sectional area. The formula and General definition[edit] Conductivity is the inverse: [edit]

Magnetic field Magnetic field of an ideal cylindrical magnet with its axis of symmetry inside the image plane. The magnetic field is represented by magnetic field lines, which show the direction of the field at different points. In everyday life, magnetic fields are most often encountered as an invisible force created by permanent magnets which pull on ferromagnetic materials such as iron, cobalt or nickel and attract or repel other magnets. Magnetic fields are very widely used throughout modern technology, particularly in electrical engineering and electromechanics. The Earth produces its own magnetic field, which is important in navigation. Rotating magnetic fields are used in both electric motors and generators. History[edit] One of the first drawings of a magnetic field, by René Descartes, 1644. Three discoveries challenged this foundation of magnetism, though. Extending these experiments, Ampère published his own successful model of magnetism in 1825. Definitions, units, and measurement[edit]