BBC Solar System – Discover the beauty and strangeness of space 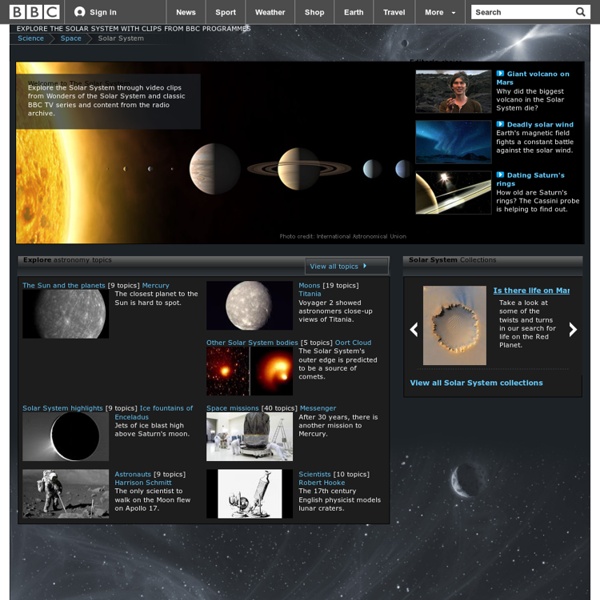 Fun Solar System Facts for Kids - Interesting Facts about the Solar System *Note that in the image above the sizes are to scale, but the relative distances are not. The solar system includes the Sun and all the objects that orbit around it due to its gravity. This includes things such as planets, comets, asteroids, meteoroids and moons. The Solar System formed around 4.6 billion years ago. Answering a 190-year old astronomical question Epsilon Aurigae was first given serious, systematic, scientific scrutiny in 1821. Early modern astronomers correctly classified it as an eclipsing binary variable star, with an invisible partner that will periodically dim the light as it eclipses the main star from the perspective of Earth. This happens every 27 years, and Epsilon Aurigae's apparent brightness drops for a period of more than a year. The nature of this partner has remained a mystery, even though we've been observing the star for nearly two centuries. Over the years, different ideas have come and gone. For the latter case to be correct, then the orbit of the disk around the darker companion star would have to be in the same plane as the orbit of the darker object (companion star) around Epsilon Aurigae, which would in turn have to be the exact same plane as Earth's vantage point in order to produce the sequence of events we observe here on Earth.

Windows to the Universe Ordering the Planets Remembering which order the planets come in can be difficult, so why not teach your class the following tricks? You could also ask the children to try to make up their own! (all lists should be read downwards) The International Astronomical Union have voted to change the status of Pluto. Denise Dickens also gave the following useful advice: If you get confused as to which M comes first remember, never put a Mars bar near the sun. Find more ideas and resources on our Earth and Beyond page. Stellarium The Solar System Our solar neighborhood is an exciting place. The Solar System is full of planets, moons, asteroids, comets, minor planets, and many other exciting objects. Learn about Io, the explosive moon that orbits the planet Jupiter, or explore the gigantic canyons and deserts on Mars. What Is The Solar System? The Solar System is made up of all the planets that orbit our Sun. In addition to planets, the Solar System also consists of moons, comets, asteroids, minor planets, and dust and gas. Everything in the Solar System orbits or revolves around the Sun. How Did The Solar System form? This is an important question, and one that is difficult for scientists to understand. Scientists believe that the Solar System evolved from a giant cloud of dust and gas. At the center of this spinning cloud, a small star began to form. Further away from the center of this mass where the star was forming, there were smaller clumps of dust and gas that were also collapsing. A Great Storm Beyond The Oort Cloud

The Sweden Solar System - Department of Astronomy Note! To navigate within the pages for Sweden Solar System, use the links in this column. På svenska. Models overview Map and directions News Models The Sun Globen, Stockholm Diameter: 71 m (solar disk) + the corona (the Sun's outer atmosphere) Bild: Ludvig Ehrenstråhle The Globe Arena in Stockholm is the largest spherical building in the world, and it represents the Sun in the SSS. Up Mercury Stockholms stadsmuseum, Slussen Diameter: 25 cm Distance from Globen: 2,9 km Bild: Annah Wirgén The model of Mercury is heated to symbolize its closeness to the Sun. Venus Diameter: 62 cm Distance from Globen: 5,5 km Foto: Gösta Gahm A new model of Venus, replacing the one stolen in 2011, is temporarily placed at the Institution for Space and Plasma Physics at the Kungl. Paul Schlyter The model of Venus at the Observatory Museeum in central Stockholm was made at the workshop at Liljevalchs Museeum. Earth/Moon Cosmonova, Naturhistoriska riksmuseet, Stockholm Diameter: 65 cm /18 cm Distance from Globen: 7,6 km Mars

SUN NASA'S New Look NASA's New Eye on the Sun Delivers Stunning First Images View related briefing materials here. NASA's recently launched Solar Dynamics Observatory, or SDO, is returning early images that confirm an unprecedented new capability for scientists to better understand our sun’s dynamic processes. Some of the images from the spacecraft show never-before-seen detail of material streaming outward and away from sunspots. "These initial images show a dynamic sun that I had never seen in more than 40 years of solar research,” said Richard Fisher, director of the Heliophysics Division at NASA Headquarters in Washington. A full-disk multiwavelength extreme ultraviolet image of the sun taken by SDO on March 30, 2010. Launched on Feb. 11, 2010, SDO is the most advanced spacecraft ever designed to study the sun. SDO will determine how the sun's magnetic field is generated, structured and converted into violent solar events such as turbulent solar wind, solar flares and coronal mass ejections.