Electrical Conductivity, USGS Water Science School. A Solar Powered Water Pump - How It Works And What It can Be Used For. Learn about possible uses and different kinds of solar powered water pumps. 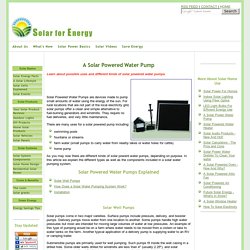 Solar Powered Water Pumps are devices made to pump small amounts of water using the energy of the sun. For rural locations that are not part of the local electricity grid, solar pumps offer a clean and simple alternative to fuel-burning generators and windmills. They require no fuel deliveries, and very little maintenance.

There are many uses for a solar powered pump including: swimming poolsfountains or streams farm water (small pumps to carry water from nearby lakes or water holes for cattle)home pump As you may now there are different kinds of solar powerd water pumps, depending on purpose. Solar Well Pumps Solar pumps come in two major varieties. Submersible pumps are primarily used for well pumping. A solar module can be mounted almost anywhere, but it should face in a southerly direction (for North America). How Does a Solar Water Pumping System Work? Installation More About Solar Home Use.

The Life-Giving Sun. The power generator in the Sun is in its center, buried deeply within it. 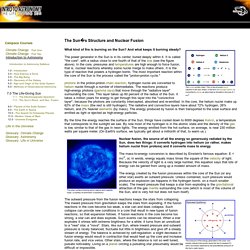 It is called "the core", with a radius close to one fourth of that of the star (see the figure above). In the core, pressures and temperatures are high enough to force fusion, that is, nuclear reactions whereby some nuclei merge to make others. It is the type of reaction that powers a hydrogen bomb. The most important reaction within the core of the Sun is the process called the "proton-proton cycle. " photons In the proton-proton chain reaction, hydrogen nuclei are converted to helium nuclei through a number of intermediates. By the time the energy reaches the surface of the Sun, things have cooled down to 6000 degrees Kelvin, a temperature that corresponds to the sunlight we see.

The mass-to-energy conversion is described by Einstein's famous equation: E = mc2, or, in words, energy equals mass times the square of the velocity of light. Thus, on the whole, our star shines with a steady light. How to Solar Power Your Home #8 - Grid Tied System - Enphase M250 Microinverters - Pt1. GetSharedSiteSession?rc=4&redirect= Figure 1 (a) Alignment of AT-rich interaction domain (ARID) proteins over the core ARID, generated using the MAP multiple-sequence alignment program. 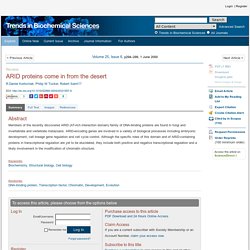