Giant Ribbon Discovered at the Edge of the Solar System 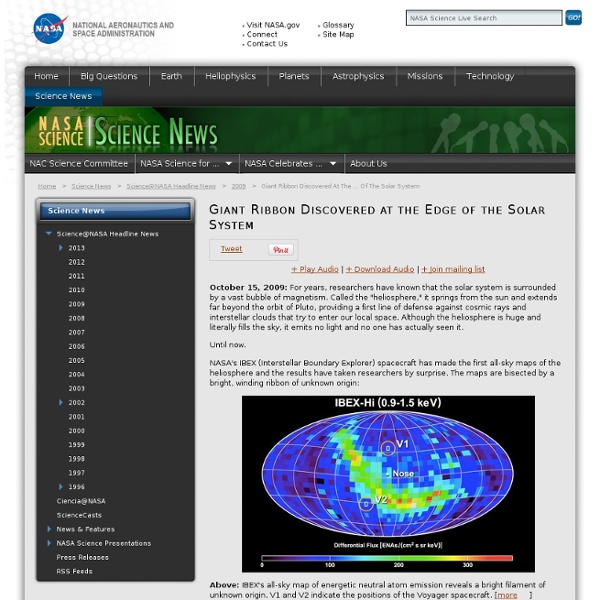 + Play Audio | + Download Audio | + Join mailing list October 15, 2009: For years, researchers have known that the solar system is surrounded by a vast bubble of magnetism. Called the "heliosphere," it springs from the sun and extends far beyond the orbit of Pluto, providing a first line of defense against cosmic rays and interstellar clouds that try to enter our local space. Until now. NASA's IBEX (Interstellar Boundary Explorer) spacecraft has made the first all-sky maps of the heliosphere and the results have taken researchers by surprise. Above: IBEX's all-sky map of energetic neutral atom emission reveals a bright filament of unknown origin. "This is a shocking new result," says IBEX principal investigator Dave McComas of the Southwest Research Institute. Although the ribbon looks bright in the IBEX map, it does not glow in any conventional sense. The ribbon also has fine structure--small filaments of ENA emission no more than a few degrees wide: image. Stay tuned for updates.

Voyager Spacecraft Enters a Strange, Mysterious Region 11 Billion Miles from Earth --Upending Long-Standing Theories Launched 36 years ago, the Voyager 1 spacecraft speeds a rate of about a million miles a day entering a bizarre and mysterious region more than 11 billion miles from Earth that scientists are struggling to make sense of. It's a region where the fierce solar winds have all but vanished and pieces of atoms blasted across the galaxy by ancient supernovae drift into the solar system, the NASA probe is causing scientists to question some long-standing theories on the nature of our solar system and life beyond its cold dark edge dubbed the "magnetic highway" --a newly discovered area of the heliosphere, the vast bubble of magnetism that shields the solar system from deadly cosmic rays. Voyager 1 entered the edge of the solar wind in 2003, when the spacecraft’s instruments indicated that particles around it were moving subsonically, having slowed down after traveling far from the sun. "This is a new region that we didn't know existed," Krimigis says. Image credit: Southwest Research Institute

The Extinction Protocol: 2012 and beyond | 2012 and Earthchanges News events Titan’s Haze Could Hold Recipe for Life, No Water Needed | Wired Science When it comes to determining exactly where in the solar system life began, things have never been so up in the air. Scientists over the past decade have suggested deep-sea hydrothermal vents, underground aquifers, partially frozen lakes and even comets as locations for the origin of life. Now an experiment that simulates chemical reactions in the atmosphere of Titan, Saturn’s haze-shrouded moon, adds a new location to the list of unexpected places where life could have begun — in the sky. The study used radio waves as an energy source, simulating the action of ultraviolet radiation from the sun that strikes the top of Titan’s thick atmosphere and breaks apart molecules such as methane and molecular nitrogen. The experiment is the first to produce amino acids and the nucleotide bases that make up DNA and RNA — the basic ingredients of life — without the need for liquid water, says Sarah Hörst of the University of Arizona in Tucson. Image: NASA See Also:

First Images of Our Solar System's Tail Revealed | IBEX Heliotail Observations Astronomers have gotten the first-ever peek at our solar system's tail, called the heliotail, finding that it's shaped like a four-leaf clover, NASA scientists announced today (July 10). The discovery was made using NASA's Interstellar Boundary Explorer (IBEX), a coffee table-sized spacecraft that is studying the edge of the solar system. "Many models have suggested the heliotail might look like this or like that, but we have had no observations," David McComas, IBEX principal investigator at Southwest Research Institute in San Antonio, Tex., said in a statement. "We always drew pictures where the tail of the solar system just trailed off the page, since we couldn't even speculate about what it really looked like." [Images: NASA's IBEX Sees Our Solar System's Tail] The tail drags behind the bullet-shaped heliosphere, or the bubble surrounding our solar system that's created by the solar wind and solar magnetic field. The new findings are detailed in the Astrophysical Journal.

Astronomers Get First Peek at Atmosphere of a "Super-Earth" Exoplanet Someday in the coming years, if astronomers finally succeed in locating a virtual Earth twin outside the solar system—a tiny dot of a world at a temperate, life-enabling distance from a sunlike star—the achievement will hardly be cause for resting on observational laurels. Instead another race will begin: to characterize the planet and its atmosphere and to determine if the world is truly habitable or, tantalizingly, if it is already inhabited by some extraterrestrial life-form. In the meantime, astronomers are honing their techniques on the closest thing available—so-called super-Earths, just a few times the mass of our own planet, which are too hot to be habitable but are interesting in their own right. To that end, a team of researchers has managed to capture the light spectrum of a super-Earth backlit by its host star. "This is the most accessible way to study these planets' atmospheres," says lead study author Jacob Bean of the Harvard-Smithsonian Center for Astrophysics.

WebStars: Astrophysics in Cyberspace This list of astronomical resource sites is intended as a resource for users who have a general interest in astronomical topics. For a translation of any acronyms you may have seen in our pages check out our acronyms page. In the News Read the latest NASA news! The Solar System Planetary Exploration The Jet Propulsion Laboratory (JPL) has information on missions around the solar system: past, present, future, and proposed. The SOHO gallery SOHO (the Solar and Heliospheric Observatory) is a joint NASA/ESA mission to study the Sun during the quiet portion of the solar cycle. Project Galileo Galileo is a space probe to Jupiter, whose mission ended in September 2003. The Cassini Mission Cassini is a space probe to Saturn launched in October, 1997. New Horizons The Pluto-Kuiper Belt Mission will help us understand worlds at the edge of our solar system by making the first reconnaissance of Pluto and Charon ­ a "double planet" system and the last in our solar system to be visited by spacecraft. Mars

Earth has Ring Of Anti-Protons Want to stay on top of all the space news? Follow @universetoday on Twitter PAMELA team and detector in Rome before launch. Photo courtesy of the PAMELA Experiment When it comes to planets with rings, we know the answer: Jupiter, Saturn, Uranus, and Neptune. “The existence of a significant flux of antiprotons confined to Earth’s magnetosphere has been considered in several theoretical works.” says team leader, O. The PAMELA experiment – short for Payload for Antimatter Exploration and Light-nuclei Astrophysics – is based on an international collaboration involving about 100 physicists. “The satellite orbit (70 degree inclination and 350–610 km altitude) allows PAMELA to perform a very detailed measurement of the cosmic radiation in different regions of Earth’s magnetosphere, providing information about the nature and energy spectra of sub-cutoff particles.” says Adriani. From its subdetectors, PAMELA dished up a serving of antiprotons, but it wasn’t an easy job. About Tammy Plotner

Space Zen: Will Humans' Brains Change During Travel in Outer Space? -A Galaxy Insight In February, 1971, Apollo 14 astronaut Edgar Mitchell experienced the little understood phenomenon sometimes called the “Overview Effect”. He describes being completely engulfed by a profound sense of universal connectedness. Without warning, he says, a feeing of bliss, timelessness, and connectedness began to overwhelm him. He describes becoming instantly and profoundly aware that each of his constituent atoms were connected to the fragile planet he saw in the window and to every other atom in the Universe. He described experiencing an intense awareness that Earth, with its humans, other animal species, and systems were all one synergistic whole. He says the feeling that rushed over him was a sense of interconnected euphoria. Rusty Schweikart experienced it on March 6th 1969 during a spacewalk outside his Apollo 9 vehicle: “When you go around the Earth in an hour and a half, you begin to recognize that your identity is with that whole thing. This is done with Faraday cages.

Snow White: a Distant Icy World | Astronomy Astronomers at the California Institute of Technology (Caltech) have discovered that the dwarf planet 2007 OR10 — nicknamed Snow White — is an icy world, with about half its surface covered in water ice that once flowed from ancient, slush-spewing volcanoes. The new findings also suggest that the red-tinged dwarf planet may be covered in a thin layer of methane, the remnants of an atmosphere that’s slowly being lost into space. ‘You get to see this nice picture of what once was an active little world with water volcanoes and an atmosphere, and it’s now just frozen, dead, with an atmosphere that’s slowly slipping away,’ says Mike Brown, the Richard and Barbara Rosenberg Professor and professor of planetary astronomy, who is the lead author on a paper to be published in the Astrophysical Journal Letters describing the findings. An artist's conception of Snow White 2007 OR10 (NASA) As expected, Snow White was red.

LUNAR LIGHTS ON A HOLLOW MOON? Nevertheless, official NASA transcripts and blatant censorship of audio transmissions don't get any more ominous. Over the past year, I have discovered that there are many mysteries in which NASA and the moon share. I've already provided some evidence of NASA obscuring certain elements during the Apollo Missions (more below) - but were they already aware and prepared for spooky things being seen or heard on the moon before the Apollo missions were even launched? Strange lights and objects have been recorded on our moon for hundreds of years. The classical Greek philosopher, mathematician and scientist Plato also reported anomalous lights on the moon sometime around 400 BC. So could great historical minds like Sir William Herschel have been correct? There are several official NASA photos taken throughout it's lunar expeditions which often depict some extremely large, artificial-looking, structures on the lunar surface. In 1962, NASA scientist Dr. Indeed it was. How do I know this?

How Was the Solar System Formed? | What Created the Solar System | Life's Little Mysteries Scientists aren't completely sure how the solar system formed, but most agree the best explanation is that a cloud of molecules collapsed inward on itself, forming our solar system about 4.6 billion years ago. In this description, called the nebular model, our sun coalesced first, surrounded by a spinning disk of gas and dust. How the sun formed Some evidence, such as a 2010 study from scientists at the Carnegie institution, suggests this contraction could have been spurred by a burst from nearby supernovas . Initially, gas collected in the dense center of this spinning disk, creating a protosun. How the planets formed Meanwhile, in the disk of material around the young sun, a process called accretion formed the planets, moons, comets and asteroids. In the hot area near the evolving Sun , water on the planetesimals tended to evaporate away, gasses were swept outward and only heavier material, like silicon and metals could condense into solids. The other objects in the solar system

Meteorite older than Solar System Organic globules found in the Tagish Lake meteorite fragments may predate the solar system, according to a new U.S. study Credit: University of Calgary SYDNEY: A meteorite discovered in Canada may be older than the Solar System, according to a new U.S. study. Samples taken from the Tagish Lake meteorite, discovered in 2000, have revealed evidence of organic matter that predates our Sun and Solar System, according to the study, published in today’s edition of the U.S. journal Science. According to the researchers, the meteorite most likely originated at the outer regions of the Kuiper Belt or in the cold molecular cloud that gave birth to the Solar System. When analysing the meteorite, the team, led by Keiko Nakamura-Messenger, of the NASA/Johnson Space Center in Texas, discovered “globules” inside it consisting of simple organic compounds with carbon-rich outer layers. The isotopic ratios showed that the globules formed at temperatures of about minus 260°C – close to absolute zero.