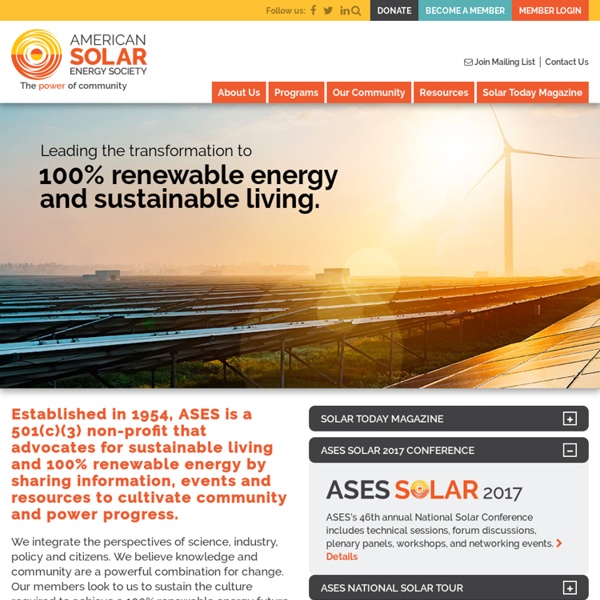 Solar Power Information and Facts Solar energy is the technology used to harness the sun's energy and make it useable. As of 2011, the technology produced less than one tenth of one percent of global energy demand. Many are familiar with so-called photovoltaic cells, or solar panels, found on things like spacecraft, rooftops, and handheld calculators. On a much larger scale, solar-thermal power plants employ various techniques to concentrate the sun's energy as a heat source. How to Harness Solar Power In one technique, long troughs of U-shaped mirrors focus sunlight on a pipe of oil that runs through the middle. Other solar technologies are passive. Solar energy is lauded as an inexhaustible fuel source that is pollution- and often noise-free. Pitfalls Solar energy doesn't work at night without a storage device such as a battery, and cloudy weather can make the technology unreliable during the day.

Solar Energy Basics | NREL Solar is the Latin word for sun—a powerful source of energy that can be used to heat, cool, and light our homes and businesses. That's because more energy from the sun falls on the earth in one hour than is used by everyone in the world in one year. A variety of technologies convert sunlight to usable energy for buildings. The most commonly used solar technologies for homes and businesses are solar water heating, passive solar design for space heating and cooling, and solar photovoltaics for electricity. Solar panels installed on a home in Colorado. Businesses and industry also use these technologies to diversify their energy sources, improve efficiency, and save money. Solar Photovoltaic Technology These technologies convert sunlight directly into electricity to power homes and businesses. Concentrating Solar Power These technologies harness heat from the sun to provide electricity for large power stations. Solar Process Heat Passive Solar Technology From the U.S. Solar Water Heating U.S.

New water-cooling solar panels could lower the cost of air conditioning by 20% | Science | AAAS Most of us have heard of solar water heaters. Now there’s a solar water cooler, and the technology may sharply lower the cost of industrial-scale air conditioning and refrigeration. The new water coolers are panels that sit atop a roof, and they’re made of three components. The first is a plastic layer topped with a silver coating that reflects nearly all incoming sunlight, keeping the panel from heating up in the summer sun. Researchers at Stanford University in Palo Alto, California, recently placed three water cooling panels—each 0.37 square meters—atop a building on campus and circulated water through them at a rate of 0.2 liters every minute. “It’s an excellent paper,” says Ronggui Yang, a mechanical engineer at the University of Colorado in Boulder, who earlier this year reported the development of a plastic film that cools everything it touches up to 10°C.

Solar panels could destroy U.S. utilities, according to U.S. utilities Solar power and other distributed renewable energy technologies could lay waste to U.S. power utilities and burn the utility business model, which has remained virtually unchanged for a century, to the ground. That is not wild-eyed hippie talk. It is the assessment of the utilities themselves. Back in January, the Edison Electric Institute — the (typically stodgy and backward-looking) trade group of U.S. investor-owned utilities — released a report [PDF] that, as far as I can tell, went almost entirely without notice in the press. I’ve been thinking about how to convey to you, normal people with healthy social lives and no time to ponder the byzantine nature of the power industry, just what a big deal the coming changes are. So, just a bit of background. This complexity makes it difficult to generalize about utilities … or to discuss them without putting people to sleep. Thrilling, I know. It’s worse than that, though. But wait. Indeed! That’s how it starts. Did you follow that?

Solar Grew Faster Than All Other Forms of Power for the First Time - Bloomberg Solar power grew faster than any other source of fuel for the first time in 2016, the International Energy Agency said in a report suggesting the technology will dominate renewables in the years ahead. The institution established after the first major oil crisis in 1973 said 165 gigawatts of renewables were completed last year, which was two-thirds of the net expansion in electricity supply. Solar powered by photovoltaics, or PVs, grew by 50 percent, with almost half of new plants built in China. “What we are witnessing is the birth of a new era in solar PV,” Fatih Birol, executive director of the IEA, said in a statement accompanying the report published on Wednesday in Paris. “We expect that solar PV capacity growth will be higher than any other renewable technology through 2022.” This marks the sixth consecutive year that clean energy has set records for installations. “The solar PV story is a Chinese story,” said Paolo Frankl, head of the IEA’s renewable energy division.

In 2016, renewable sources grew more than ever  news, commentary and  Solar power could lay waste to US utilities New solar water cooler that could lower the costs of... TED talks on the topic of solar energy: Air-conditioning...