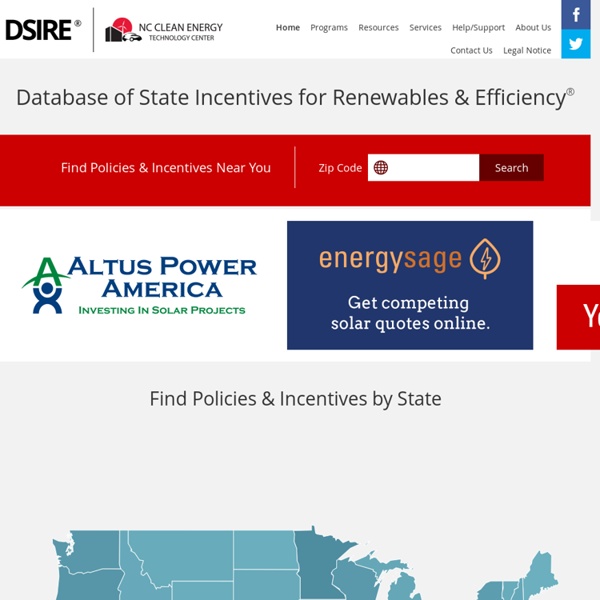 Disclaimer: The information presented on the DSIRE web site provides an unofficial overview of financial incentives and other policies. It does not constitute professional tax advice or other professional financial guidance, and it should not be used as the only source of information when making purchasing decisions, investment decisions or tax decisions, or when executing other binding agreements. Please refer to the individual contact provided below each summary to verify that a specific financial incentive or other policy applies to your project. While the DSIRE staff strives to provide the best information possible, the DSIRE staff, the N.C. Solar Center, N.C. State University and the Interstate Renewable Energy Council, Inc. make no representations or warranties, either express or implied, concerning the accuracy, completeness, reliability or suitability of the information.

His energy bill is $0.00 - CSMonitor.com EAST AMWELL, N.J. — Mike Strizki lives in the nation's first solar-hydrogen house. The technology this civil engineer has been able to string together – solar panels, a hydrogen fuel cell, storage tanks, and a piece of equipment called an electrolyzer – provides electricity to his home year-round, even on the cloudiest of winter days. Mr. Strizki's monthly utility bill is zero – he's off the power grid – and his system creates no carbon-dioxide emissions. Neither does the fuel-cell car parked in his garage, which runs off the hydrogen his system creates.

Access and Benefit-Sharing (ABS) — DIVERSITAS The Nagoya Protocol on Access and Benefit-sharing The Convention on Biological Diversity (CBD) adopted the Nagoya Protocol at its tenth meeting on 29 October 2010 in Nagoya, Japan. The Nagoya Protocol on Access to Genetic Resources and the Fair and Equitable Sharing of Benefits Arising from their Utilization of the Convention on Biological Diversity (in short, Access and Benefit-sharing-ABS) aims at regulating the access to genetic resources and the fair and equitable sharing of benefits derived from their utilisation. MANDATORY RENEWABLE ENERGY – THE ENERGY EVOLUTION In order to insure energy and economic independence as well as better economic growth without being blackmailed by foreign countries, our country, the United States of America’s Utilization of Energy sources must change. Our continued dependence on fossil fuels could and will lead to catastrophic consequences. The federal, state and local government should implement a mandatory renewable energy installation program for residential and commercial property on new construction and remodeling projects with the use of energy efficient material, mechanical systems, appliances, lighting, etc. The source of energy must by renewable energy such as Solar-Photovoltaic, Geothermal, Wind, Biofuels, etc. including utilizing water from lakes, rivers and oceans to circulate in cooling towers to produce air conditioning and the utilization of proper landscaping to reduce energy consumption. The implementation could be done on a gradual scale over the next 10 years.

Science On a Sphere SOS Explorer™ uses the NOAA-developed Terraviz™ visualization engine to create an interactive Earth for a flat screen display including those projected on walls, computers, and large displays, providing teachers, students, and the public access to a library of selected Science On a Sphere® datasets and movies. The visualizations show information provided by satellites, ground observations and computer models and rapidly animate through real-time global data. In addition, tools included in the application allow users to zoom into, probe, and graph the data, as well as add supplementary material including websites, videos, pictures, and placemarks.

Adding Up Renewable Energy: Do The Benefits Of Renewable Energy Do the overall efficiencies of renewable energy sources, such as wind, solar, and geothermal add up in terms of their complete life cycle from materials sourcing, manufacture, running, and decommissioning" Researchers in Greece have carried out a life cycle assessment to find the answer. Increasing energy consumption and a growing world population implies shrinking reserves of fossil fuels. While the use of fossil fuels brings with it the problem of carbon dioxide emissions and climate change. Our continued dependence on fossil fuels coupled with the pressing global issue of climate change has pushed the concept of renewable energy sources to the top of the agenda. In looking for alternative energy supplies, there is more to simply adding up the outputs, according to Christopher Koroneos and Yanni Koroneos of the Laboratory of Heat Transfer and Environmental Engineering, at the Aristotle University of Thessaloniki, Greece.

Ecosystem Services - TEEB This tables presents the different categories of ecosytem services that ecosystems provide. Provisioning Services are ecosystem services that describe the material or energy outputs from ecosystems. They include food, water and other resources. Food: Ecosystems provide the conditions for growing food. Food comes principally from managed agro-ecosystems but marine and freshwater systems or forests also provide food for human consumption. Denmark, Texas swap their wind and oil knowledge LUNDERSKOV, DENMARK — The tiny country of Denmark is emerging as a model for Texas in the booming field of wind energy, just as Texas has been for Denmark in the traditional energy businesses of oil and gas. Denmark has become a world leader in wind power, generating nearly 25 percent of the county's electricity needs, while Texas has vaulted past California to become the top wind energy state, with nearly a quarter of U.S. generating capacity. "In so many ways, we are modeling our wind energy industry on Denmark's wind energy industry," said Michelle Warren, the deputy commissioner overseeing renewable energy at the Texas General Land Office in Austin. For example, Texas — like Denmark — has adopted a government requirement for wind energy.

Alternative job source W Alternative job source - When 1,800 workers lost their jobs after a Maytag appliance factory and headquarters closed last year in the small town of Newton, Iowa, a company that makes wind-turbine blades saw an opportunity -- an available, skilled work force in the middle of one of America's hardiest wind-energy production regions. TPI Composites Inc. is building a new plant there as the energy industry strives for a cleaner, more sustainable future. With proper incentives, thousands of green-collar jobs could be created, from ethanol production to wind turbines and solar panels, and all the maintenance and construction to support them, industry officials said.

New England Takes Aim at Talent Shortage It’s no secret that there’s a talent shortage in the greentech industry. After all, the industry had remained small for years, supporting only a handful of successful entrepreneurs. Now that the market is booming and the venture capital is flowing, industry insiders say a lack of executives experienced in the industry is creating a bottleneck. For proof, just take a look at job boards. SustainableBusiness.com’s Green Dream Jobs listed 41 green-energy jobs posted just since the beginning of the month, for example. Oil And Resources: Change You Won't Believe The peak oil story has not been nullified by the scramble to unload every asset for cash — including whomping gobs of oil contracts — during this desperate season of bank liquidation. The main implication of the peak oil story is that we won’t be able to generate the kind of economic growth that defined our way of life for decades because the primary energy resources needed for it will be contracting. Just as global oil production peaked, our economy evolved into a morbid hypertrophy, and the chief manifestation of it was the suburban sprawl-building fiesta that has now climaxed in the real estate bust. By the early 21st century, when so much American manufacturing had been swapped out to Asia, there was no business left except sprawl-building — a manifold tragedy which wrecked the banks that financed it, and left the ordinary people mortgaged to it with ruinous liabilities. That economy is now in its death throes.

A Japanese Town That Kicked the Oil Habit Shin Abe doesn't find it odd that the picturesque little Japanese town of Kuzumaki, where he has lived all his life, generates some of its electricity with cow dung. Nor is the 15-year-old middle school student blown away by the vista of a dozen wind turbines spinning atop the forested peak of nearby Mt. Kamisodegawa.