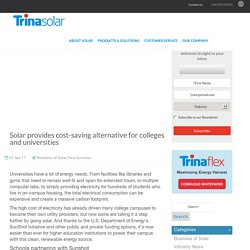 From facilities like libraries and gyms that need to remain well-lit and open for extended hours, to multiple computer labs, to simply providing electricity for hundreds of students who live in on-campus housing, the total electrical consumption can be expensive and create a massive carbon footprint. The high cost of electricity has already driven many college campuses to become their own utility providers, but now some are taking it a step further by going solar. And thanks to the U.S. Department of Energy's SunShot Initiative and other public and private funding options, it's now easier than ever for higher education institutions to power their campus with this clean, renewable energy source. Schools partnering with Sunshot The SunShot Initiative's Solar Market Pathways program delivers funding and awards to projects that are advancing solar deployment across the United States at the commercial, residential and utility-scale.

Cultivating the coexistence of agriculture and solar farms. By now, most Americans have heard of solar farms. 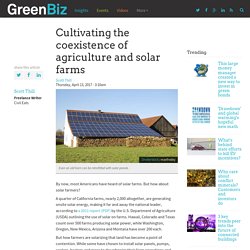 But how about solar farmers? A quarter of California farms, nearly 2,000 altogether, are generating onsite solar energy, making it far and away the national leader, according to a 2011 report (PDF) by the U.S. Department of Agriculture (USDA) outlining the use of solar on farms. Hawaii, Colorado and Texas count over 500 farms producing solar power, while Washington, Oregon, New Mexico, Arizona and Montana have over 200 each. But how farmers are solarizing that land has become a point of contention. Last year marked U.S. solar’s biggest boom, and the trend will increase as renewable energy, especially solar power, is more thoroughly incorporated into America’s 900-million-acre (PDF) agricultural economy. Since 2010, the cost of installing solar on homes and businesses has plummeted by more than 50 percent (PDF). Today, agricultural operations across the country are using solar to offset their costs in a variety of ways.

How to strengthen the ROI of utility-scale solar. Solar power generation is growing rapidly in the U.S. 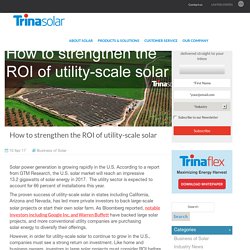 According to a report from GTM Research, the U.S. solar market will reach an impressive 13.2 gigawatts of solar energy in 2017. The utility sector is expected to account for 66 percent of installations this year. The proven success of utility-scale solar in states including California, Arizona and Nevada, has led more private investors to back large-scale solar projects or start their own solar farm. As Bloomberg reported, notable investors including Google Inc. and Warren Buffett have backed large solar projects, and more conventional utility companies are purchasing solar energy to diversify their offerings. However, in order for utility-scale solar to continue to grow in the U.S., companies must see a strong return on investment. Cost control important for lenders As Solar Industry magazine reported, the U.S. "Developers prove their projects make economic sense by demonstrating strong energy yields and low costs. 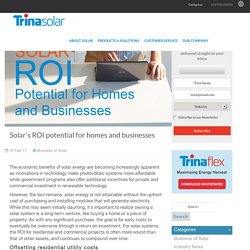 However, the fact remains, solar energy is not attainable without the upfront cost of purchasing and installing modules that will generate electricity. While this may seem initially daunting, it's important to realize owning a solar system is a long-term venture, like buying a home or a piece of property. As with any significant purchase, the goal is for early costs to eventually be overcome through a return on investment. Trina Solar, Trina Solar Limited, NYSE:TSL, International Solar PV Manufacture, global Photovoltaic Solar Cell industry, Trina Vertically Integrated, Trina Solar Photovoltaic Cell, Trina Solar Photovoltaic Ingot, Trina Monocrystalline Module, Trina Multic.

The solar power procurement journey. Solar power is all the rage nowadays and many government agencies and other public sector entities are scrambling to find out how they too can cut energy costs, reduce emissions and contribute to building a more sustainable planet. 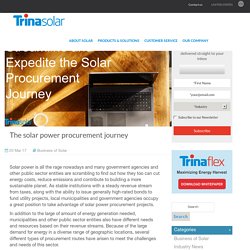 As stable institutions with a steady revenue stream from taxes, along with the ability to issue generally high-rated bonds to fund utility projects, local municipalities and government agencies occupy a great position to take advantage of solar power procurement projects. In addition to the large of amount of energy generation needed, municipalities and other public sector entities also have different needs and resources based on their revenue streams.

Because of the large demand for energy in a diverse range of geographic locations, several different types of procurement routes have arisen to meet the challenges and needs of this sector. The NREL identified some key steps that can help streamline and expedite the journey through solar energy procurement: Untitled. Untitled. How the national solar business code benefits companies and consumers. Although solar power provides end users with the freedom to generate a clean, renewable source of energy from their own property, there are some guidelines and rules that must be followed. 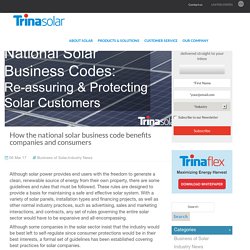 These rules are designed to provide a basis for maintaining a safe and effective solar system. With a variety of solar panels, installation types and financing projects, as well as other normal industry practices, such as advertising, sales and marketing interactions, and contracts, any set of rules governing the entire solar sector would have to be expansive and all-encompassing. Although some companies in the solar sector insist that the industry would be best left to self-regulate since consumer protections would be in their best interests, a formal set of guidelines has been established covering best practices for solar companies.

The SEIA's Solar Business Code "We are leading by example," Resch said. The SEIA's codes cover a wide range of issues surrounding the sale of solar products to consumers. Trinasolar [trinasolar] on Plurk. Trinasolar. Solar Panels and Solar Suppliers.