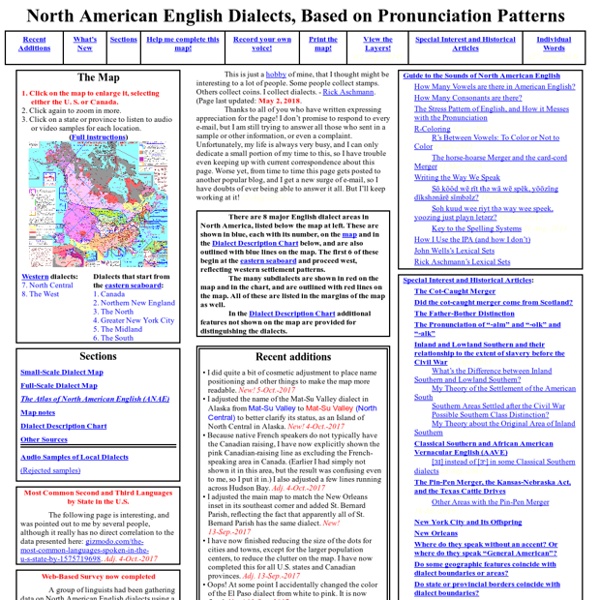 The Cambridge Online Survey of World Englishes We want to document the range of variation in World Englishes. The map below shows an example of what we are interested in. Do you say pop or soda? pop (39%) soda (37%) coke (18%) soft drink (1%) Would you like to submit your own answers? A whole nother language Lauren Collins, the New Yorker writer who profiled Benjamin Creme in the Nov. 29 issue, described the London-based spiritual leader as — among other things — “ruddy-complected.” I’ve grown accustomed to seeing the occasional typo, as well as the occasional F-word, in the magazine, but complected — that was a bit of a shock. Wasn’t that a word to avoid in polite company, hardly better bred than irregardless and ain’t? Complected, our teachers told us, was a misbegotten monster.

How Far Back in Time Could a Modern English Speaker Go and Still Communicate? Past Is Prologue The transition from Old English to Modern English was a process, not an event Changes in language don’t occur overnight, though slang terms come in and out of use relatively quickly and new words are invented while others fall into disuse. The rules of grammar you learned in school are the same ones your parents were taught and what your own kids will (or do) use. A few new words are tossed in the mix every few years to keep things interesting (remember the uproar when “ain’t” was added to the dictionary?). The transition from Old English to Middle English to Modern English was a process rather than an event — the rules didn’t all suddenly change on May 24, 1503.

Words in English A Brief History of English, with Chronologyby Suzanne Kemmer © 2001-2005 Pre-English | Old English | Middle English | Modern English The language we call English was first brought to the north sea coasts of England in the 5th and 6th centuries A.D., by seafaring people from Denmark and the northwestern coasts of present-day Germany and the Netherlands. These immigrants spoke a cluster of related dialects falling within the Germanic branch of the Indo-European language family. Their language began to develop its own distinctive features in isolation from the continental Germanic languages, and by 600 A.D. had developed into what we call Old English or Anglo-Saxon, covering the territory of most of modern England. New waves of Germanic invaders and settlers came from Norway and Denmark starting in the late 8th century.

When Did Americans Lose Their British Accents? The Fourth of July is the epitome of summer—and after several months spent indoors, you need some outdoor fun more than anything. Check out these 15 summer must-haves while they’re on sale and save an extra 15 percent when you spend $50 or more with the code JULYFOURTH15. 1. CARSULE Pop-Up Cabin for Your Car; $300 (20 percent off) This tent connects to your hatchback car like a tailgate mobile living room. The installation takes just a few minutes and the entire thing stands 6.5 feet tall so you can enjoy the outdoors from the comfort of your car.

Just Deserts Claim: A person who gets what he deserves is said to have received his "just desserts." Example:[Collected via e-mail, December 2009] In your Fair Shake article, which was the New Urban Legend earlier this week, you have a link to other legends that include a thief or other wrong-doer getting a proper comeuppance. Unfortunately, the link is title "just deserts", and while some of the tales may indeed take place in the Mojave or the Sahara, you probably intended to link to legends involving "just desserts"; that second S makes all the difference. How the English Failed to Stamp Out the Scots Language Over the past few decades, as efforts to save endangered languages have become governmental policy in the Netherlands (Frisian), Slovakia (Rusyn) and New Zealand (Maori), among many others, Scotland is in an unusual situation. A language known as Scottish Gaelic has become the figurehead for minority languages in Scotland. This is sensible; it is a very old and very distinctive language (it has three distinct r sounds!), and in 2011 the national census determined that fewer than 60,000 people speak it, making it a worthy target for preservation.

Where do people say that? An interactive word map of the 100,000 most common words in America — Quartz When Amazon first premiered its dystopian sci-fi thriller The Man in the High Castle—a TV show about a world in which the US lost World War II and is ruled by both the Nazis and the Japanese—the show truly felt like an alternate universe. In our world, it was 2015, same-sex marriage had just been ruled legal, the US had a progressive black president, and neo-Nazism was the farthest thing from most Americans’ minds. The show’s second season debuts today in a drastically different political environment. The alternate reality manifested in the show doesn’t seem so far off when churches in California are being vandalized with swastikas, the “alt-right” movement has legitimized white-nationalism, and people feel comfortable enough to gather in Washington, DC to give Nazi salutes and shout: “Hail Trump, hail our people, hail victory!”