A Fistful of Euros 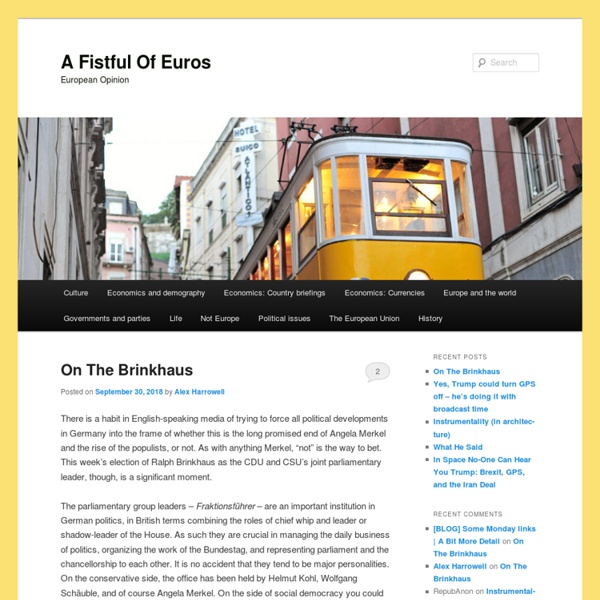 OK, so what do EU chief diplomat Catherine Ashton, US assistant secretary of state Victoria Nuland, Estonian foreign minister Urmas Paet, Russian ambassador to Eritrea Sergei Bakharev, and his colleague in Zimbabwe Igor Chubarev all have in common? They’ve all had their mobile phone calls intercepted and leaked onto the web. The first three, well, Russia, obviously. The bizarrely distant ambassadors are presumably a gesture by the US to demonstrate the reach of the NSA. At least that is what you might have said a few years ago. But we live in an age of intelligence proliferation today.

521 - Cartography’s Favourite Map Monster: the Land Octopus by Frank Jacobs Over the centuries, the high seas have served as a blank canvas for cartographers’ worst nightmares. They have dotted the oceans with a whole crypto-zoo of island-sized whales, deathly seductive mermaids, giant sea serpents, and many more - a whole panoply of heraldic horrors. As varied as this marine bestiary is, mapmakers have settled on a single, favourite species for land-based beastliness: the octopus.

David Miliband The British General Election is being called today. While it is going on I cannot post blogs for the Foreign Office website. So for now, thank you for all your comments. I hope we'll continue the conversation soon! Censoring on one end, "outliers" on the other, what can we do with the middle? - Statistical Modeling, Causal Inference, and Social Science This post was written by Phil. A medical company is testing a cancer drug. They get a 16 genetically identical (or nearly identical) rats that all have the same kind of tumor, give 8 of them the drug and leave 8 untreated…or maybe they give them a placebo, I don’t know; is there a placebo effect in rats?. Matthew Yglesias » Sympathy for Gordon Brown By Matthew Yglesias on May 4, 2010 at 10:43 am "Sympathy for Gordon Brown" It appears almost certain that Gordon Brown will lead the Labour Party to a historically bad result in the upcoming election. It’s possible that Labour will stay in government in coalition with the Liberal Democrats, but that will almost certainly require Brown’s resignation as leader. Under the circumstances, it’s worth pointing out that whatever Brown’s flaws and despite the very real problems with the Labour government (Iraq, e.g.) he’s largely being punished for an economic crisis he didn’t cause, couldn’t have stopped, and has actually handled quite well. The global financial meltdown was not unique to Britain and the United Kingdom’s status as a country that’s unusually exposed to the ups-and-downs of the financial industry is extremely longstanding.

Who suffers the most? Europe’s austerity misery, ranked - Quartz Huge crowds took to the streets in Rome this past weekend to protest a tough new budget presented by the prime minister. Similar scenes played out in central Lisbon. As the combination of spending cuts, wage freezes and tax hikes across Europe continues to bite, austerity fatigue has become deeply entrenched, regularly boiling over in protests and strikes. New data (pdf) on European governments’ finances gives some context on the scale and scope of austerity in the region. The Duck of Minerva Dear all, I'm currently the program chair for ISA Midwest 2014. The conference will take place from November 7th to 9th at the Hilton Ballpark in St.

UK to continue aid to India, terminates aid to 16 other nations London, Feb.28: Britain will continue providing financial aid to India, but will cut off aid to sixteen other nations, following a review, that proves they are no longer in the poverty bracket. Following an inquiry ordered by International Development Secretary Andrew Mitchell, countries such as Russia, China, Vietnam, Cambodia, Moldova and Serbia will not be provided financial aid by UK, the Daily Mail reports. The UK however, has decided to continue providing 280 million pounds to India. The Nature and the Origin of the Subprime Mortgage Crisis There has been a long term American policy of promoting home ownership. This entailed making the financing of home purchases as easy as possible. Various financial institutions were set up over time to make the securing of a mortgage quick and convenient. There once were Savings and Loan Associations that were savings institutions which could only invest in home mortgages.

Reading Politics · Intervention and Prudence Patrick Porter Finally after a busy teaching term I’ve got a chance to add some thoughts to the great post and articles by Jon Western and Joshua Goldstein on humanitarian intervention. Bottom line: I think Jon and Joshua make a robust case that not only can intervention work, but that the international community is learning effectively how to go about it. As they argue, it is a technique of statecraft that is being refined and better understood. It might not necessarily transform societies on every metric of human well being, but prompt military action combined with due attention to the rule of law, security and institutions can fend off predators and give oppressed peoples a chance – a breathing space - to rebuild. East Timor, Sierra Leone, and who knows, maybe even Libya testify to this.

UK ready for Syria evacuation. Are we? A report emerged this week (thanks Sam) that the UK is gearing up for a possible mass evacuation of British citizens from Syria , with a helicopter carrier and amphibious assault ship to be deployed to the Eastern Mediterranean for exercises after the Olympic Games finish. The exercise has evidently been planned for some time and isn't a direct response to events in Syria, but according to the UK Telegraph, the flotilla could be used to evacuate British citizens from the Middle East if needed. The French will join the exercise too, with an aircraft carrier, escort ships and a strike force of Rafale fighters. The Misallocation Of Credit In Japan "The evergreening of bank loans for 'cosmetic purposes' was widespread, with banks more likely to increase loans to firms with weaker financial health." In Unnatural Selection: Perverse Incentives and the Misallocation of Credit in Japan (NBER Working Paper No. 9643, commissioned for an NBER Project on Japan and originally presented at a conference in Tokyo), co-authors Joe Peek and Eric Rosengren investigate what they consider an important factor in the long-running economic stagnation in Japan: Japanese banks' practice of continually extending credit to very weak or even insolvent firms. The authors maintain that in Japan's bank-centered economy, where banks often have responsibility for corporate monitoring and governance, many lending decisions are strongly influenced by a perceived duty to support troubled firms, rather than by the sort of credit-risk analysis practiced in the United States.