Mass Incarceration in the United States 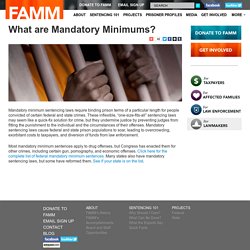 These inflexible, “one-size-fits-all” sentencing laws may seem like a quick-fix solution for crime, but they undermine justice by preventing judges from fitting the punishment to the individual and the circumstances of their offenses. Mandatory sentencing laws cause federal and state prison populations to soar, leading to overcrowding, exorbitant costs to taxpayers, and diversion of funds from law enforcement. Most mandatory minimum sentences apply to drug offenses, but Congress has enacted them for other crimes, including certain gun, pornography, and economic offenses. 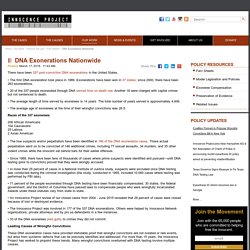 Exonerations have been won in 37 states; since 2000, there have been 263 exonerations. • 20 of the 337 people exonerated through DNA served time on death row. Another 16 were charged with capital crimes but not sentenced to death. • The average length of time served by exonerees is 14 years. . • The average age of exonerees at the time of their wrongful convictions was 26.5. Races of the 337 exonerees: 206 African Americans104 Caucasians25 Latinos2 Asian American • The true suspects and/or perpetrators have been identified in 166 of the DNA exoneration cases. . • Since 1989, there have been tens of thousands of cases where prime suspects were identified and pursued—until DNA testing (prior to conviction) proved that they were wrongly accused. • The Innocence Project was involved in 177 of the 337 DNA exonerations. Leading Causes of Wrongful Convictions. Racial profiling in L.A.: the numbers don't lie - latimes.

On monday, the ACLU of Southern California released a report analyzing more than 700,000 cases in which Los Angeles Police Department officers stopped pedestrians and/or drivers of motor vehicles between July 2003 and June 2004. 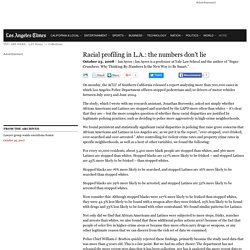 The study, which I wrote with my research assistant, Jonathan Borowsky, asked not simply whether African Americans and Latinos are stopped and searched by the LAPD more often than whites -- it's clear that they are -- but the more complex question of whether these racial disparities are justified by legitimate policing practices, such as deciding to police more aggressively in high-crime neighborhoods. We found persistent and statistically significant racial disparities in policing that raise grave concerns that African Americans and Latinos in Los Angeles are, as we put it in the report, "over-stopped, over-frisked, over-searched and over-arrested.

" Police Chief William J. Everyone does drugs, but only minorities are punished for it. Since its inception, the war on drugs has disproportionately affected minority Americans far more than white Americans. 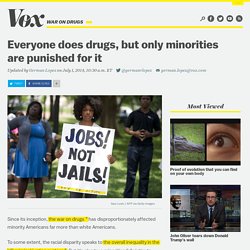 To some extent, the racial disparity speaks to the overall inequality in the US criminal justice system. But it's also true minorities fall victim to tactics specifically deployed in the war on drugs much more often than white people. Here are four essential facts to understanding how, exactly, the war on drugs disproportionately hurts minorities. 1) Black and white populations use drugs at similar rates White and black people report using drugs at similar rates, according to the latest data from the Substance Abuse and Mental Health Services Administration. These statistics underline why critics decry the war on drugs as racist. Human Rights Watch found more than four in five arrests in the war on drugs are for mere possession, while the rest are for sales. 2) Once convicted, black drug offenders get longer sentences than white drug offenders Further reading.

Wide Racial Divide in Sentencing. The Race Factor in Trying Juveniles as Adults. Americans have accepted that juveniles are different from adults. 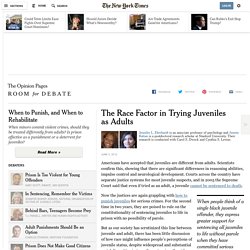 Scientists confirm this, showing that there are significant differences in reasoning abilities, impulse control and neurological development. Courts across the country have separate justice systems for most juvenile suspects, and in 2005 the Supreme Court said that even if tried as an adult, a juvenile cannot be sentenced to death. When people think of a single black juvenile offender, they express greater support for sentencing all juveniles to life without parole when they have committed serious violent crimes. Now the justices are again grappling with how to punish juveniles for serious crimes. For the second time in two years, they are poised to rule on the constitutionality of sentencing juveniles to life in prison with no possibility of parole.

In our own work, we find that race can have a sweeping effect even when people consider the same crime. Thus, race has the power to dampen our desire to be merciful. Breaking Down Mass Incarceration in the 2010 Census.