Thousands of women await day in court against J&J. Maggie Bednarz longed to join the people planning to picket outside Johnson & Johnson's annual shareholders meeting in New Brunswick today, but knew it would be impossible. 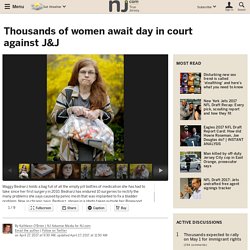 "I could never go," she said in disappointment. "I can't stand up that long. " Bednarz is one of nearly 55,000 women suing the pharmaceutical giant over the transvaginal surgical mesh implants it sold to help fix bladder leakage or bulges in pelvic organs. Those lawsuits claim that the mesh shrank, broke into pieces, moved about internally or adhered to bone - making it nearly impossible to remove. In New Jersey alone, the lawsuits number in the thousands, the list of the women's names running to 181 pages. They're part of one of the largest mass medical injury cases in the country - one that has lumbered along through the courts for years, with no clear end in sight. Johnson & Johnson shareholders: are you listening? Divest or be complicit!

UPDATED:APR 28 2017 03:09PM EDT FiDA Highlight PHILADELPHIA, PA (WTXF) - On Friday, April 28, a jury handed down a $20 million verdict against Johnson & Johnson for injuries suffered by a New Jersey woman after being implanted with a vaginal mesh device. 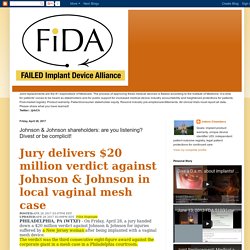 The verdict was the third consecutive eight-figure award against the corporate giant in a mesh case in a Philadelphia courtroom. Inova Specialist Treats Debilitating Transvaginal Mesh Complications. Abbas Shobeiri, MD, is board certified in obstetrics & gynecology and female pelvic medicine & reconstructive surgery (urogynecology). 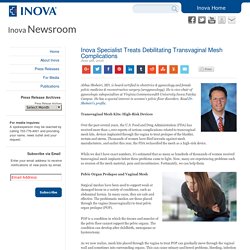 He is vice-chair of gynecologic subspecialties at Virginia Commonwealth University Inova Fairfax Campus. He has a special interest in women’s pelvic floor disorders.  Links to Medical  Mesh  Research - Links to Medical Mesh Research.

Killing My CAREER. Truth in medicine. Mesh Me Not. Mesh Troubles. Mesh Warrior Foundation. Drugwatch. Complications arise from mesh used in pelvic surgeries. A synthetic mesh commonly used to treat a form of urinary incontinence as well as the weakening of the female pelvis’s walls can lead to complications that increase in frequency with the amount of mesh used, new Weill Cornell Medicine research suggests. 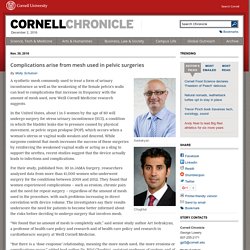 In the United States, about 1 in 5 women by the age of 80 will undergo surgery for stress urinary incontinence (SUI), a condition in which the bladder leaks due to pressure caused by physical movement, or pelvic organ prolapse (POP), which occurs when a woman’s uterus or vaginal walls weaken and descend. While surgeons contend that mesh increases the success of these surgeries by reinforcing the weakened vaginal walls or acting as a sling to support the urethra, recent studies suggest that the device actually leads to infections and complications.

For their study, published Nov. 30 in JAMA Surgery, researchers analyzed data from more than 41,000 women who underwent surgery for the conditions between 2008 and 2012. Johnson & Johnson misrepresented vaginal mesh with brutal side effects, WA says. Dawna Hankins had a partial hysterectomy in 2008. 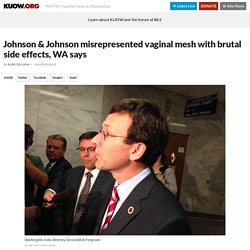 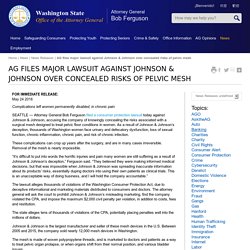 As a result of Johnson & Johnson’s deception, thousands of Washington women face urinary and defecatory dysfunction, loss of sexual function, chronic inflammation, chronic pain, and risk of chronic infection. These complications can crop up years after the surgery, and are in many cases irreversible. Removal of the mesh is nearly impossible. “It’s difficult to put into words the horrific injuries and pain many women are still suffering as a result of Johnson & Johnson’s deception,” Ferguson said. The lawsuit alleges thousands of violations of the Washington Consumer Protection Act, due to deceptive informational and marketing materials distributed to consumers and doctors. Contact: Johnson and Johnson Accused of False Advertising in Lawsuit... SAN DIEGO, CA: California Attorney General Kamala Harris filed a lawsuit in San Diego Superior Court Tuesday against Johnson & Johnson, alleging false advertising and deceptive marketing of its surgical mesh products for women. 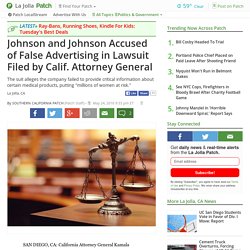 The complaint alleges that Johnson & Johnson neglected to inform both patients and doctors of possible severe complications and misrepresented the frequency and severity of risks. California co-led a multi-state investigation, involving 46 states and the District of Columbia, into Johnson & Johnson's surgical mesh products for women, and is seeking injunctive relief and monetary penalties. Johnson & Johnson, based in New Jersey, called the lawsuit "unjustified" and denied any inappropriate activity in the marketing of the products. "The use of implantable mesh is often the preferred option to treat certain female pelvic conditions, including pelvic organ prolapse and stress urinary incontinence, and is backed by years of clinical research," according to the company. 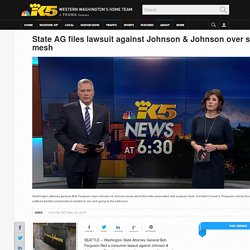 Ferguson says thousands of Washington women face urinary and defecatory dysfunction, loss of sexual function, chronic inflammation, chronic pain, and risk of chronic infection. “It’s difficult to put into words the horrific injuries and pain many women are still suffering as a result of Johnson & Johnson’s deception,” Ferguson said. “They believed they were making informed medical decisions, but that was impossible when Johnson & Johnson was spreading inaccurate information about its products’ risks, essentially duping doctors into using their own patients as clinical trials.

This is an unacceptable way of doing business, and I will hold the company accountable.” SurvivingMESH.org. MedicalExposure.com - The Medical Awareness Headquarters - Your free guide to information & resources regarding hazardous drugs and medical devices. FDA Hands Huge Gift To Big Pharma. 5 Things You Didn't Know About Mesh. 1) Serious, often painful complications are not uncommon Complications can range from severe unremitting pain to a “hole”, fistula, in the bladder or vagina. 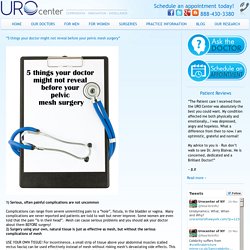 Many complications are never reported and patients are told to wait but never improve. Some women are even told that the pain “is in their head”. Mesh can cause serious problems and you should ask your doctor about them BEFORE surgery! 2) Surgery using your own, natural tissue is just as effective as mesh, but without the serious complications of mesh USE YOUR OWN TISSUE! 3) It is very difficult to remove all the mesh from your body and there are many serious complications from the removal surgery. When a Corporation Is 'Too Big to Care' About Breaking the Law  In many ways, the new Huffington Post/Highline "DocuSerial" focusing on the unlawful conduct of drug giant Johnson & Johnson, comes as little surprise to us. 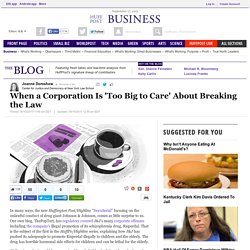 Our own blog, ThePopTort, has regulatory covered J&J's many corporate offenses including the company's illegal promotion of its schizophrenia drug, Risperdal. That is the subject of the first in the HuffPo/Highline series, explaining how J&J has pushed its salespeople to promote Risperdal illegally to children and the elderly. The drug has horrible hormonal side effects for children and can be lethal for the elderly. J&J's misconduct would have remained largely hidden had it not been for lawsuits against the company by those injured or made sick. Indeed, this case illustrates one of the most important functions of civil lawsuits: public disclosure of information. While some fault for this lies with the U.S. J&J and Wall Street analysts could not be clearer about this. Doctors, Device Makers: Close Ties. Huffingtonpost FDA Approval Of Medical Devices Involves Shockingly Little Research. Sisters-in-Arms Unite to Battle Transvaginal Mesh (TVM) Misinformation and Pending Judicial Countdown.

FORT LAUDERDALE, Fla. --(BUSINESS WIRE)--In what has taken shape as a classic sister solidarity story, three female strangers, united by sickness, have joined forces to educate hundreds of thousands of women across the United States who continue to suffer in silence from their trans-vaginal mesh (TVM) implants. Shari of Florida, Mica from Mississippi, and Beverly from West Virginia want women to get informed of their rights and know the judicial countdown looms on the horizon that can bring resolution to these cases. The Sisters-in-Arms are pointing women towards MedicalExposure.com to get information and become empowered with knowledge against TVM ignorance, vaginal mesh erosion, and mesh bladder sling recalls.

“I had TVM surgery in 2009 and experienced vaginal pain and painful intercourse until I had the mesh removed in 2015 because I was too embarrassed to seek help from another physician.” It’s been a tough dozen years for Shari. About MedicalExposure.com. Not enough safety testing on medical implant devices, studies claim. Every day, people receive medical implants -- artificial valves, hip replacements, surgical mesh and the like -- that may not have been rigorously tested before or after their approval by the U.S. Food and Drug Administration, two new studies contend. The studies -- conducted by prominent nonprofit groups and published online Sept. 29 in JAMA Internal Medicine -- lay the blame for inadequate medical device testing on lax oversight by the FDA.

Manufacturers didn't submit any scientific evidence on the safety or effectiveness of 42 out of a sample of 50 new implants in their applications to the FDA, according to a review conducted by the nonprofit National Center for Health Research. The FDA cleared the implants for use in humans. "If you are a doctor who wants to know what the scientific evidence is that this device is safe and effective, there is no publicly available evidence," said Diana Zuckerman, president of the National Center for Health Research. Dr. Harmed Patients are Legally Screwed: Watch This Video. Texas women injured by pelvic mesh ask state to investigate.

DALLAS Linda Batiste says the pain from pelvic mesh is constant. 'It actually does feel like a scouring pad in your body,' she said. When the law fails. Hooman Noorchashm, MD, PhD, and Amy J. Reed, MD, PhD Posted: Tuesday, December 23, 2014, 5:30 AM Consider this. Imagine a heavily travelled intersection with a faulty traffic light that turns green in both directions with a certain frequency.

Imagine you and your loved ones are passing through that intersection, complete in your trust that the light will ensure safe passage. J&J Hurts Women Light Brigade Action Outside 2014 Annual Shareholders Meeting on Vimeo. J&J's Ethicon settles Prolift pelvic mesh bellwether. Can we still have a clear conscience, routinely offering vaginal mesh operations in plastic and reconstructive surgery of the pelvic organ prolapse?

Abstract Introduction: Since many years, plastic and reconstructive surgery in pelvic organ prolapse (POP) has been performed by vaginal mesh surgery. Although warnings from the scientific societies and the FDA have been published, vaginal mesh surgery still remains a routine treatment of genital prolapse in the female. Background: Many third-degree referral centres in operative gynaecology found a high number of severe complications after mesh repair. Compared to the minor complications known from the classical non-mesh plastic and reconstructive surgery, there is a clear difference concerning the severity of complications. Pelvic Mesh Lawsuits: Thousands Of Women Sue Over Surgical Mesh Complications. ATLANTA — Soon after her surgery, Susan Harrison had a string of infections that caused intense pain, leaving her weak and unable to pick up and play actively with her young grandchildren.

The discomfort and fatigue often kept her from her job as a kindergarten classroom assistant. For years, Harrison thought it was just an unfortunate consequence of the surgery to repair weak muscles in her pelvic region. But she discovered five years after her 2006 procedure that she was one of thousands of women who say their pain was caused by surgical mesh implanted to fix the problem. Woman Sues Johnson & Johnson in Potential $1.7 Billion Class Action Over Prolift Transvaginal Mesh Injuries. Public Citizen blasts FDA for weak regulation of implanted surgical mesh. Transvaginalmeshlawsuitlawyer. Texas attorney general's office investigating pelvic mesh. SPECIAL REPORT: Doctor warns of pain associated with using... Transvaginal Mesh Lawsuit News: Joint Status Conference Scheduled to Take Place this Month in West Virginia Federal Court.