The 1920s - Also known as the Roaring Twenties 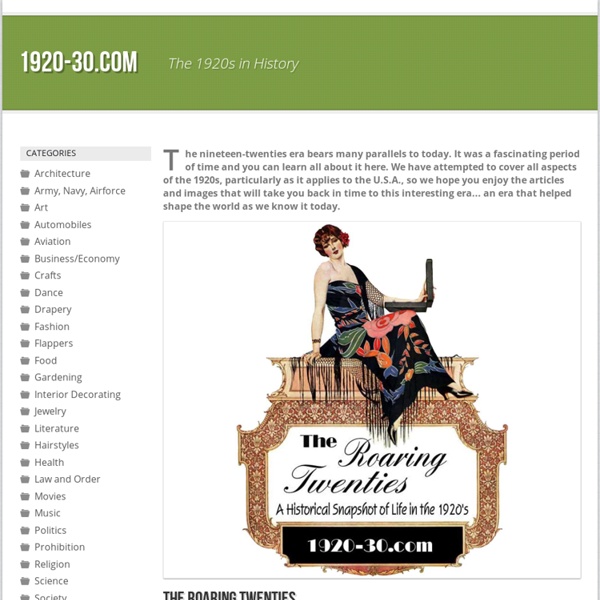 1920s The 1920s was a decade that began on January 1, 1920 and ended on December 31, 1929. It is sometimes referred to as the Roaring Twenties or the Jazz Age, when speaking about the United States and Canada. In Europe the decade is sometimes referred to as the "Golden Age Twenties"[1] because of the economic boom following World War I. Since the end of the 20th century, the economic strength during the 1920s has drawn close comparison with the 1950s and 1990s, especially in the United States of America. These three decades are regarded as periods of economic prosperity, which lasted throughout nearly each entire decade. Each of the three decades followed a tremendous event that occurred in the previous decade (World War I and Spanish flu in the 1910s, World War II in the 1940s, and the end of the Cold War in the late 1980s). The 1920s were characterized by the rise of radical political movements, especially in regions that were once part of empires. Social history[edit] Wars[edit] Asia[edit]

Jazz Age The Jazz Age was a feature of the 1920s (ending with The Great Depression) when jazz music and dance became popular. This occurred particularly in the United States, but also in Britain, France and elsewhere. Jazz played a significant part in wider cultural changes during the period, and its influence on pop culture continued long afterwards. Jazz music originated mainly in New Orleans, and is/was a fusion of African and European music. The Jazz Age is often referred to in conjunction with the phenomenon referred to as the Roaring Twenties. African Americans[edit] The birth of jazz music is generally credited to African Americans,[1] but expanded and over time was modified to become socially acceptable to middle-class white Americans. Radio[edit] The spread of jazz was encouraged by the introduction of large-scale radio broadcasts in 1922. Youth[edit] Women[edit] Classical music[edit] Jazz today[edit] Today, jazz has evolved as an influential principle in music. See also[edit] Notes[edit]

What Happened in the 1930s featuring News, Popular Culture, Prices and Technology The Thirties saw the growth of Shanty Towns caused by the Great Depression, Dust Storms, Radical Politics Around The World, and what many consider an upside down world where bank robbers were seen as hero's not villains. Jump To 1930's Fashions -- Toys -- Cars -- Popular Culture -- Homes -- Technology -- Cost Of Living -- Sports Money and Inflation 1930's To provide an estimate of inflation we have given a guide to the value of $100 US Dollars for the first year in the decade to the equivalent in today's money If you have $100 Converted from 1930 to 2005 it would be equivalent to $1204.42 today "If You Had 1 billion dollars then it would now be worth 12 billion dollars." What Happened in the Thirties The events listed below we have tried to put a small paragraph on the specific year page providing additional information ) What Happened in 1930 History Smoot-HawleyTariff bill is passed, raising duties on imports. What Happened in 1935 History The Boulder (Hoover) Dam is completed. From $475

1920's Society Changes in American society occurred due to events happening that impacted nearly everyone. Communism, immigration, race relations, Ku Klux Klan, prohibition, working women, women voting, evolutionary science, advances in medicine, new technology, and the stock market crash were all strong influences in most peoples lives. Technological advances created labor and time-saving devices that reduced the drudgery of everyday life. Refrigerators allowed food to be stored for longer periods which meant less trips to the store, and automobiles facilitated access to the stores. Frozen food became available which reduced preparation time for meals and the need for vegetable gardens. Large department stores provided a huge range of products to choose from and chain stores reduced the price of goods putting many small shop and drug stores out of business. Consumption habits were influenced by the introduction of instalment plans and small loan credit.

Flappers and the Roaring 20's - www Flappers were a so-called new style of Western woman, and the term “flapper” was invented to describe this so-called new breed. Initiated in the 1920s, the term “flapper” described women who flamboyantly flouted their contempt for what was back then deemed as societal behavior that was conventional. Flappers were women who were characterized by their choice of bobbed hair, short skirts, and their enjoyment of jazz music. They were branded as brash for their enjoyment of casual sex, drinking, immoderate makeup, driving cars and smoking. The origins of flappers, ideologically, were seen as being rooted in liberalism. There is debate over what the etymology of the word “flapper” really is. After World War I, the flapper generally represented a lewd and disreputable woman who consistently flouted the conventions of society at the time of the 1920s. The image of the flapper was something of a direct result of the popular disgust among Americans at the Prohibition laws.

Roaring Twenties The Roaring Twenties is a term sometimes used to refer to the 1920s in the United States, Canada, and the United Kingdom, characterizing the decade's distinctive cultural edge in New York City, Chicago, Paris, Berlin, London, Los Angeles and many other major cities during a period of sustained economic prosperity. French speakers called it the "années folles" ("Crazy Years"),[1] emphasizing the era's social, artistic, and cultural dynamism. Normalcy returned to politics in the wake of hyper-emotional patriotism after World War I, jazz music blossomed, the flapper redefined modern womanhood, and Art Deco peaked. Economically, the era saw the large-scale diffusion and use of automobiles, telephones, motion pictures, and electricity, unprecedented industrial growth, accelerated consumer demand and aspirations, and significant changes in lifestyle and culture. Economy[edit] Chart 1: USA GDP annual pattern and long-term trend, 1920-40, in billions of constant dollars[4] Demobilization[edit]

The United States Turns Inward: the 1920s and 1930s After its participation in the conflagration then known as the Great War, the American nation was ready to turn inward and concentrate on domestic affairs (a "return to normalcy," as 1920 presidential candidate Warren Harding called it). Private concerns preoccupied most Americans during the 1920s until the Great Depression of the next decade, when increasing numbers turned, in their collective misfortune, to government for solutions to economic problems that challenged the very basis of U.S. capitalistic society. The 1920s: Decade of Optimism. By the 1920s innovative forces thrusting into American life were creating a new way of living. The automobile and the hard-surfaced road produced mobility and a blurring of the traditional rural-urban split. The radio and motion pictures inaugurated a national culture, one built on new, urban values. Traditional WASP (white, Anglo-Saxon Protestant) America fought the new ways. The 1930s: Decade of Depression. Recovery was Roosevelt's first task.