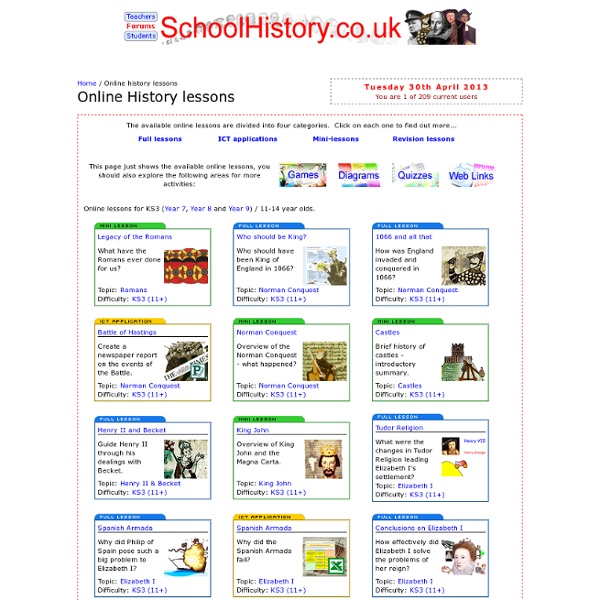 B1 level English language practice tests B1 is one of the CEFR levels described by the Council of Europe. The ability to express oneself in a limited way in familiar situations and to deal in a general way with nonroutine information. Examples: Can ask to open an account at a bank, provided that the procedure is straightforward. Can understand the main points of clear standard input on familiar matters regularly encountered in work, school, leisure, etc.

U.S: Geography, states, landmarks, maps, cities, population, laws, speeches U.S. States, Cities, History, Maps Year by Year: 1900–2015 The History of English (BBC animation) - LinkEngPark Anglo-Saxon The English language begins with the phrase ‘Up Yours Caesar!’ as the Romans leave Britain and a lot of Germanic tribes start flooding in, tribes such as the Angles and the Saxons – who together gave us the term Anglo-Saxon, and the Jutes – who didn’t. Listening: A Tour of London Tower Bridge, London (Copyright: Getty) When you visit a city for the first time, a good way to explore it is to go on an organised sightseeing tour. The tour will give you an overview of what there is to see and also provide you with some historical background.

Basic English expressions In this section you will find our collection of easy-to-play card games created to make the learning process more fun. Each package includes game accessories and instructions.Being a part of the Wordies in Space series, our games are designed for practising and revising the new language material presented on the Reader and Reference Cards.They are easy to teach, fun to play in pairs or small groups, and lots of them can be adapted to play with any vocabulary or sentence patterns, so you can use them independently, in any way feeting your needs, as well as change or invent game rules. Enjoy! This is a game for 4 players adapted from the traditional game Go Fish! Dr. Martin Luther King Jr. Articles & Videos Skip to main content <div id="nojs-warning">WARNING: Javascript must be enabled for the correct page display</div> Sign InRegister ReadWorks.org The Solution to Reading Comprehension Search form

Languages and education in the United Kingdom (UK) - Statistics & Facts There is no denying that the United Kingdom is a linguistically diverse nation, with languages from all over the globe spoken within its borders. However, English native speakers are often criticized, as most cannot speak another language. Education is often held to blame as the root of the problem, as not enough pupils are encouraged to take a language subject at school. It is not compulsory to study a language in post-16 education and the numbers of students studying a European language at A level (Higher level in Scotland) have been falling across the United Kingdom in recent years. The latest figures show that, although French is still the most popular modern foreign language choice, only 3.6 percent of students in England chose to study it in 2014.

Celebrate Black History Month 2016 Skip to main content <div id="nojs-warning">WARNING: Javascript must be enabled for the correct page display</div> Sign InRegister ReadWorks.org The Solution to Reading Comprehension Search form Conversation cards Are you finding these conversation cards useful? Our new book 50 Conversation Classes features 50 themed sets of conversation cards each set is accompanied by a sheet of vocabulary, grammar and idiom activities to help prepare the ground. Keep it in your bag and you’ll always have a back-up plan. Buy it now from Amazon, get it as an eBook or view some sample pages.