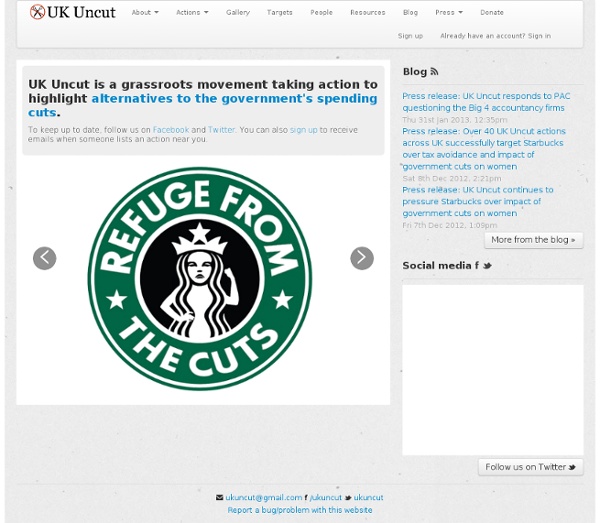 Cancer, a Man-Made Disease | Causes and Prevention December 03, 2010 | 336,092 views Share A study of ancient bodies has determined that cancer is a man-made disease, one fueled by the excesses. Tumors turn out to be extremely rare until very recent times, when pollution and poor diet became issues. Researchers analyzed potential references to the disease in classical literature, and also searched for signs in the fossil record and in mummified bodies. But despite examining tissue from hundreds of Egyptian mummies, they confirmed only one case of cancer According to the Daily Mail: "Dismissing the argument that the ancient Egyptians didn't live long enough to develop cancer, the researchers pointed out that other age-related disease such as hardening of the arteries and brittle bones did occur ...

Antibanks Bailiffs and debt collectors : Directgov - Money, tax and benefits A bailiff may visit your home if you don’t pay your debts - eg a Council Tax bill, parking fine, court fine, county court or family court judgment. This will happen if you ignore letters saying that bailiffs will be used. Bailiffs must normally give you at least 7 days’ notice of their first visit. You can stop bailiffs from visiting by paying the money you owe. Talk to the person or business you owe money to as soon as possible to get advice on how to pay your debt. Bailiffs are also known as ‘enforcement agents’. Dealing with bailiffs In most cases, you don’t have to open your front door to a bailiff or let them in. Bailiffs are not usually allowed to force their way into your home - eg by pushing past you, or putting their foot in the door. However, if you don’t let them in or agree to pay them: they could take things from outside your home - eg your car you could end up owing even more money If you do let them in, but don’t pay them, they may take some of your belongings. Bailiffs can’t:

Occupy Wall Street The War on Cancer: a Progress Report for Skeptics March 30, 2011 | 416,050 views Disponible en Español Share In 1971 President Nixon and Congress declared war on cancer. "These summary statistics show that the war on cancer has not gone well," says the article's author, Reynold Spector. Are You Still Drinking Soda? June 08, 2011 | 298,934 views Share Tom Philpott got much more of a reaction to his February 10, 2011, aspartame article than he expected. He reports, "I guess in the back of my mind, I was thinking, people still drink that stuff?" Well, they do—by the bucketful. Overall, U.S. soda consumption is declining slowly, but Americans still drink more soda than anyone else on the planet, by a wide margin. Adam Ozimek of the Modeled Behavior blog quickly mounted a vigorous defense of aspartame, the artificial sweetener of choice for the soda industry, claiming, "the unnecessary stress caused by worrying about the aspartame in your diet soda is far more dangerous for you than the aspartame in your soda." Ozimek also compared warnings about aspartame's danger to 9/11 conspiracy theories, claiming the FDA "adequately followed its food additive approval process in approving aspartame."

The True Price Of Gas: What It Should Really Cost To Fill Up If you've filled up a car recently, you surely think that the price of gas is too high. Of course, you've seen the data--gas is much more expensive in other parts of the world than in America, but that doesn't change how it effects your wallet at the gas station. But take away arguments about which countries subsidize or tax gas the most and focus on the costs of simply using gasoline that aren't included in the price, and you start to realize you are getting a good deal, even at $4 a gallon. The Center for Investigative Reporting (CIR) recently put out a video of their efforts to track the costs of all the externalities of a gallon of gas; the unseen costs that we pay because of each gallon we use. First, consider all the costs of drilling, extracting, and transporting oil. From there, you have to examine the effects of all those emissions. Then, of course, there are environmental disasters like oil spills. Hat tip: Climate Progress

UK plc must do its bit for broken Britain | Business Britain has a rubbish infrastructure. The road network gets clogged up and the rail network is a relic of the 19th century. We know this because business bangs on incessantly about the money it is losing through congestion and delay. Britain has a substandard workforce. In one sense, these criticisms are fair, as anybody who has sat in a traffic jam on the M25 or experienced incompetent or rude service knows all too well. But unless the government is going to abolish corporate taxes altogether, it is right - as Vince Cable noted in these pages last week - that business makes a contribution to the infrastructure on which it relies. To listen to corporate lobbying groups, you would imagine that companies are more than happy to do their bit but are forced into offshore arrangements by the demands of a punitive tax regime. No, the real reason that business avoids paying tax is because it can. And, let's not be naive; this is a normal response. So what to do? Too light a touch

Cognitive Dissonance and learning Cognitive dissonance is a psychological phenomenon which refers to the discomfort felt at a discrepancy between what you already know or believe, and new information or interpretation. It therefore occurs when there is a need to accommodate new ideas, and it may be necessary for it to develop so that we become "open" to them. Neighbour (1992) makes the generation of appropriate dissonance into a major feature of tutorial (and other) teaching: he shows how to drive this kind of intellectual wedge between learners' current beliefs and "reality". Beyond this benign if uncomfortable aspect, however, dissonance can go "over the top", leading to two interesting side-effects for learning: if someone is called upon to learn something which contradicts what they already think they know — particularly if they are committed to that prior knowledge — they are likely to resist the new learning. On cognitive dissonance and sour grapes On application of the theory to Aids

Congress & President on Veterans Day Still Prefer To Give Jobs To Immigrants Updated: by Roy Beck I have no doubt that the President and all the Members of Congress who this week expressed concern for unemployed veterans were sincere. But I also believe that, for the majority of them, moving young veterans into jobs is a much lower priority for them than to continue high levels of immigration to satisfy one special interest group or another. What our country's unemployed veterans have to keep in mind is that Pres. Obama, Senate Majority Leader Reid and House Speaker Boehner have spent the first 10 months of this year making sure that 7 million illegal aliens keep their U.S. jobs and making sure that another ONE MILLION legal immigrants have been given permanent work permits to compete with veterans for jobs. For most of our politicians, this is a day to "Honor Our Veterans As Long As It Doesn't Interfere With Mass Immigration." Take a look at the following from an article by Allison Linnfrom the NBC Today Show website: ROY BECK is Founder & CEO of NumbersUSA Tags: