Welcome to Faeries and Enchantment 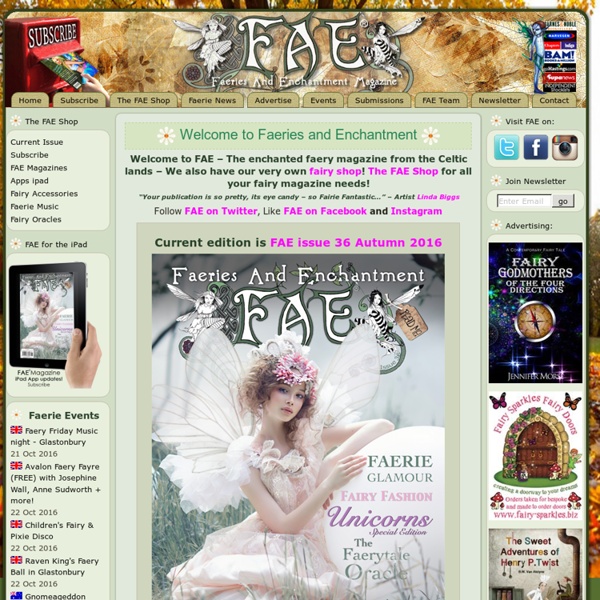 Grey School of Wizardry :: PO Box 758, Cotati CA 94931, USA Witchcraft World - Witchcraft Spells Wiccan Spells Spells are used in witchcraft to channel the power of the Wiccan God and Goddess to initiate positive change and for resolution of problems. It is important to know what phase the moon is in while practicing spells and witchcraft. For example, it is best to do spells of a banishing or destructive nature in the waning of the moon, when it is dark and the new moon is about to wane. Constructive spells Spells of a constructive nature should be performed during the waxing of the moon, when the moon is full and bright. Spells Resources Purchase your Simple Spell Casting E-Kit today! Click Here! Consecration/Purification in Spells Consecration is defined by the dictionary as to “dedicate formally to a religious or divine purpose.” Three Red Leaves Spell This spell is used to protect the mind against things such as nightmares, negative thoughts and “invasions of evil”. Then extinguish the candle, and wrap the leaves in a white cloth or pouch.

THE JUNKY SPOT Import Action Figures, Import Toys, Obitsu dolls A Picture of the Fairy Kingdom This is a picture of the Fairy Kingdom. Faeries, the fae, elementals – so many different names for our fairy friends! "Hand in hand, with fairy grace,Will we sing, and bless this place." I want to share with you a picture of the Fairy Kingdom, that is, some of the Fairies and Elementals in this very special, mystical world - at least the ones we know about! These wonderful beings are in abundance in our everyday lives, but we usually take no notice of them, or worse yet, we ignore them! With our busy and technological lives, this aspect of living in harmony with nature and the wonderful beings that inhabit it, is rapidly fading away. Now is the time to reconnect, communicate with and appreciate our fairy friends. Types of Fairies and Elementals The four elements are fire, earth, air and water, and the members of the Fairy Kingdom belong to one of these elements. The King of the Salamanders is a magnificent being called Djinn. The Archangel associated with the Fire Element is Michael.

Three Types of Faery Lovers Faery Lovers Faeries are said to be a lusty bunch, and their habit of taking human lovers is well-documented in European folklore: Thomas the Rhymer and Tam Lin are two of the most famous stories featuring human-faery liaisons. Sadly, the majority of these unions turned out badly. The medieval Church frowned upon all things Fae, preaching that faeries had no souls and no hope of salvation, as they are not "children of Adam." A human who took a faery lover was seen as endangering his or her own soul, and many of these stories do double-duty as warnings to avoid the Fae and metaphors for the problems created by extra-marital sex. Sexual encounters with faeries seem to fall into one of three categories: Procreative: A faerie marries or abducts a human and has children with them, possibly because humans are said to be more fertile than the Fae. Passionate: A faerie and a human fall in love. One of the most famous stories in this category is the Irish legend of Connla and the Fairy Maiden.

The Henge of Keltria - Druidism for the 21st Century The Honey Jar Family of Magic Spells The Honey Jar Spell is one of the oldest forms of bottle spell in the world. There are so many variations that i call it a "spell family." Most of them consist of a jar or box of liquid or solid sweetener into which you place the personal concerns of the person you want to influence, along with spiritually powerful magical herbs, wrapped in a name-paper or petition packet, and then burning a candle on top of the jar after dressing it with an appropriate conjure oil. This form of hoodoo spell casting is employed when you want to set up a powerful sweetening spell in a small place and keep it working for as long as you wish. In the oldest version of the Honey Jar spell that i know, there is actually no "honey-jar," just a plain white tea cup saucer or coffee cup saucer in the center of which you burn a candle on the person's name, dressed with hoodoo oils and surrounded by a poured-out ring of pancake syrup or mollasses. You will need: Get a small jar of sweetener. should read

Learn to Sculpt Fairies out of Polymer Clay! Chants, Blessings, Prayers and Charms A Spell to Cast Away Darkness Belisama Fire 2001 In the center of the darkest storm, Is a brilliant rainbow, bright and warm. Look past the darkness that you see, There's more than what you think might be. There now is freedom, so you can find, The path to stimulate your mind. So don't despair, let hope shine bright, The sun will rise, just past the night. A Spell for Healing May the light that shines from deep inside, Flow ever out, and never hide. May the shining light within my soul, Heal me now, and make me whole. May the light that shines so very bright, Help heal ________, on this night. May the shining light within my core, Bring peace and love, forever more. A Happy Positive Day Now close your eyes and visualize the day you want to have, image who is there, what you are wearing, the place, surroundings, the atmosphere, what the weather is like and other things that you would like to happen. Hold this image for as long as you can, then repeat the following 3 times: "God and Goddess hear my plea,

Ishtar and the Morrigan Inanna. Ishtar. Anat. Sekhmet-Bast. These goddesses of love and war were the original kick-ass heroines: the Buffys and the Anita Blakes of the ancient world. The similarities between Ishtar and Morrigan are many: Both are warriors in cultures when men dominated the battlefield, and both were lusty in nature, taking lovers as they pleased, before and sometimes after marriage. Is it a coincidence that these goddesses from such different parts of the world have so much in common? Jungians might argue that Ishtar and the Morrigan are similar because they're both expressions of an archetype that's embedded in the human subconscious. There are several different points in history where the Celts could have been exposed to Ishtar: The people who eventually became the Celts originated in the steppes of Russia, migrating westward into Europe. Who's your favorite kick-ass heroine? One lucky commenter wins their own copies of Blood Hero and Faery's Bargain! Blood Hero: She's Sex, He's Death

Witches' Voice Inc. - 30 May, 2011 - 3:44:26 AM Magical Wood Properties and the Magical Properties of Wood by DragonOak Feminine energy. Elder is a sacred tree of Celtic Astrology 25 November to 23 December. The Elder is also said to be the tree used in the crucifixion of Christ. Associated with the Celt Goddess Cailleach Beara and the Raven. Some have considered this tree to be unlucky due to its association with the crucifixion, or it may one of those nasty rumors started by the church in order to combat belief systems outside their on scope of a limited belief system. Magical Properties: Elder wands are most often used in Faerie Magic, banishment, magical arts, protection from evil, imagination, change, and healing. Feminine energy. Magical Properties: Use of the Elm wands is strong in magic used concerning endurance, fertility, horticulture, passage thru death and phases of life, rebirth, and invocation of the Goddess. by DragonOak| Masculine energy. by DragonOak| Feminine energy. Magical Properties: Artistic ability, magical knowledge, and optimism are provided by the enchanting use of Hazel.