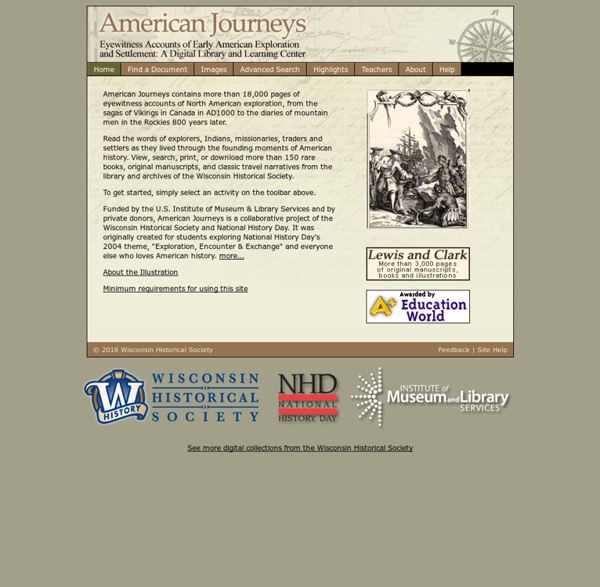 Related:  Where to find information - US History

African Americans and World War I World War I was a transformative moment in African-American history. What began as a seemingly distant European conflict soon became an event with revolutionary implications for the social, economic, and political future of black people. The war directly impacted all African Americans, male and female, northerner and southerner, soldier and civilian. Migration, military service, racial violence, and political protest combined to make the war years one of the most dynamic periods of the African-American experience. Black people contested the boundaries of American democracy, demanded their rights as American citizens, and asserted their very humanity in ways both subtle and dramatic. Recognizing the significance of World War I is essential to developing a full understanding of modern African-American history and the struggle for black freedom. When war erupted in Europe in August 1914, most Americans, African Americans included, saw no reason for the United States to become involved.

CIA Declassified Documents Database President's Daily Brief 1969-1977 The declassified President’s Daily Briefs (PDBs) from the Nixon and Ford presidential administrations in this collection include about 2,500 documents and 28,000 pages. As part of this release, CIA held a symposium, "The President's Daily Brief: Delivering Intelligence to Nixon and Ford, " at the Richard Nixon Presidential Library in Yorba Linda, CA on 24 August 2016. The PDBs contain the highest level of intelligence on the president’s key national security issues and concerns. These documents were the primary vehicle for summarizing the day-to-day sensitive intelligence and analysis, as well as late-breaking reports, for the White House. 31 October 2016 - Release of Draft Fifth Volume, CIA's Internal Investigation of the Bay of Pigs Between 1979 and 1984, Central Intelligence Agency (CIA) staff historian Jack Pfeiffer prepared five volumes of the Agency’s Official History of the Bay of Pigs Operation.

Library of Congress - Digital Moving Image Collections America at Work, America at Leisure: Motion Pictures from 1894-1915 Work, school, and leisure activities in the United States from 1894 to 1915 are featured in this presentation of 150 motion pictures, 88 of which are digitized for the first time (62 are also available in other American Memory presentations). Highlights include films of the United States Postal Service from 1903, cattle breeding, fire fighters, ice manufacturing, logging, calisthenic and gymnastic exercises in schools, amusement parks, boxing, expositions, football, parades, swimming, and other sporting events. Prolific inventor Thomas Alva Edison (1847-1931) has had a profound impact on modern life. American Variety Stage: Vaudeville and Popular Entertainment, 1870-1920 This collection illustrates the vibrant and diverse forms of popular entertainment, especially vaudeville, that thrived from 1870-1920. Buckaroos in Paradise: Ranching Culture in Northern Nevada, 1945-1982 Origins of American Animation

Voices Remembering Slavery: Freed People Tell Their Stories |  Library of Congress The recordings of former slaves in Voices Remembering Slavery: Freed People Tell Their Stories took place between 1932 and 1975 in nine states. Twenty-three interviewees discuss how they felt about slavery, slaveholders, coercion of slaves, their families, and freedom. Several individuals sing songs, many of which were learned during the time of their enslavement. It is important to note that all of the interviewees spoke sixty or more years after the end of their enslavement, and it is their full lives that are reflected in these recordings. The individuals documented in this presentation have much to say about living as African Americans from the 1870s to the 1930s, and beyond. All known recordings of former slaves in the American Folklife Center are included in this presentation. Three of the recordings presented here were made for the Commonwealth of Virginia between 1937 and 1940 by Roscoe E. Twenty-eight songs (or song fragments) are included in the recordings.

Many Pasts Many Pasts This feature contains primary documents in text, image, and audio about the experiences of ordinary Americans throughout U.S. history. All of the documents have been screened by professional historians and are accompanied by annotations that address their larger historical significance and context. Browse the list of documents below (sorted by time period, beginning with the earliest). There are 1016 matching records, sorted by time period. “All Over the Land Nothing Else Was Spoken Of ”: Cabeza de Vaca Takes Up Residence as a Medicine Man in the Southwest, 1530sOne of the earliest accounts of the European-Indian encounter in North America was of the ill-fated 1527 expedition of Pánfilo de Narváez. “Carried Thence for Trafficke of the West Indies Five Hundred Negroes”: Job Hortop and the British Enter the Slave Trade, 1567Great Britain recognized the lucrative possibilities of the Atlantic slave trade long before it permanently colonized North America.

Making of America - Digital Library of Primary Sources on American History aking of America (MoA) is a digital library of primary sources in American social history from the antebellum period through reconstruction. The collection is particularly strong in the subject areas of education, psychology, American history, sociology, religion, and science and technology. The collection currently contains approximately 10,000 books and 50,000 journal articles with 19th century imprints. For more details about the project, see About MoA. Making of America is made possible by a grant from the Andrew W. Mellon Foundation. New Additions: We have recently added a new feature, subject browsing. 99 more volumes focusing on New York City were added to MoA in June 2007.

The African-American Migration Experience - Sources For enhanced functionality view Flash version of this site New societies, new peoples, and new communities usually originate in acts of migration. Someone or ones decide to move from one place to another. They choose a new destination and sever their ties with their traditional community or society as they set out in search of new opportunities, new challenges, new lives, and new life worlds. But until recently, people of African descent have not been counted as part of America's migratory tradition. In Motion: The African-American Migration Experience presents a new interpretation of African-American history, one that focuses on the self-motivated activities of peoples of African descent to remake themselves and their worlds. These journeys did not originate in the east with the1619 arrival of Africans in Jamestown, Virginia, as is commonly believed, but almost a century earlier, further south.

Open ebook: History in the Making: A History of the People of the United States of America to 1877 The textbook covers Pre-Columbian America through Reconstruction and it is certainly comprehensive in terms of the subjects it addresses and the depth and detail that it includes, overall. At 850 pages, it bucks the trend among textbook publishers to reduce the length and depth of a textbook with each new edition. Perhaps there can be too much of a good thing, though. I question whether students will read such a large textbook over the duration of the semester. Even the most committed students who approach the readings with gusto early in the semester might forego them as the semester intensifies. At the same time, searching for particular terms and subtopics proves challenging. The text is accurate and devoid of bias. Published in 2015, there are areas in which this textbook is outdated. The writing is solid. The text is consistent in terms of its framework. The chapter topics are organized similarly to other textbooks. I did not experience any significant interface issues.

Related:
Related:  Where to find information - US History