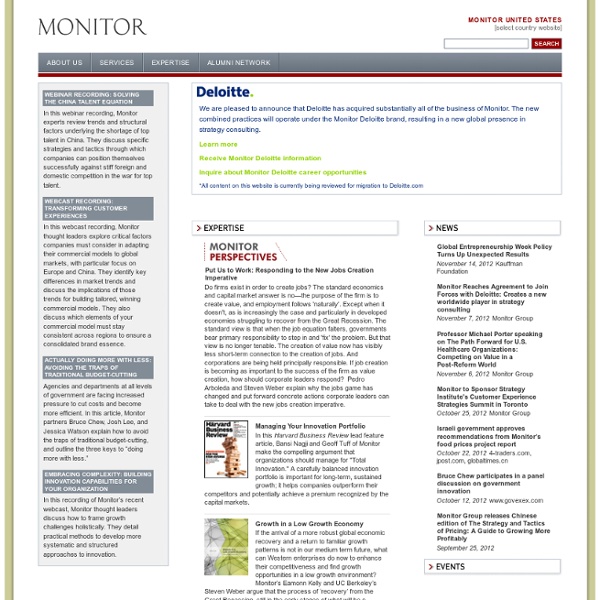 The Cambridge Group Monitor Group Monitor Group (informally Monitor, legally Monitor Company Group LP) was a multinational management consulting firm headquartered in Cambridge, Massachusetts, United States and with 27 offices in 26 major cities around the world.[1] It was founded in 1983 by six entrepreneurs with ties to the Harvard Business School, including Michael Porter. In January 2013, Monitor Group was acquired by Deloitte to form a strategy and business transformation consultancy known as Monitor Deloitte. [2] Monitor specialized in providing strategy consultation services to the senior management of organizations and governments. It helped clients address a variety of management areas, including Strategy, Innovation, Organization and Leadership, Economic Development and Security, and Marketing and Pricing. Monitor's main competitors were Bain & Company, Booz & Company, The Boston Consulting Group, A.T. History[edit] Monitor was hit by the 2008 economic crisis. Operations[edit] References[edit]

LSE head quits over Gaddafi scandal A deepening row over the London School of Economics and its dealings with the Gaddafi regime has claimed the career of the university's director. Sir Howard Davies resigned after fresh revelations that the institution had been involved in a deal worth £2.2m to train hundreds of young Libyans to become part of the country's future elite. An independent inquiry headed by Lord Woolf, a former lord chief justice, will examine the LSE's relationship with Libya and with Muammar Gaddafi's son Saif al-Islam. It will also establish guidelines for international donations to the university. Davies said: "I have concluded that it would be right for me to step down even though I know that this will cause difficulty for the institution I have come to love. His resignation came as a US consultancy admitted mishandling a multimillion dollar contract with Libya to sanitise Gaddafi's reputation in the west. • A payment of £20,000 for tuition of the head of the Libyan investment authority.

Point B LSE plans Libya scholarship fund with Gaddafi donation The London School of Economics's governing body was in talks on Tuesday night on how to defuse a growing row over a £300,000 donation from a charitable foundation run by Muammar Gaddafi's son. The university, which has spent half the money it received from Saif al-Islam Gaddafi, is looking at setting up a £300,000 scholarship fund for Libyan students. The donation was intended to finance a North Africa research programme at the elite institution. That programme was suspended last week amid fears that it had tainted the university's reputation. The LSE separately confirmed it was investigating claims that Saif Gaddafi had plagiarised parts of his doctoral thesis. The thesis has been interrogated on an internet site which claims to have uncovered 17 alleged instances of copying, including "a lengthy section on the World Trade Organisation taken verbatim from [the] WTO website". The thesis was examined by Lord Desai, a Labour peer, who told the BBC that Gaddafi had defended it thoroughly.

Universities hit out at visa plans for foreign students | Education | The Observer Universities across the country will have to close vital science and engineering courses and sack staff unless the home secretary, Theresa May, drops controversial plans to limit UK visas for international students, a powerful alliance of vice-chancellors has warned. In a letter to the Observer, 16 vice-chancellors express their "profound concern" at the proposals, making clear that they will have a devastating effect on universities' incomes and their ability to run the best courses for British, as well as overseas, students. Their intervention will stoke a cabinet battle that has pitted May, who is committed to cut net immigration from 215,000 to 100,000 by 2015, against the business secretary, Vince Cable, and the universities minister, David Willetts. Cable and Willetts are known to be deeply concerned about the damage to universities and the economy if the £5bn-a-year income universities get from overseas students is choked off.

Cuts in the number of international students spell disaster | Letters | From the Observer | The Observer We write to express profound concern at the damage that would be caused to the UK economy and to our universities if the government's proposals to reduce the number of international students coming to the UK are implemented. Universities are fully aware of public concern about abuse of immigration rules. Any abuse must be tackled robustly and Universities UK will co-operate fully in ensuring that cases of abuse are minimised. International students coming to universities contribute more than £5bn each year to the UK economy through tuition fees and off-campus expenditure. Without international students, many university courses, particularly science and engineering ones, may no longer be viable. Stub out the tobacco claims Display bans have been successfully introduced in Ireland, Canada and most of Australia. In Ireland, the proportion of young people believing that smoking was common in their age group fell from 62% to 46% after displays were banned. Stephen Williams MP London SW1

LSE director resigns Sir Howard Davies has resigned as director of the London School of Economics, and the school’s governing council has launched an independent inquiry into its relationship with Libya and with Saif Gaddafi. A statement released this evening following an emergency meeting of the LSE’s council confirms that Sir Howard has stepped down. The council says it has accepted his resignation “with great regret and reluctance”. It says it has commissioned an independent external inquiry which will be conducted by Lord Woolf, former Lord Chief Justice of England and Wales and former chairman of the council of University College London. The LSE has been at the centre of an escalating media storm over the institution’s links with Libya. According to a report published today in The Times, US diplomatic cables published by WikiLeaks indicate that the university secured a deal to train hundreds of future members of the dictatorship’s elite. Sir Howard took up the post of director of LSE in 2003. Dear Peter,

Memorandum to the London School of Economics Council warning it not to accept a grant from the Qaddafi Foundation LSE and the Qaddafi Foundation: a Dissenting Note As senior academic and administrative colleagues are aware, I have, since visiting Libya in 2002 as part of a British Council delegation, had serious misgivings about some of the School’s dealings with that country. These I have expressed on numerous occasions, in writing and verbally, to senior colleagues. While I am in favour of British government and business attempts to develop links with Libya, and support LSE work that is of a consultancy and advisory character, and while encouraging personal contact with whatever Libyan officials we meet, I have repeatedly expressed reservations about formal educational and funding links with that country. On the basis of the documents and conversations I have had with School officials about this matter, I would wish to register the following reservations about acceptance of the Qaddafi Foundation donation: (iv) Much is made of Libya’s altered position in international relations.

Should universities take donations from tyrants? The London School of Economics rarely finds itself in the same company as Nelly Furtado. However, like the Canadian singer, its relationship with Libya has given rise to controversy. The LSE quickly moved to suspend its links with the Gaddafi International Charity and Development Foundation, run by Saif Gaddafi, son of Muammar Gaddafi. But this swift action failed to protect it from a torrent of criticism, including from David Cameron, and, last week, its director, Howard Davies, resigned. "I advised the council that it was reasonable to accept the money and that has turned out to be a mistake," he said. He had previously said: "I don't accept that the decision was taken without due consideration at the time," pointing out that the British government had encouraged him to engage with the Libyans on financial reform. An independent inquiry led by Lord Woolf will now examine the LSE's links with Libya and will establish guidelines for international donations to the university.