Constitution for the United States - We the People 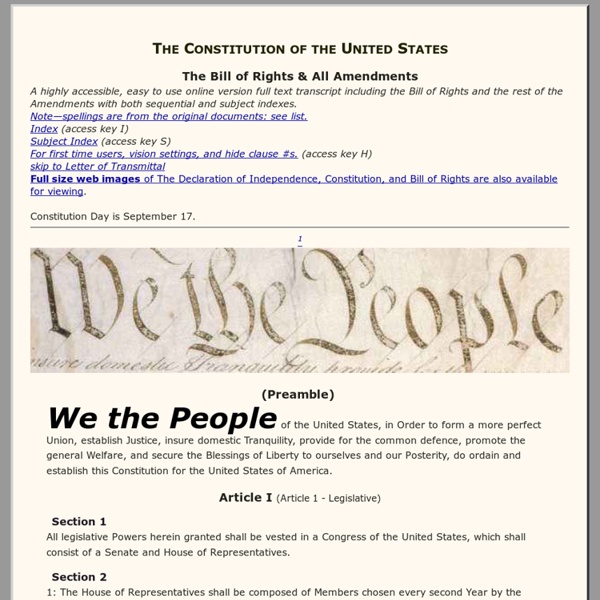 neo-neocon » Blog Archive » Ebola and the great forgetting: the best of times, the worst of times WHO director Margaret Chan said yesterday that the current ebola epidemic is “the most severe, acute health emergency seen in modern times.” On the one hand, I’m happy that WHO is taking the outbreak very seriously. On the other hand, the statement puzzles me. It either indicates a problem that’s merely semantic and involves a disagreement over the definition of a historical term, “modern times,” or it could mean that Chan is ignorant of the history of one of the greatest pandemics the world has ever known, the 1918-1919 influenza strain. If the problem is just a disagreement between Chan and me on what the term “modern times” means, than no harm, no foul, no problem. An early post I wrote on this blog was called “The tsunami and the forgetting.” William Sardo: People didn’t want to believe that they could be healthy in the morning and dead by nightfall, they didn’t want to believe that.Narrator: It was the worst epidemic this country has ever known. Read the whole thing. Dr.

I Knew THE OBAMA’S Had BOTH LOST THEIR LAW LICENSES... But I DIDN’T KNOW WHY UNTIL I READ THIS... I knew they had both lost their law license, but I didn’t know why until I read this. This is 100% legit. I check it out at Stands for Illinois Attorney Registration And Disciplinary Committee. It’s the official arm of lawyer discipline in Illinois ; and they are very strict. (Talk about irony.) Even I, at the advanced age of almost 65, maintain (at the cost of approximately $600/year) my law license that I worked so hard and long to earn. Big surprise. Former Constitutional Law Lecturer and U.S. Consider this: 1. 2 Michelle Obama “voluntarily surrendered” her law license in 1993. after a Federal Judge gave her the choice between surrendering her license or standing trial for Insurance fraud! 3. 4. 5. 6. Source: ; 7. Comments comments

The Constitution of the United States: A Transcription Note: The following text is a transcription of the Constitution as it was inscribed by Jacob Shallus on parchment (the document on display in the Rotunda at the National Archives Museum.) The spelling and punctuation reflect the original. We the People of the United States, in Order to form a more perfect Union, establish Justice, insure domestic Tranquility, provide for the common defence, promote the general Welfare, and secure the Blessings of Liberty to ourselves and our Posterity, do ordain and establish this Constitution for the United States of America. Article. I. Section. 1. All legislative Powers herein granted shall be vested in a Congress of the United States, which shall consist of a Senate and House of Representatives. Section. 2. No Person shall be a Representative who shall not have attained to the Age of twenty five Years, and been seven Years a Citizen of the United States, and who shall not, when elected, be an Inhabitant of that State in which he shall be chosen. Article.

Washington Letter George Washington's Letter to the Hebrew Congregation of Newport Gentlemen: While I received with much satisfaction your address replete with expressions of esteem, I rejoice in the opportunity of assuring you that I shall always retain grateful remembrance of the cordial welcome I experienced on my visit to Newport from all classes of citizens. The reflection on the days of difficulty and danger which are past is rendered the more sweet from a consciousness that they are succeeded by days of uncommon prosperity and security. If we have wisdom to make the best use of the advantages with which we are now favored, we cannot fail, under the just administration of a good government, to become a great and happy people. The citizens of the United States of America have a right to applaud themselves for having given to mankind examples of an enlarged and liberal policy—a policy worthy of imitation. G.

NTSB: Oil Train Crash Risks ‘Major Loss Of Life’ Get Breaking News First Receive News, Politics, and Entertainment Headlines Each Morning. Sign Up WASHINGTON — Warning that a “major loss of life” could result from an accident involving the increasing use of trains to transport large amounts of crude oil, U.S. and Canadian accident investigators urged their governments Thursday to impose new safety rules. The unusual joint recommendations by the U.S. They also recommended stronger efforts to ensure hazardous cargo is properly classified before shipment, and greater government oversight to ensure rail carriers that transport oil are capable of responding to “worst-case discharges of the entire quantity of product carried on a train.” The NTSB also noted that it is still waiting for final action from government regulators on new requirements to improve the safety of tank cars used to transport oil. Last month an oil train derailed and exploded near Casselton, N.D., creating intense fires.

Why Haiti and the Dominican Republic Are So Different The day after a 7.0-magnitude earthquake struck Haiti, Christian televangelist Pat Robertson sparked outrage with his comments on The 700 Club that the nation's history of catastrophes owed to a "pact with the devil" that its residents had made some 200 years ago. How else to explain why Haiti suffers, while the Dominican Republic — which shares the 30,000 sq. mi. of the Caribbean island of Hispaniola — is relatively well-off? "That island of Hispaniola is one island," Robertson said. "The Dominican Republic is prosperous, healthy, full of resorts, et cetera. Haiti is in desperate poverty." Robertson's rationale is more than suspect, yet the differences between the two nations are undeniable. Much of this difference is geographic. When Christopher Columbus arrived in 1492, he named the land La Isla Española. But while both countries struggled with democracy, economically they began to diverge.

CNN crisis actor revealed - Denver Conspiracy What was once thought to be a crisis actor, interviewed multiple times after the Boston Marathon bombings, appears to be a CNN Pentagon Correspondent posing as multiple different witnesses. Most people would agree that they would appreciate being able to trust their local and national news to provide a balanced and honest representation of facts and events. The last few decades, however, has proven that to be virtually impossible to ask for. Despite what is typically a polished and professional appearance, constant reminders of a blatant disregard for old-time journalistic standards and what now seems to be a perma-lean toward the establishment, at the expense of the people and its grassroots, has long since destroyed the believability of almost anything stated on major radio or television. Perhaps nothing epitomizes the circumstances better than a 2003 story from the, you–can't–make–this–stuff–up, stack of news. Ladies and gentlemen, meet CNN Pentagon Correspondent, Barbara Starr.

The Constitution The Constitution of the United States of America is the supreme law of the United States. Empowered with the sovereign authority of the people by the framers and the consent of the legislatures of the states, it is the source of all government powers, and also provides important limitations on the government that protect the fundamental rights of United States citizens. Why a Constitution? The need for the Constitution grew out of problems with the Articles of Confederation, which established a “firm league of friendship” between the states, and vested most power in a Congress of the Confederation. A movement to reform the Articles began, and invitations to attend a convention in Philadelphia to discuss changes to the Articles were sent to the state legislatures in 1787. The Constitutional Convention Much of the debate, which was conducted in secret to ensure that delegates spoke their minds, focused on the form that the new legislature would take. Ratification The Bill of Rights

Leftists become incandescent when reminded of the socialist roots of Nazism You can't accuse the NSDAP of downplaying the "Socialist" bit On 16 June 1941, as Hitler readied his forces for Operation Barbarossa, Josef Goebbels looked forward to the new order that the Nazis would impose on a conquered Russia. There would be no come-back, he wrote, for capitalists nor priests nor Tsars. Rather, in the place of debased, Jewish Bolshevism, the Wehrmacht would deliver “der echte Sozialismus”: real socialism. Goebbels never doubted that he was a socialist. So total is the cultural victory of the modern Left that the merely to recount this fact is jarring. It is now clear beyond all reasonable doubt that Hitler and his associates believed they were socialists, and that others, including democratic socialists, thought so too. The clue is in the name. Marx’s error, Hitler believed, had been to foster class war instead of national unity – to set workers against industrialists instead of conscripting both groups into a corporatist order. What is it based on, this connection?

The Age of Bad Holocaust Novels: Adam Kirsch Reviews John Donoghue's 'The Death's Head Chess Club' When Theodor Adorno made his famous pronouncement about there being no poetry after Auschwitz, he was thinking about good poetry. Art that successfully transforms reality, elevating it to a plane of harmony and permanence, can only be a falsification of an experience as violent and inhuman as the Holocaust. In time, however, writers emerged who showed that a different kind of art can do some kind of justice to horror—an art not of beauty and transformation, but of fragmentation and austere witness. The poetry of Paul Celan, the prose of Elie Wiesel or Primo Levi, created the style we still associate with authentic writing about the Holocaust. That style renounces beauty and cleverness in the name of more sustaining values like humility and truth. Not coincidentally, all of those writers were themselves victims and survivors of Nazism; for them, the Holocaust was not just another literary subject, but the central truth of their lives. The answer, in this case, is that it doesn’t.

Supreme Court Positioned To Repeal 4th Amendment Earlier this week, the Supreme Court heard oral arguments in Navarette v California, a case in which a wrong decision will effectively repeal the 4th Amendment rights of the American people. The text of the 4th Amendment reads: The right of the people to be secure in their persons, houses, papers, and effects, against unreasonable searches and seizures, shall not be violated, and no Warrants shall issue, but upon probable cause, supported by Oath or affirmation, and particularly describing the place to be searched, and the persons or things to be seized. In 1968, the Supreme Court ruled that “…law enforcement may perform a search when they have a reasonable suspicion of criminal activity, even if it falls short of probable cause necessary for an arrest.” This reasonable suspicion standard created by the court has provided police the necessary “legal” authority to perform searches in violation of 4th Amendment language.