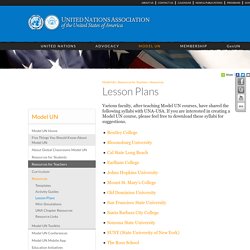 Advocacy AgendaFind a ChapterModel UNHuman RightsUNA-USA/Seton Hall Study ProgramUpcoming Events. IMUNA 2017. The theme of the XXIV Annual Session of the International Model United Nations of Alkmaar will be "International Trade" Since we will be addressing International Trade during our upcoming conference, the issues will be angled towards all kinds of trade known to the world. 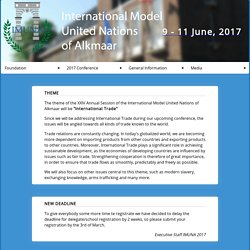 Trade relations are constantly changing. In today's globalized world, we are becoming more dependent on importing products from other countries and exporting products to other countries. Moreover, International Trade plays a significant role in achieving sustainable development, as the economies of developing countries are influenced by issues such as fair trade. Strengthening cooperation is therefore of great importance, in order to ensure that trade flows as smoothly, predictably and freely as possible. We will also focus on other issues central to this theme, such as modern slavery, exchanging knowledge, arms trafficking and many more. Executive Staff IMUNA 2017 The first mailing has been sent. MUN Conference Map. Guide to Parliamentary Procedure - Model United Nations. Being familiar with parliamentary procedure is an essential element to succeeding at any Model UN conference. 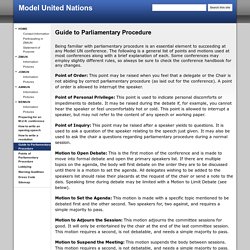 The following is a general list of points and motions used at most conferences along with a brief explanation of each. Some conferences may employ slightly different rules, so always be sure to check the conference handbook for any changes. Point of Order: This point may be raised when you feel that a delegate or the Chair is not abiding by correct parliamentary procedure (as laid out for the conference). A point of order is allowed to interrupt the speaker. Point of Personal Privilege: This point is used to indicate personal discomforts or impediments to debate. Point of Inquiry: This point may be raised after a speaker yields to questions. 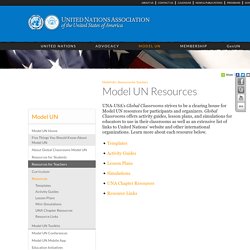 Advocacy AgendaFind a ChapterModel UNHuman RightsUNA-USA/Seton Hall Study ProgramUpcoming Events Members receive access to a range of exclusive benefits such as events at the UN and across the United States, as well as opportunities to advocate, host Model UN conferences, and connect young professionals to UN experts. Join UNA-USAFor MembersModel UN ResourcesAdvocacy ResourcesYoung ProfessionalsStudent AllianceCouncil of Organizations. Model UN Glossary. Model UN can be confusing to a beginner, not only because of the complexity of the issues and the pace of debate, but because of the strangeness of the language. 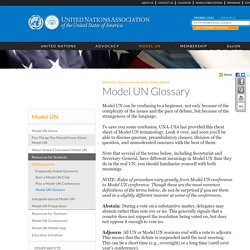 To save you some confusion, UNA-USA has provided this cheat sheet of Model UN terminology. Look it over, and soon you'll be able to discuss quorum, preambulatory clauses, division of the question, and unmoderated caucuses with the best of them. Note that several of the terms below, including Secretariat and Secretary-General, have different meanings in Model UN than they do in the real UN; you should familiarize yourself with both meanings. The Hague - MINIMUN. MINIMUN is a one-day, THIMUN-organised, conference in which students can gain experience in debating world issues in General Assembly committees as well as in the Security Council and ECOSOC. 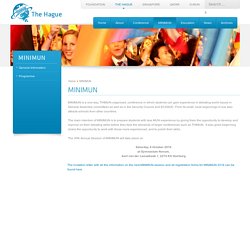 From its small, local beginnings it now also attracts schools from other countries. The main intention of MINIMUN is to prepare students with less MUN experience by giving them the opportunity to develop and improve on their debating skills before they face the demands of larger conferences such as THIMUN. It also gives beginning chairs the opportunity to work with those more experienced, and to polish their skills. The 30th Annual Session of MINIMUN will take place on Saturday, 8 October 2016 at Gymnasium Novum, Aart van der Leeuwkade 1, 2274 KX Voorburg. 5 Sports Tips for Training Your Model UN Team. This was a question I received from several advisors I met during at past weekend’s Stanford MUN Conference.

They explained that, once they received the country assignments for their next conference, they could start assigning students to committees and help them with research and speeches. But in the meantime, what should advisors teach? In other words, how do you prepare your students for their next conference before they know their country and committee? MUN Made Easy: How to Get Started with Model United Nations. Congratulations! 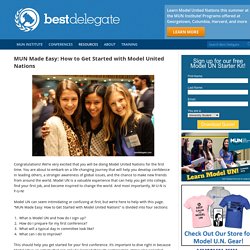 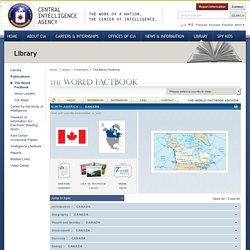 Northern North America, bordering the North Atlantic Ocean on the east, North Pacific Ocean on the west, and the Arctic Ocean on the north, north of the conterminous US Geographic coordinates: This entry includes rounded latitude and longitude figures for the centroid or center point of a country expressed in degrees and minutes; it is based on the locations provided in the Geographic Names Server (GNS), maintained by the National Geospatial-Intelligence Agency on behalf of the US Board on Geographic Names. Map references: This entry includes the name of the Factbook reference map on which a country may be found.

Note that boundary representations on these maps are not necessarily authoritative. The entry on Geographic coordinates may be helpful in finding some smaller countries. Area: This entry includes three subfields. Best Delegate: Model United Nations. MUNISH 2016.