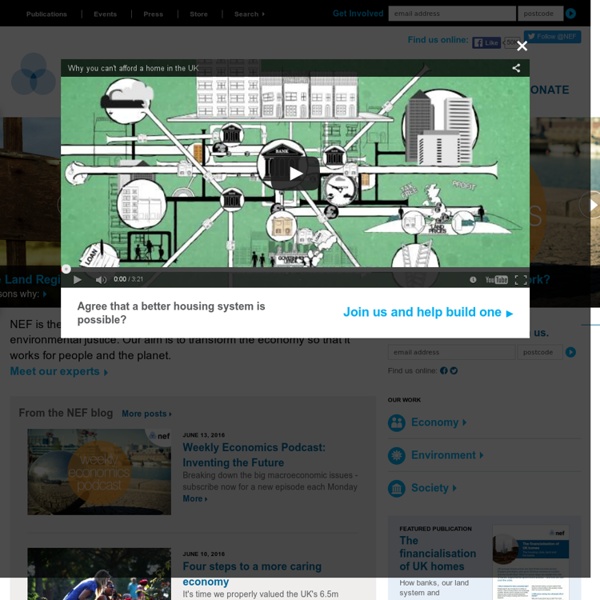 The Economics of Happiness (2011) Economic globalization has led to a massive expansion in the scale and power of big business and banking. It has also worsened nearly every problem we face: fundamentalism and ethnic conflict; climate chaos and species extinction; financial instability and unemployment. There are personal costs too. For the majority of people on the planet life is becoming increasingly stressful. We have less time for friends and family and we face mounting pressures at work. The Economics of Happiness describes a world moving simultaneously in two opposing directions.

An Integrative Approach to Quality of Life Measurement, Research, and Policy 1Enhancing Quality of Life (QOL) has long been a major explicit or implicit life-style and policy goal for individuals, communities, nations, and the world (Schuessler and Fisher, 1985; Sen 1985). But defining QOL and measuring progress towards improving it have been elusive. Currently, there is renewed interest in this issue both in the academic and popular press. A search of the Institute for Scientific Information (ISI) database from 1982-2005 reveals over 55,000 academic citations utilizing the term “quality of life,” spanning a large range of academic disciplines.

News « Econ4 Fast Company (fastcoexist.com) reports on Econ4: “We’re economists: we want to promote not only the supply of new economics teaching but also student demand for it.” Read the story and accompanying interview here. The Wall Street Journal, reporting on the American Economics Association’s recent decision to require economists to disclose potential conflicts of interest, quotes Econ4′s George DeMartino and Gerald Epstein, leading advocates of uploading ethics into the profession. George DeMartino, a University of Denver professor who headed the panel, has argued for the adoption of an even broader “economists’ oath” that would address questions like the ethics of advising dictators and the responsibility of economists to stand up for the poor.Gerald Epstein, a professor at the University of Massachusetts at Amherst who has previously criticized economists’ lack of disclosure, in an email called the policy “a very big step forward.” Read the story here.

Michael Renner Michael Renner is a Senior Researcher at the Worldwatch Institute. His work has principally focused on two topics—the connections between environment and employment (green jobs/green economy), and linkages between the environment and peace and conflict. Michael currently serves as co-director, with Tom Prugh, of the forthcoming 2014 edition of State of the World (focused on governance for sustainability). Previously, he co-managed with Erik Assadourian the 2012 edition. He also manages the Institute's Vital Signs series, an online and print publication.

Economic Growth Is Killing Us (Image via Shutterstock)Help Truthout continue producing grassroots journalism and publishing visions for a brighter future throughout 2014 and beyond. Click here to make a tax-deductible donation! We immediately require an economic and political governance structure that ensures all human beings have access to basic necessities while simultaneously reducing human pressure on the biosphere. We are illusionists. There is very little that is physical in the world we've created and made ourselves to believe.

Basic Income Gathers Steam Across Europe Barcelona. In the last few months basic income—an unconditional cash payment to every member of the population—has been getting more and more attention in the media and social networks. Three items are especially interesting. First, Yanis Varoufakis, the able Greek economist, Minister for Finance in the first Syriza government and well known for his trenchant opposition to Troika austerity measures bashing the poor and already vulnerable majority of the population, has become such a media star that every time he gives an opinion on political economy, some theoretical aspect of economics or economic policy, his words are widely disseminated. Hence, his remarks on basic income, which he described as “a necessity” at the Future of Work conference in Zurich on 5 May 2016, are of no small import. In a filmed talk lasting half an hour Varoufakis, incisive and original as always, reframed the debate.

Genuine progress indicator Genuine Progress Indicator, or GPI, is a metric that has been suggested to replace, or supplement, gross domestic product (GDP) as a measure of economic growth. GPI is designed to take fuller account of the health of a nation's economy by incorporating environmental and social factors which are not measured by GDP. For instance, some models of GPI decrease in value when the poverty rate increases.[1] The GPI is used in green economics, sustainability and more inclusive types of economics by factoring in environmental and carbon footprints that businesses produce or eliminate. "Among the indicators factored into GPI are resource depletion, pollution, and long-term environmental damage.

WIR Bank WIR Bank logo The WIR Bank, formerly the Swiss Economic Circle (GER: Wirtschaftsring-Genossenschaft), or WIR, is an independent complementary currency system in Switzerland that serves businesses in hospitality, construction, manufacturing, retail and professional services. WIR issues and manages a private currency, called the WIR Franc, which is used, in combination with Swiss Franc to generate dual-currency transactions. The WIR Franc is an electronic currency reflected in clients' trade accounts and there is no paper money. The use of this currency results in increased sales, cash flow and profits for a qualified participant. WIR has perfected the system by creating a credit system which issues credit, in WIR Francs, to its members.

Moving toward a circular economy The circular economy aims to eradicate waste—not just from manufacturing processes, as lean management aspires to do, but systematically, throughout the life cycles and uses of products and their components. Indeed, tight component and product cycles of use and reuse, aided by product design, help define the concept of a circular economy and distinguish it from the linear take–make­–dispose economy, which wastes large amounts of embedded materials, energy, and labor. In the first exhibit of this narrated slideshow, McKinsey alumnus Markus Zils explains how a circular economy works. In the second, he uses the example of a market for power drills to detail four scenarios in which circular-economy principles are applied: In the status-quo scenario, 1,000 power drills are made in China and sold in the European Union. In the refurbishment scenario, 800 drills are sold at the original price, and 200 are refurbished and sold at 80 percent of it.

Introduction What is degrowth actually about? Degrowth is a perspective and an emerging social movement, which in the last few years brought together a multitude of projects and ongoing debates around alternative economies. The main idea of degrowth is an economy and society which aims for the well-being of all and for ecological sustainability. One key conviction is that social and ecological global justice can only be achieved when the destructive economic activities of the global North are reduced. Degrowth criticises the current framework of society, which always calls for “higher, faster, further”, as well as connected phenomena like acceleration, excessive demands, marginalization and the destruction of the global ecosystem. A fundamental change in the growth-oriented methods of production and ways of life as well as an extensive cultural change are thus considered necessary.