Yes, ‘Citizens United’ gives Republicans an electoral edge. Here’s proof. Attendees hold signs as they listen to speakers during a rally to mark the fifth anniversary of the Supreme Court's Citizens United decision at Lafayette Square in Washington last year. 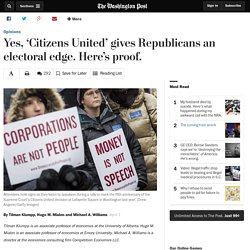 (Drew Angerer/Getty Images) By Tilman Klumpp, Hugo M. Mialon and Michael A. Williams April 7 Tilman Klumpp is an associate professor of economics at the University of Alberta. In January 2010, the Supreme Court issued its decision in Citizens United v. As the country gets set to elect its next president, along with 435 representatives, 34 senators and thousands of state and local office holders, what do we know about the effects of independent political spending in elections?

Legalize Democracy (2014. Move to Amend Documentary. THE UNITED STATES CONSTITUTION - We the People. Amended by Article XIII Section 1. People as Property 1971 Art 4 Sec 2.3. 1830, Indian Removal Act. The Indian Removal Act was a law passed by Congress on May 28, 1830, during the presidency of Andrew Jackson. 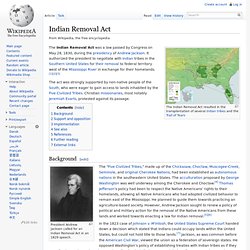 It authorized the president to negotiate with Indian tribes in the Southern United States for their removal to federal territory west of the Mississippi River in exchange for their homelands.[1][2][3] 1854, People v. Hall. The ruling effectively freed Hall, a white man, who had been convicted and sentenced to death for the murder of Ling Sing, a Chinese miner in Nevada County. 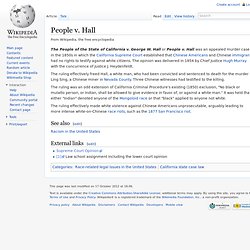 Three Chinese witnesses had testified to the killing. The ruling was an odd extension of California Criminal Procedure's existing (1850) exclusion, "No black or mulatto person, or Indian, shall be allowed to give evidence in favor of, or against a white man. " It was held that either "Indian" denoted anyone of the Mongoloid race or that "black" applied to anyone not white. The ruling effectively made white violence against Chinese Americans unprosecutable, arguably leading to more intense white-on-Chinese race riots, such as the 1877 San Francisco riot. See also[edit] 1857, Dred Scott v. Sandford. Dred Scott v. 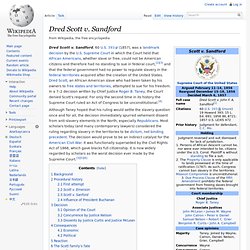 Sandford, 60 U.S. 393 (1857), was a landmark decision by the U.S. Supreme Court in which the Court held that African Americans, whether slave or free, could not be American citizens and therefore had no standing to sue in federal court,[2][3] and that the federal government had no power to regulate slavery in the federal territories acquired after the creation of the United States. Dred Scott, an African American slave who had been taken by his owners to free states and territories, attempted to sue for his freedom.

In a 7–2 decision written by Chief Justice Roger B. A letter from a freed man to his former slave owner. To make up for the fact the Jenny the Whiteboard Woman is probably a fake, I bring an even better kiss-off to a former "employer"—a letter, reportedly dictated to a letter-writer in 1865 by one Jordan Anderson, former slave and then-current stableman, to former slave owner P.H. 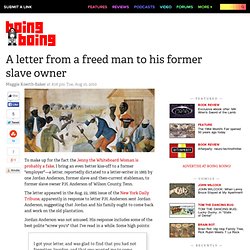 Anderson of Wilson County, Tenn. The letter appeared in the Aug. 22, 1865 issue of the New York Daily Tribune, apparently in response to letter P.H. Anderson sent Jordan Anderson, suggesting that Jordan and his family ought to come back and work on the old plantation. Jordan Anderson was not amused. His response includes some of the best polite "screw you's" that I've read in a while.

I got your letter, and was glad to find that you had not forgotten Jourdon, and that you wanted me to come back and live with you again, promising to do better for me than any body else can. The Homestead Act of 1862. Background On January 1, 1863, Daniel Freeman, a Union Army scout, was scheduled to leave Gage County, Nebraska Territory, to report for duty in St. 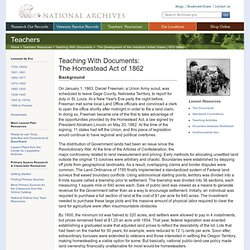 Homestead Acts, wikipedia. The first of the acts, the 'Homestead Act of 1862, was signed into law by President Abraham Lincoln on May 20, 1862. 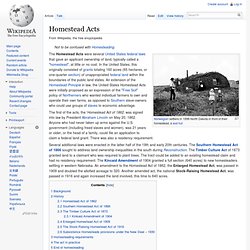 Anyone who had never taken up arms against the U.S. government (including freed slaves and women), was 21 years or older, or the head of a family, could file an application to claim a federal land grant. There was also a residency requirement. Several additional laws were enacted in the latter half of the 19th and early 20th centuries. The Immigration Act of 1924 (The Johnson-Reed Act) - 1921–1936 - Milestones - Office of the Historian. The Immigration Act of 1924 (The Johnson-Reed Act) Introduction. 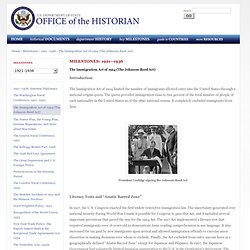 Immigration Act of 1924. President Coolidge signs the immigration act on the White House South Lawn along with appropriation bills for the Veterans Bureau. 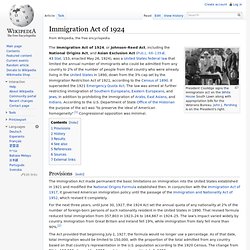 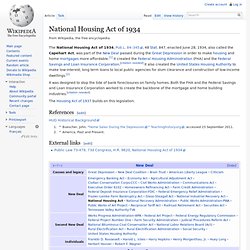 [citation needed] It also created the United States Housing Authority to make low-interest, long term loans to local public agencies for slum clearance and construction of low-income dwellings.[2] It was designed to stop the tide of bank foreclosures on family homes. Both the FHA and the Federal Savings and Loan Insurance Corporation worked to create the backbone of the mortgage and home building industries. [citation needed] Redlining, wikipedia. A HOLC 1936 security map of Philadelphia showing redlining of lower income neighborhoods.[1] Households and businesses in the red zones could not get mortgages or business loans.

Reverse redlining occurs when a lender or insurer targets minority consumers, not to deny them loans or insurance, but rather to charge them more than could be charged to a comparable majority consumer whose business is more sought after.[8][9] History[edit] Although informal discrimination and segregation had always existed in the United States, the specific practice called "redlining" began with the National Housing Act of 1934, which established the Federal Housing Administration (FHA).[10] Racial segregation and discrimination against minorities and minority communities pre-existed this policy. On the maps, the newest areas — those considered desirable for lending purposes — were outlined in blue and known as "Type A". Housing Segregation, wikipedia. Housing Segregation is the practice of denying African American or other minority groups equal access to housing through the process of misinformation, denial of realty and financing services, and racial steering.

The U.S. government ordered the internment in 1942, shortly after Imperial Japan's attack on Pearl Harbor.[2][3] The internment of Japanese Americans was applied unequally as a geographic matter: all who lived on the West Coast were interned, while in Hawaii, where 150,000-plus Japanese Americans comprised over one-third of the population, only 1,200[4] to 1,800 were interned. Sixty-two percent of the internees were American citizens.[5][6] President Franklin D. Roosevelt authorized the internment with Executive Order 9066, issued February 19, 1942, which allowed local military commanders to designate "military areas" as "exclusion zones," from which "any or all persons may be excluded.

" After Pearl Harbor[edit] Japanese Canadian internment. Beginning after the attack on Pearl Harbor on December 7, 1941, and lasting until 1949 (four years after World War II had ended) all persons of Japanese heritage were systematically removed from their homes and businesses and sent to internment camps. The Canadian government shut down all Japanese-language newspapers, took possession of businesses and fishing boats, and effectively sold them. In order to fund the internment itself, vehicles, houses and personal belongings were also sold.[3] In August 1944, Prime Minister Mackenzie King announced that Japanese Canadians were to move east as had been previously encouraged. Prewar history[edit] Tensions between Canadians and Japanese immigrants to Canada existed long before the outbreak of World War II.