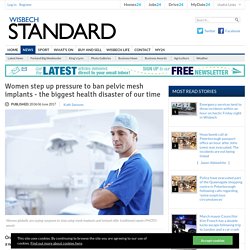 Kate Langley shares with us her experience of a day-case operation to fix incontinence. Health - The vaginal tape scandal putting women's health in danger. “If this hadn’t happened to me, and someone told me about it, I’m not sure I would have believed them. 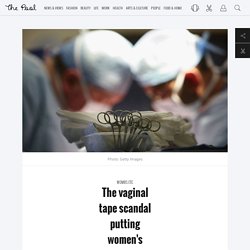 It’s like a bizarre horror story.” We’re 36 seconds into our conversation and Kath Sansom has already reached 200 words per minute. She has unwittingly become the face of the latest scandal in women’s health – and she is desperate to be heard. Kath is one of thousands of women in the UK – and all over the world – speaking up about transvaginal tapes, often made of mesh, being used in NHS surgical procedures. Leaked documents show a powerful patient safety group wants to keep the mesh implant scandal hidden - News - Cambs Times. PUBLISHED: 12:47 19 April 2017 | UPDATED: 12:47 19 April 2017 John Elworthy Campaigners from Sling The Mesh are hoping leaked documents will reveal the hidden scandal that is mesh implants. 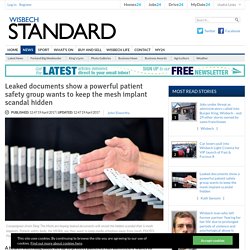 Patient safety body, the MHRA, say they want to keep media attention away from mesh. PHOTO: Pixabay Archant. Concerns over vaginal mesh implants. 19th April 2017 – Hundreds of women are reported to be suing the NHS because of severe pain and disability caused by vaginal mesh implants The implants are used to treat urinary incontinence and pelvic organ prolapse after childbirth. 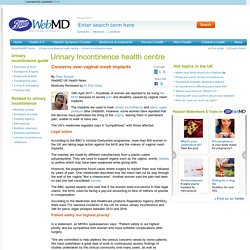 However, some women have reported that the devices have perforated the lining of the vagina, leaving them in permanent pain, unable to walk or have sex. The UK's medicines regulator says it "sympathises" with those affected. Legal action According to the BBC's Victoria Derbyshire programme, more than 800 women in the UK are taking legal action against the NHS and the makers of vaginal mesh implants. The meshes are made by different manufactures from a plastic called polypropylene. However, the programme found cases where surgery to implant them was followed by years of pain. The BBC quoted experts who said that if the women were successful in their legal claims, the NHS could be facing a pay-out amounting to tens of millions of pounds in compensation. 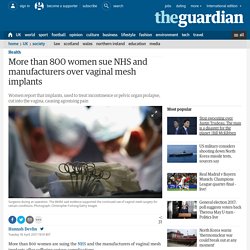 Some women reported that implants had cut into their vaginas, with one woman saying she was left in so much pain that she considered suicide. Others have been left unable to walk or have sex, according to the BBC. However, the medical regulator said that the best current evidence supports the continued use of mesh implants to resolve health conditions that could themselves cause serious distress to patients. The implants are used to treat incontinence after childbirth or pelvic organ prolapse, where the womb or bladder bulge against the walls of the vagina. Between April 2007 and March 2015, more than 92,000 women had vaginal mesh implants in England, NHS data shows. Claire Cooper began to experience pain three years after her operation. When the pain continued, she said a GP told her she was imagining it. Vaginal mesh implants: Hundreds sue NHS over 'barbaric' treatment. More than 800 UK women are taking legal action against the NHS and the makers of vaginal mesh implants, the Victoria Derbyshire programme has learned. 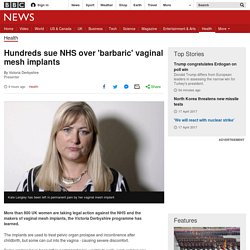 The implants are used to treat pelvic organ prolapse and incontinence after childbirth, but some can cut into the vagina - causing severe discomfort. Some women have been left in permanent pain, unable to walk, work or have sex. One called the implants "barbaric". The UK regulatory body MHRA said it "sympathises" with the women affected. 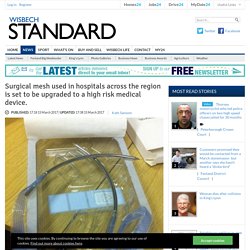 AAAARGHHH It's got TEETH - Photo-Features. As I watched TV, I felt my eyelids growing heavy. 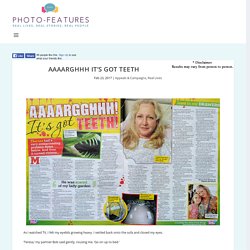 I settled back onto the sofa and closed my eyes. ‘Teresa,’ my partner Bob said gently, rousing me. ‘Go on up to bed.’ ‘Have I fallen asleep again?’ I yawned, rubbing my eyes. Ask for traditional surgery rather than pelvic mesh implants, says study out this week - News - Cambs Times. 14:04 22 December 2016 Kath Sansom Sling the Mesh campaign logo by March-based artist Michelle Deyna Hayward. 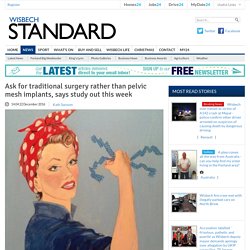 Sling the Mesh was launched in England in June 2015 by Archant Newspapers journalist Kath Sansom Archant Mesh implants to fix pelvic organ prolapse have higher risks than traditional surgery but no extra benefits, according to a report released this week. Campaigner calls for operation to cure incontinence after childbirth to be suspended. ITV News 8/9/2016 - Mark Slack interview. ‘A tragedy created by greed’. Mounting pressure for a women’s mesh sling operation to be withdrawn - News - Cambs Times. 20:27 29 August 2016 Kath Sansom Dr Mark Slack, head of gynaecoloyg at Addenbrooke's Hospital, Cambridge Archant A third American state is suing the makers of a pelvic mesh sling which is the most commonly used brand in UK hospitals. 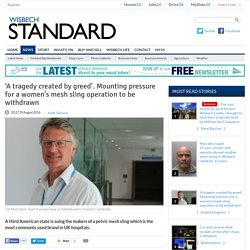 A TVT pelvic mesh kit. Animals cannot tell researchers about the pain from mesh experiments - report into implants used in NHS women’s operations is criticised - News - Cambs Times. Mesh mini slings cause “serious complications” and research into their use is “disappointing” says report by NICE - News - Cambs Times. 17:39 21 June 2016 Kath Sansom Kath Sansom has launched a campaign against a gynaecology operation in which a TVT sling is used.

Picture: HELEN DRAKE. The story of Sling The Mesh journalist is used to educate surgeons around the world in a cutting edge gynaecology conference - News - Cambs Times. 16:20 28 May 2016 Kath Sansom Natalia Price speaking at the RCOG World Conference with Kath's Daily Mail article on the screen in the background. ‘It was like being stabbed with a shard of glass’: Woman left in a wheelchair after controversial incontinence surgery that’s destroyed thousands of lives. A WOMAN was left needing a wheelchair for months after suffering severe side effects from incontinence surgery. Karen Griffiths, 51, began suffering problems with her bladder after she had children. The mother opted for a transvaginal tape (TVT), which is a mesh that is put below the bladder to help keep the internal organs in place so aiding stress incontinence.

Far from helping her situation the treatment left her in severe pain, with claims TVT is flawed. The tape can come apart, with segments of it making their way into tissue in the body. This has been dubbed "the cheesewire effect" thanks to the harsh cuts that are caused internally, and it's what happened to Karen. MP Owen Smith, Welsh shadow work and pensions secretary: ‘In six years this is the worst medical issue I have come across’ - News - Cambs Times.

14:48 29 January 2016 Kath Sansom Reporter Kath Sansom of Slling The Mesh Picture: HELEN DRAKE Archant Concerns surrounding a women’s operation reached Parliament when a meeting heard about lives ruined in surgery that was supposed to be a simple fix for an embarrassing problem. <span id="js-error">You currently have JavaScript disabled, functionality will be limited</span> NHS admits women have not always had the best care in mesh sling incontinence operations - News - Cambs Times. 17:12 05 December 2015 Kath Sansom Sling The Mesh campaign Archant The NHS has admitted it has not been working with enough information about mesh used in operations to fix incontinence suffered by women. A leading surgeon, brought in to oversee a mesh working group, said that women deserved the best possible advice and care but they had not always received it. ‘It was the worst mistake I ever made’ We Trust the Medical Profession to Get It Right, But the TVT Mesh Procedure Leaves Some Women Maimed for Life

Campaigners delighted about a report that shows mesh, used by surgeons in hospitals across Cambridgeshire, degrades while inside the body. Rangeworthy bride urges women to Sling the Mesh after having excruciating bladder sling fitted (From Gazette Series) Mesh surgery scandal: Doctor hired to lead mesh probe used to work for manufacturers. Sling the Mesh: Kath’s campaign gathers support from around the world in its first week - News - Cambs Times. Cambs Times reporter in bid to halt medical procedure.

A regional journalist who claimes she was left a “physical wreck” as a result of a medical procedure has launched a campaign for such operations to be halted. Kath Sansom, a reporter for weekly titles the Cambs Times, Wisbech Standard and Ely Standard, has launched her Sling The Mesh drive after she underwent an operation to have what is known as a TVT mesh sling for bladder problems, following childbirth. Since having the procedure in March, Kath says she has gone from an active mother of two to someone who struggles with daily pain. The campaign, which also featured on the front page of Archant sister title the Royston Crow, calls for the operation to be suspended, or for a national register to be launched to track future problems.

Around 13,000 of the operations are carried out on the NHS each year. Kath wants to see the risks fully explained to women, and for government to tighten up legislation on passing medical devices. “It has potentially life-changing disabling consequences. Royston woman left in agony after surgery backs calls for procedure to be suspended - News - Royston Crow. 08:32 04 June 2015. Victory for the Mail on surgery that left thousands in agony: Hospitals ordered to warn patients over incontinence operation that can go cruelly wrong. By John Naish Published: 01:35 GMT, 24 December 2013 | Updated: 01:35 GMT, 24 December 2013 'The surgeon told me it would be uncomplicated, with no major risks,' said Karen Russell Before Karen Russell would agree to an operation in 2007 to remedy the incontinence she had suffered since having babies, she wanted assurance that the procedure was low-risk, and that she would have no problems walking her two children to and from school.

‘The surgeon told me it would be uncomplicated, with no major risks,’ recalls Karen, 44, a housewife from Peterborough. But, in fact, the op, which used a treatment called transvaginal tape (TVT) — a mesh implanted under the bladder like a hammock to treat incontinence by supporting the internal organs — had such terrible consequences that she was left in agony and used a wheelchair for five years. Injured by Mesh Implant by Suki Mann. Be the first to like this update 01/18/2015 by Suki Mann Dr Shlomo Raz M.D. Pensioner joins campaign to ban operation after being left in 'intense' pain. Sling The Mesh TVT TVTO. TVT BBC SOUTH EAST NEWS 19th June 2015. Sussex women back calls for mesh implant surgery ban. Thalidomide victims back mesh campaigners in bid to seek compensation and force safety probe.