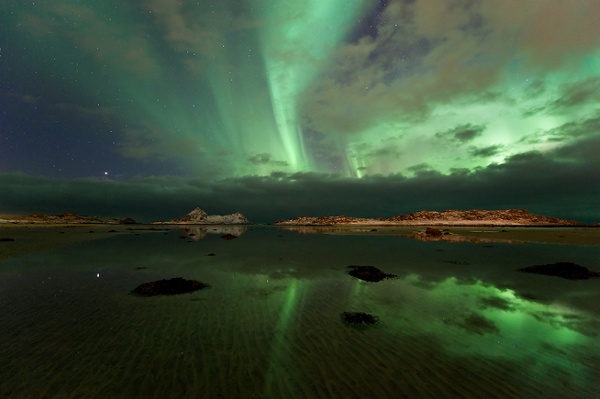 The Winding Path, a photo from Zuid Holland, South Critiques | Translate v_vicky Hello Pepijn, it seems like a path from a fairytale!! I like the colours and the atmosphere. Bravo! Sequoia, Redwood - The Ancient Giants Sequoia, Redwood: Giant Sequoia trees Giant Sequoia trees, Mariposa Grove, Yosemite National Park, California We published this article back on Sep. 20, 2010 but we love Sequoia so much we decided to re-publish it. Hope you enjoy. California’s enormous giant sequoia is the world’s most massive tree and one of the oldest.

Water under the bridge: Crystal clear river is so clean you can see 50ft to the bottom By Suzannah Hills Published: 14:55 GMT, 5 April 2012 | Updated: 06:49 GMT, 6 April 2012 A crystal clear river is so clean that the 50ft deep riverbed can be seen from a bridge crossing over the water. Preikestolen – an amazing Norwegian attraction « BLOGNATOR Preikestolen or Prekestolen, also known by the English translations of Preacher’s Pulpit or Pulpit Rock, is a giant cliff 604 metres (1982 feet) above Lysefjorden, in Ryfylke, Norway. The top of the cliff is approximately 25 by 25 metres (82 by 82 feet) square and almost flat, and is a famous tourist attraction in Norway. During the four summer months of 2009, approximately 130,000 people took the 3.8 km hike to Preikestolen, making it one of the most visited natural tourist attractions in Norway. A trip to Preikestolen from the closest car park and Norwegian Mountain Touring Associations-staffed refuge, Preikestolen fjellstue, takes about 3-4 hours for a round trip hike. The parking facility and hut are about one hour from the city of Stavanger by ferry and car.

Nature photography by Patrick Zephyr Posted on March 17, 2011 in Photography If you’re new here, you may want to subscribe to our RSS feed or follow us on Facebook or Twitter . Thanks for visiting! Rate this Post (1 votes, average: 5.00 out of 5) Loading ... 32 Pictures To Help You Appreciate The Awesomeness Of Nature October 12, 2010 | 136 Comments » | Topics: Awesome, Nature Hot Stories From Around The Web Other Awesome Stories High Speed Liquid and Bubble Photographs by Heinz Maier It never ceases to amaze me: just when I think I’ve seen every possible permutation of an artform or technique—be it figurative sculpture, stop motion animation, or in this case, high speed photography—somebody comes along and manages to do something radically different. German photographer Heinz Maier says that he began taking photographs less than a year ago in late 2010. He claims to not know what direction he’s heading in just yet, right now he’s experimenting with macro photography, mostly insects, animals, and these delicate high speed water droplets. Personally, I think he’s found a great direction. There are so many things happening here to make these photographs simply outstanding: the lighting, the colors, the occasional use of symmetry in the reflection of water, let alone the skill of knowing how to use the camera itself.

Stunning Self-Portraits by a 17-Year-Old (18 photos) Like Valerie Chiang or Kalie Garrett, Alex Stoddard is one of those talented teenage photographers who knows how to express themselves. His self-portraits are all incredibly unique and after viewing them you're left wondering where he's going to take you next. What I enjoy most is that you can almost feel his passion come through. His commitment to not only executing on an idea but doing it well, is apparent to anyone who sees his photos. Awe-inspiring scenes from Mother Nature Summer is the perfect time to get out and see how much nature has to offer. Photo from EarthAirFire You Might Also Like: Comments: Leave a reply: