21 Places To See Before You Die 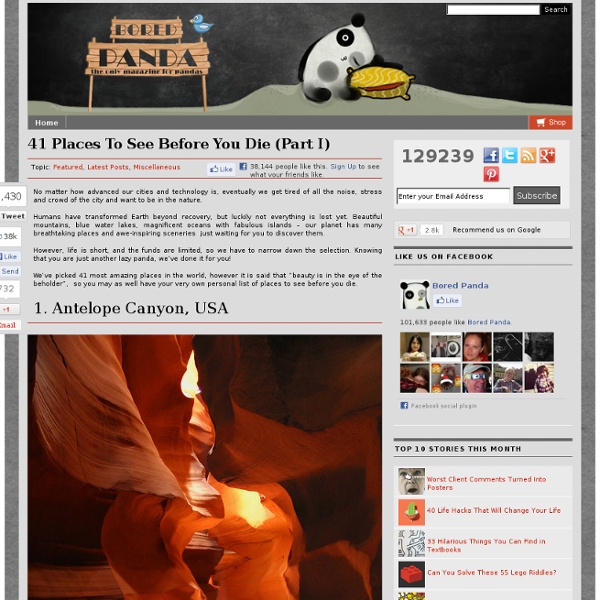 No matter how advanced our cities and technology is, eventually we get tired of all the noise, stress and crowd of the city and want to be in the nature. Humans have transformed Earth beyond recovery, but luckily not everything is lost yet. Beautiful mountains, blue water lakes, magnificent oceans with fabulous islands – our planet has many breathtaking places and awe-inspiring sceneries just waiting for you to discover them. However, life is short, and the funds are limited, so we have to narrow down the selection. Knowing that you are just another lazy panda, we’ve done it for you! We’ve picked 41 most amazing places in the world, however it is said that “beauty is in the eye of the beholder”, so you may as well have your very own personal list of places to see before you die. 1. Bamboos for: James Marvin Phelps , Rob Inh00d Antelope Canyon is the most-visited and most-photographed slot canyon in the American Southwest. 2. Bamboos for: Jo@net , Goianobe , CX15 3. 4. 5. 6. 7. 8. 9. 10. 11.

Plitvice, a watery paradise in Croatia - StumbleUpon In recent years, Croatia has changed from a relative unknown to one of the trendiest destinations in Europe. To a great extent this is due to the country's rocky littoral, which, washed by the Adriatic, is considered one of the most beautiful of the Mediterranean coastlines. Then there is the rich history and cultural heritage of medieval towns such as Dubrovnik, Split and Sibenik.

Honest Logos by Viktor Hertz We’ve already laughed at the Top 15 Worst Logo FAILS Ever, tried to find hidden objects in 30 Clever Logos With Hidden Symbolism and even learned some history from 21 Logo Evolutions of the World’s Well Known Logo Designs, but we’ve never looked at what would happen if companies created honest logos. Viktor Hertz, a freelance Graphic Designer from Sweden, finally did it – he turned well known logos into “Honest Logos”. “An idea for a series with honest logos, revealing the actual content of the company, what they really should be called. Some are cheap, some might be a bit funny, some will maybe be brilliant. 15 Photos Of Most Dangerous Walkway in the World Did you ever seen such a dangerous walkway..?? El Caminito del Rey (also known as The King’s Walkway) can be considered most dangerous walkway in the world. El Caminito del Rey was built in 1901 as a connection between the power plants of Chorro Falls and Gaitanejo Falls. It took four years to finish and in 1905 Alfonso XIII, King of Spain, crossed the walkway for the inauguration, thus giving it its name, The King’s Walkway. Built along the steep walls of a narrow gorge, in the Malaga region, El Caminito del Rey has deteriorated severely in the last years and after four people died crossing it, in 1999 and 2000, the authorities decided to close it off to tourists.

Deciding Where To Travel When trying to plan your backpacking trip, it can be overwhelming. There are so many things to see & do in the world! So, the first thing to establish is WHERE you want to travel. Ask yourself: What am I interested in? Crystal River - The most beautiful river on earth [Pics] - StumbleUpon Cano Cristales - Crystal River. River of five colors, as the locals call it, originates in the south of the mountain chain Macarena, Colombia, and flows eastward to its confluence with the Guayabero river. In the Cano Cristales found five colors: yellow, blue, green, black and red. All of them are waste product of many algae and, depending on time of year, color saturation, or weakened or strengthened.

Make Something Cool Every Day If you are a beginner photographer or designer looking for an easy way to success, then all you need to do is one project. That’s it! Only this one little “365 project”. 1 hour a day, for the rest of the year doing something creative, and nothing more! Everyone can sacrifice 1 hour a day, right? Of course, it’s not as easy as it sounds – those who’ve tried it know. 41 Places To See Before You Die (Part II) No matter how advanced our cities and technology is, eventually we get tired of all the noise, stress and crowd of the city and want to be in the nature. Humans have transformed Earth beyond recovery, but luckily not everything is lost yet. Beautiful mountains, blue water lakes, magnificent oceans with fabulous islands – our planet has many breathtaking places and awe-inspiring sceneries just waiting for you to discover them. However, life is short, and the funds are limited, so we have to narrow down the selection.

6 Things You Can Start Today to Build A Life Working from Anywhere I recently had the pleasure of speaking at an event in London on the topic of ‘How to Build a Life Working from Anywhere’. The challenge for me was how to distill 7+ years of running my own business, with 5+ years of those being location independent with a fully online business, into just an hour’s talk. I know how it goes with these kinds of talks. Luxury Anantara Kihavah Villas, Maldives Luxury Anantara Kihavah Villas Resort, Maldives Luxury Anantara Resorts opened Anantara Kihavah Villas earlier this year in the beautiful Maldives. Located on the Baa Atoll, only 35 minutes by seaplane from Male International Airport. You can expect the morning sun dappling the crystal-clear waters of a secluded lagoon. And your afternoons spent sunbathing by your private infinity pool, just steps from the Indian Ocean. An evening stroll across soft white beaches, the moonlight casting shadows on the sand.

20 Must-See Indie Movies of Summer 2011 [VIDEOS Typically, when you think of summer movies, you conjure up images of big budget superhero flicks laced with explosions and special effects starring mega superstar A-list talent. If you’re more than a little sick of seeing the litany of sequels barraging your eyeballs, IndieWIRE released its list of the 20 must-see indie films of Summer 2011 that you might want to check out. After this, you can ask out that hipster environmentalist chick you’ve been blabbering about. See IndieWIRE’s picks below. Page One: A Year Inside The New York Times (June 17; Magnolia Pictures)

10 Unique And Amazing Places on Earth Our World After seeing “10 More Amazing Wonders of the Natural World”, which many contained places I had never even heard of, I was inspired to make my own list. This list differs from the previous in that it contains things which may not be stunning to behold, but are unique for their size, location, or natural impact. Essential packing list for backpackers Two of our friends are starting a three month backpacking trip around South East Asia in January and recently they have started asking us what they should buy or put on their Christmas list. So I thought it would be good to share with you guys; some of the things we can’t live without, stuff we ditched within the first month, what we have picked up on the way and others that are now on our wish list (but either lack of money or unavailability have stopped us from getting). Our Essential Packing List for Backpackers Things we can’t live without