How to start a revolution [NSFW] 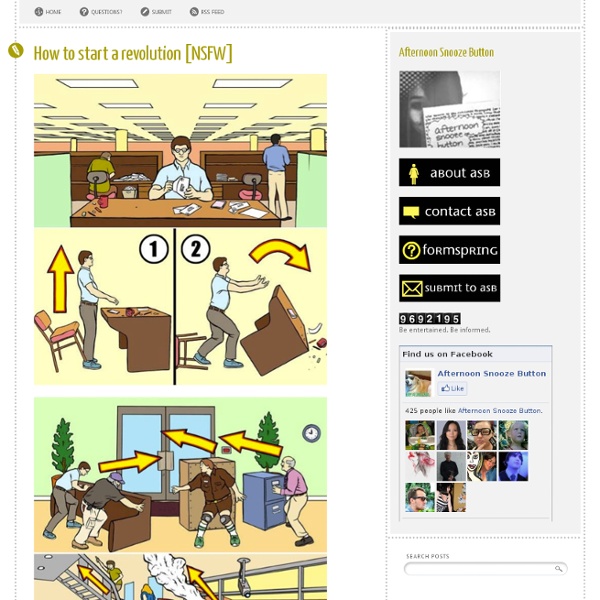 The Life of Python – 20 Greatest Monty Python Sketches The Holy Grail of Python’s 20 most hilarious sketches, celebrating their 40th anniversary. This Anniversary Special marks the day that Monty Python made its sparkling debut on television when the very first episode of Monty Python’s Flying Circus was aired on the BBC on 5 October 1969. The irresistible Oxbridge partnership of John Cleese , Eric Idle , Graham Chapman , Michael Palin and Terry Jones , mixed with the dazzlingly surreal artworks of American Terry Gilliam , celebrates four decades and 45 episodes of risqué silliness. The comedy of Monty Python was streaks ahead of its time. Famous for its innovation and radical splendor, Python sketches broke the mould of building to a specific punchline, delivering some of the funniest and most enduring sketches of our lifetime. In honour of 40 phenomenal years of comedy, we take a look at the 20 greatest Python sketches ever. 1. Undeniably the most popular and well known of the Monty Python sketches, and for good reason too. 2. 3. 4. 5. 6. 7.

Top 10 Famous People Who Didn’t Actually Exist Thanks to urban legends, pranks, and the use of pseudonyms, there have been a number of people who managed to get famous without having to go through the hassle of actually existing. Some were used for shady marketing purposes, others served as tools for building hoaxes, and one was even responsible for encouraging early medieval expeditions into Asia. In each case, the air of mystery that surrounded them only helped to build up their false celebrity. Here are the top ten famous people who didn’t actually exist: 10. It seems that every few years, rumors arise about mysterious athletes in obscure countries whose talents are guaranteed to change the future of sports. 9. At some point we’ve probably all looked at a piece of modern art and thought: “anybody could have painted that.” 8. 7. These days, there are plenty of people who are famous for not really doing anything, so it only seems fitting that someone could become a celebrity without ever actually existing. 6. 5. 4. lonelygirl15 3.

Animals in funny situations Not everyone owns a pet, or has the chance to come across any animal daily for that matter, so it’s refreshing to see some of them captured in funny and interesting situations. Funny situations are around us in everyday life. All we need to do is to spot it. These photos will not leave anyone indifferent, animals can be so funny . Wrap rage An example of wrap rage with a plastic light bulb package. Background[edit] Packaging sometimes must be made difficult to open. For example, regulations dictate that some over-the-counter drugs have tamper resistance to deter unauthorized opening prior to the intended customer and be in child-resistant packaging. Hard plastic blister packs also protect the products while they are being shipped.[2] In addition, using transparent plastic allows consumers to view products directly before purchasing them.[3] The term wrap rage itself came about as a result of media attention to the phenomenon. Frustration and injuries[edit] Consumers sometimes use potentially unsafe tools such as razor blades, boxcutters, snips and ice picks in their attempts to open packages.[2] In the Yours survey, 71% of respondents said they had been injured while trying to open food packaging. Solutions[edit] Packaging design[edit] Several methods of making packages easy to open have long been available. Opening[edit]

Face to Face with Most Dangerous Animals Forget about BeetleCam and other devices. A British photographer risked his life as he captured these wildlife shots. Here you can see some exotic animals. 1. Jonathan Griffiths held his camera just inches away from tigers, bears and cougars as he took the pictures. (Jonathan Griffiths/Solent) 2. 3. 4. 5. 6. 7. 8. 9. 10. 11. 12. 13. 14. 15. Oh They're So Surprised! Oh They’re So Surprised! Posted by SHMO on November 5, 2012 · 124 Comments What if the animal kingdom could understand the dramatic presidential election? What if they could comprehend the shocking nightly news? What if they could understand the latest gossips from our weekends… “She left with who? …We figured they might look like this…

10 Weird and Mysterious Places on Earth digg 1. Mystery Spot Mystery Sport is a tourist attraction near Santa Cruz, California, famous because of its disrespect to the laws of physics and gravity. The odd cabin, although seems like lying on flat ground, makes those who enter inside swinging all the time. The most probable theory that tries to explain this says that it’s all about “tilt-induced visual illusion. 2. The question about the triangle that swallows ships, planes and all the people with them still waits for its answer. 3. Socotra is archipelago the Horn of Africa and Arabic Peninsula, but the main island of Socotra is 95% of the whole landmass, while the rest is just small islands. 4. Mount Roraima is located on the triple border point between Brazil, Guyana and Venezuela. 5. Rio Tinto is located in south-western Spainand originates from Sierra Morena mountains of Andalusia. 6. The Fly Geyser, near Gerlach, Nevada, is strange because it somehow grows up. 7. 8. 9. 10. Source: urbantitan

Most popular photography on StumbleUpon! 2011 is over, In this article, I am showcasing the most beautiful photographs that were stumbled on StumbleUpon. Let us take a look at this truly jaw-dropping collection and enjoy! Source: StumbleUpon *None of the images on this page are mine,they were found on StumbleUpon, meant to inspire.Any problems, just email.